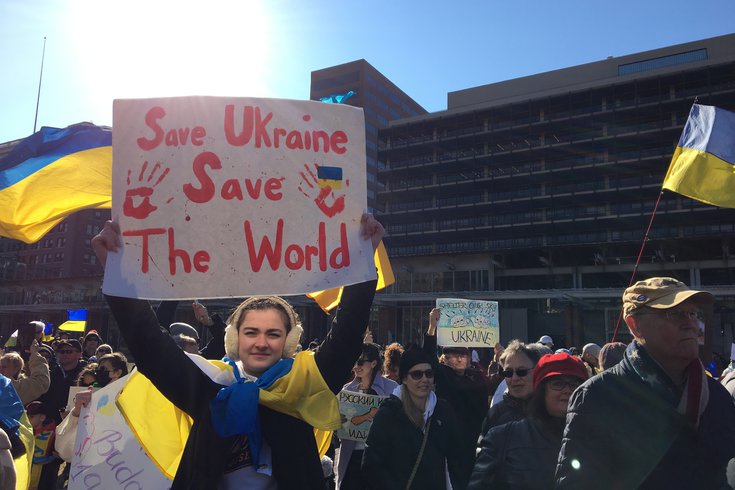 Demonstrators at a pro-Ukraine rally that happened on the Independence Mall in Old City on Sunday, Feb. 27, 2022.

After the long-simmering war in Eastern Ukraine exploded into an all-out Russian invasion on Thursday, Ukrainian Americans and their supporters in the Philly area jumped into action.

There are roughly 15,000 Ukrainian immigrants and 60,000 people with Ukrainian heritage in the region, a large proportion of whom are concentrated in Northeast Philly. The Philly area's Ukrainian community is the second-biggest in the country.

Many are trying to support their embattled homeland by attending rallies, staying in touch with relatives and collecting donations to be sent to the war zone.

Ukrainian forces have been at war with pro-Russian separatists in the easternmost parts of the country since 2014, but the possibility of a full-scale Russian invasion seemed unlikely to many Ukrainians until it was carried out last week.

“No one thought that without warning they would go to sleep and they would get up to coordinated bombings,” Katerina Manoff, a Ukrainian American University of Pennsylvania graduate and native of Kyiv, the nation's capital, told CBS3.

She runs a non-profit called ENGin, which connects young people in Ukraine and the English-speaking world.

The Ukrainian forces are well-trained given that they've been fighting 2014 and have seen some success against the Russians.

Although Russians have occupied some parts of the country, the capital of Kyiv was still in Ukrainian hands on Sunday before a meeting between Russian President Vladimir Putin and Ukrainian President Volodymyr Zelenskyy.

Over 350,000 Ukrainians have fled to neighboring nations including Poland, Slovakia, Hungary, Romania and Moldova, but many Ukrainians still remain in their hometowns.

“A lot of them are spending every night in a shelter, especially in Kyiv because the bombings are so frequent,” Manoff said.

Kensington's Oleg Bogdanovych, a Ukrainian immigrant who came to Bucks County when he was a teenager, is now planning on heading back to his homeland to be with his family in Kharkiv, Billy Penn reported.

That's the nation's second-biggest city and lies just 12 miles from Ukraine's eastern border with Russia. It was stormed by Russian troops this weekend, BBC reported.

Bogdanovych plans to fly into Poland where he will buy a car and drive into the war zone.

He'll be bringing with him a cache of supplies including everything from socks and water filters to medical supplies and body armor. Much of this stash was purchased with donations Bogdanovych was able to gather online.

He plans to fly out of Newark International Airport on Monday, possibly on donated frequent flier miles.

Many Ukrainian Americans in Philly gathered last week to rally for peace in their homeland and to demand additional American support for the Ukrainian forces fighting the Russians.

“I can’t be back home shooting Russians, so this is the only thing I can do," Ukrainian immigrant Max Koshel told the Inquirer at a rally with more than 200 participants in front of City Hall on Friday.

The U.S. and many of its allies have put new sanctions in place on the Russian economy in response to the invasion. Following an initial round of sanctions on Thursday, the U.S. and its allies have committed to barring some Russian financial institutions from the SWIFT banking system, which is important for carrying out international transactions.

But many who rallied in Philly last week believe the U.S. needs to do more.

"President Biden needs to act now," Iryna Mazur, the honorary consul general of Ukraine in Philadelphia, told CBS3 on Friday. "The sanctions have to be stronger.”