New report ranks Philadelphia as the 25th-worst city in the U.S. in which to find a job 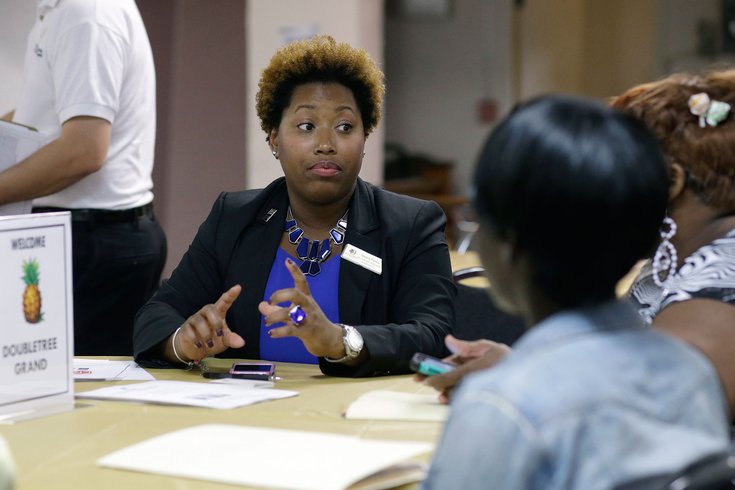 In this Friday, Jan. 23, 2015 photo, Natalie Parker, director of human resources at the Doubletree Grand, left, talks with job applicants during a job fair at the Hospitality Institute.

The bad news: A new study has ranked Philadelphia as the 25th-worst city in the United States in which to find a job.

The good news: The situation is already improving.

WalletHub created its 2016 list of the Best and Worst Cities to Find a Job using 17 measures of job-market health and the socioeconomic environment. Philly came in at No. 126 out of America's 150 biggest cities, which is a better rank than Los Angeles but worse than Baltimore or Cleveland. Pittsburgh ranked well above, coming in at No. 40 on the list.

Thankfully, one of the measures that contributed most to Philadelphia's poor score is already better: the unemployment rate. WalletHub used data taken from when Philly's unemployment rate was 8 percent, but the latest, non-seasonally-adjusted numbers have the rate at 5.9 percent.

Still, the list shows areas where Philadelphia lags behind its peers. The median annual income is at the bottom 10 level of the country, the vast majority of people with disabilities are unemployed, and one-tenth of workers live under the poverty line.

Here's how Philadelphia stacks up on some of the statistics that went into WalletHub's formula. Job opportunities, employment growth and the unemployment rate had the most weight of all the factors.

The data ranges from 2014 to 2015 and comes from a variety of sources, including the U.S. Census Bureau and the Bureau of Labor Statistics.

If you want to move to a city with a better job climate, head to Texas, or the heartland. Here are the top 10 cities on the list:

And the bottom cities:

*Industry variety is calculated by finding what percent of jobs in a market are in each industry, then taking the standard deviation of those percentages. The smaller this number is, the more diverse the job market is, because it is not dominated by one or two big industries.