Inside the mind of Adolphe Alexander, Philly's mad scientist

Kensington designer builds everything from 3-D printers to hydroponic gardens 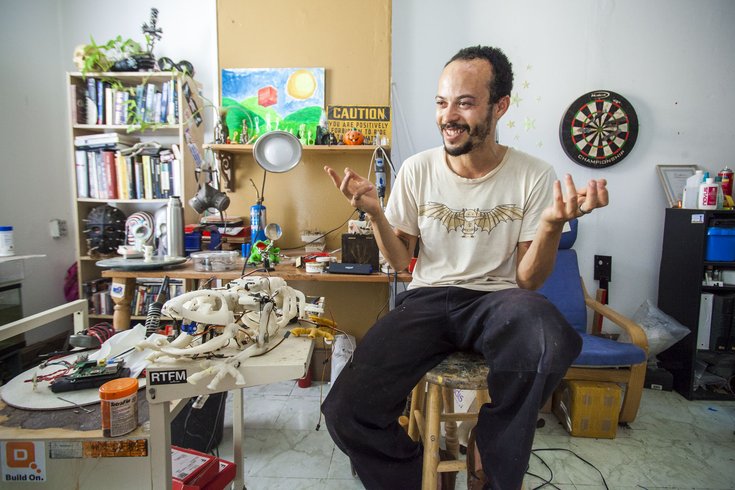 Adolphe Alexander, a self-described "Passive Enabler", explains the mechanical functions of Baki, the 3D printed frog that sits on the table to his right.

Walking into Adolphe Alexander's Kensington home is like entering a scene from "Back to the Future"; like Doc Brown's laboratory, each shelf is filled with tools and materials, projects both started and finished.

On one shelf rests an antenna that when brought to life in a dark room, shoots off mini bolts of lightning. On another lies the skeleton of an overgrown frog - not a real one, but the inner workings of a mechanical puppet-like creation named Baki.

GALLERY: Inside the home of Philly's mad scientist

Part scientist and part artist, Alexander is like any other high-energy, happy-go-lucky genius you've ever met. He speaks at the speed of light, discussing his many passions so fast it's often hard to keep up. Before you can take in what he's just said, Alexander is onto something new, making unlikely connections between topics and swinging through the conversation on verbal monkey bars. You might have no idea what he’s talking about, but you get the sense very few people would. 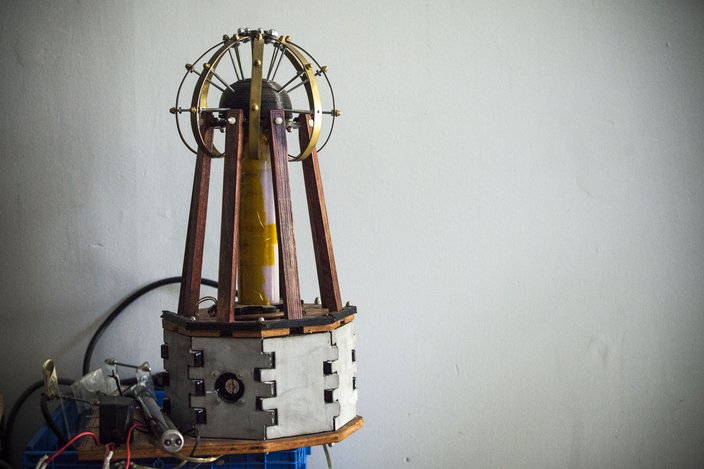 He's the epitome of the "forward slash generation," in which everyone is a multitalented entrepreneur-slash-DJ-slash-writer. Trained as a mechanical engineer, he also is a designer, inventor, gardener and sculptor, all of which fall into his business, Namagasta. Like a mad scientist for hire, on any given day he might be designing desert goggles or completing plans for a three-story townhouse renovation. His skill set is specific and advanced enough to carve out a niche market for his work, but broad enough to ensure he never gets bored.

His business card reads "Adolphe H. Alexander, Passive Enabler." By his own description, he enables others to bring their ideas to life by passively designing with a computer. Whether others would describe his creative force as passive is unlikely.

Much of the time you can find Alexander in his office, with one of five screens networked to a high-powered laptop rigged with 16 gigabytes of RAM. If he's not there, check the basement, where you'll find space for growing plants in the winter, a few bikes and a 3-D printer. It’s not just any 3-D printer; he built it himself, using grout and pieces of a toaster for the printer head. 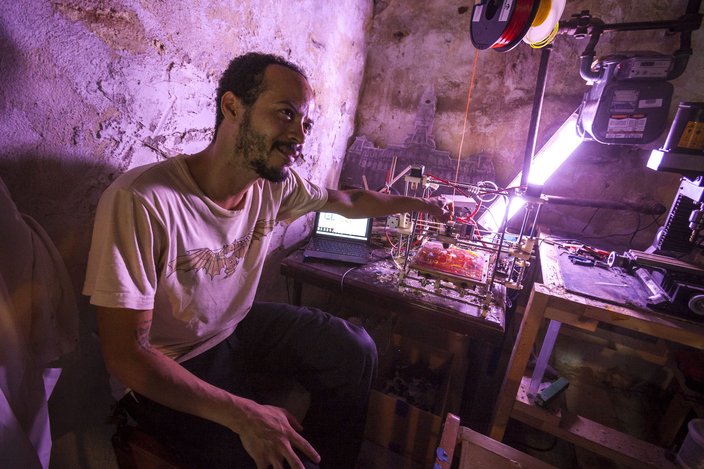 Alexander shows off his homemade 3D printer which he uses to build larger-scaled components. (Thom Carroll/PhillyVoice)

With one foot in the future and one in the past, Alexander designs devices for a world that has yet to exist (and in the case of an antenna he built to broadcast electricity, maybe never will) while lamenting the passage of bygone technologies. Like the whimsical, flourishing community garden across the street from his home, Alexander's ideal world is one where everyone is accountable for their own surroundings. Rather than discarding ugly fruit from the grocery store, we'd grow it in our backyards. Instead of depending on oil for power, we'd make our own, and we'd be more responsible citizens for it. 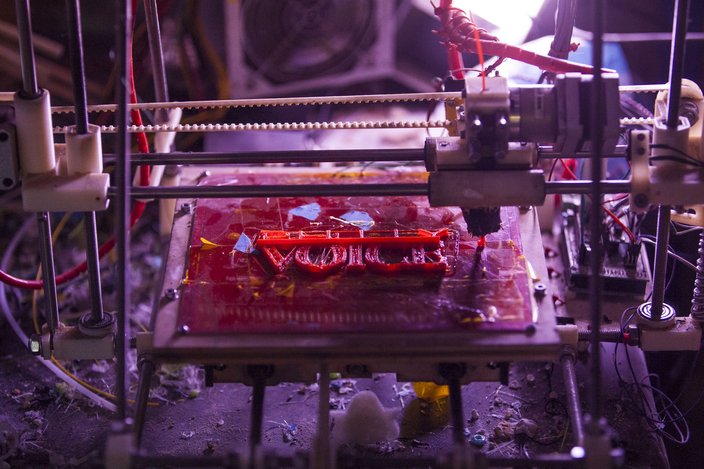 "Right now it's OK to pollute the Delaware River, but it's not OK to put a water wheel in it," he told PhillyVoice, sitting among his many inventions on a late-summer day.

For Alexander, creating sustainable things and using natural materials isn't a lofty philosophy or trendy tree-hugging; it's just logical. Take his frog, Baki. He admits it might not look like a store-bought toy, but that's because its parts were printed using PLA, or polylactic acid, a biodegradable thermoplastic derived from vegetable products. It might not look perfect now, but when completed, the strong plastic will be covered by a fabric skin, hiding the inner mechanics that will one day make Baki a high-tech, Linux-powered animatronic with cameras for eyes. 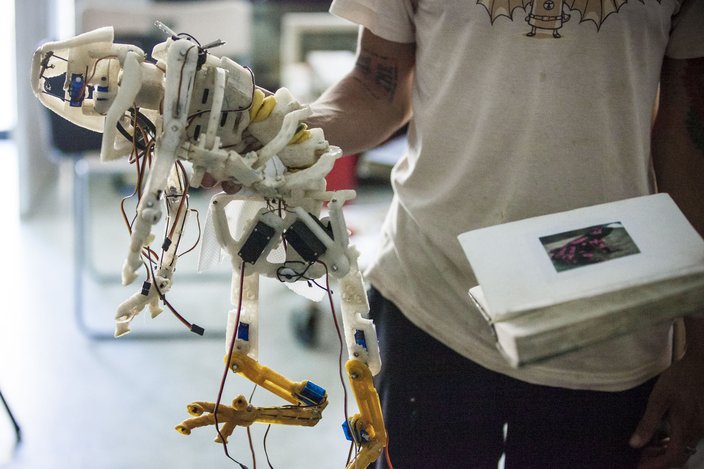 Baki, the 3-D-printed frog that Alexander is creating. (Thom Carroll/PhillyVoice)

The inventor's green leanings have led him to create quite the home garden, too. Radishes, jalapeños and mysterious melons of unknown origin grow in front of his home. A small, dying carrot will be plucked from the bed for an afternoon snack. Out back, he built a rainwater filtration system and turned a concrete slab into a flower bed full of plant life, guarded by a nameless kitten that wanders onto the property and into Alexander's house when the mood strikes. 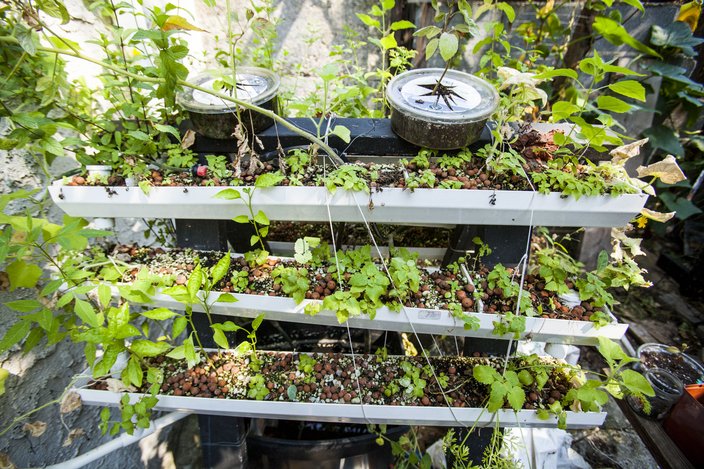 Considering his ideals and how in tune he is with nature, it might not come as a shock that Alexander isn't really into the current media landscape.

"I like to make fun of people who have TVs,” he said. “It’s just so controlled. They show you whatever they want, in whatever order they choose to. It’s kind of weird. I’ve got so many other things I’d rather watch!"

It’s surprising Alexander has any time to watch YouTube, his outlet of choice; when he's not designing work for others, he's creating art for himself. On the computer, he composed a small, silver elephant head, tusks and all, and had it fabricated through an online business. It has a hole where its "third eye" would be for hanging as a hook and a loop in the back in case the eventual buyer wants to wear it as a pendant. 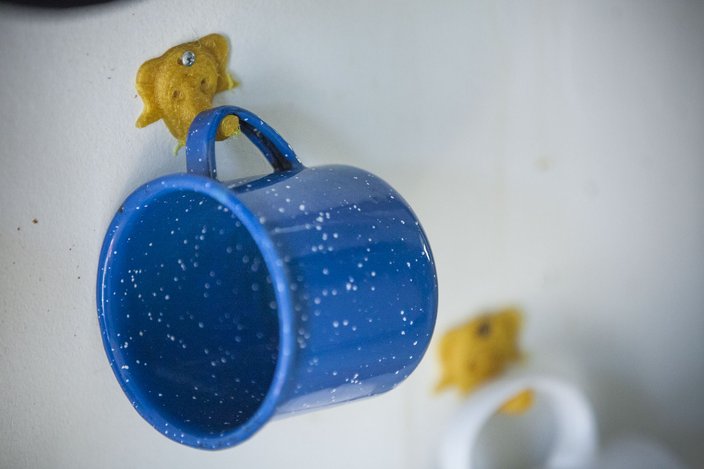 For now, the head is tucked lovingly in a box, across the room from a dish of 3-D-printed plastic hooks modeled after it. In his kitchen, pots and pans hang from these tiny elephant trunks. A hand-sculpted clay figure reminiscent of the "Creature from the Black Lagoon," made as a study in symmetry, stands on a nearby shelf. Alexander brought it to GM Casting on Jewelers' Row to have it cast in silver, too; the result looks like an action-figure-size suit of armor. 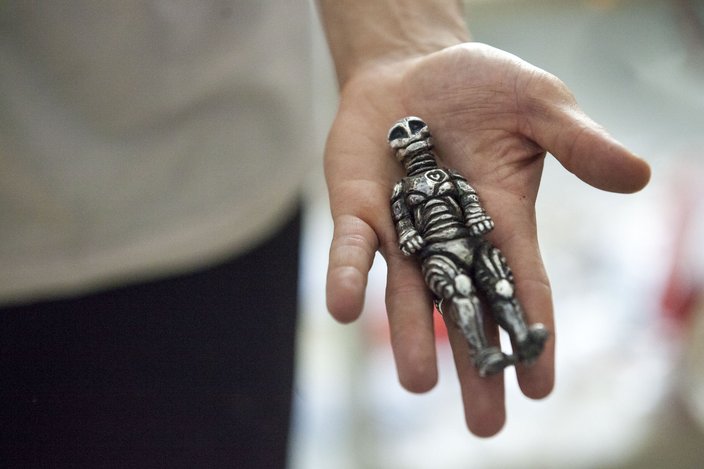 Alexander hand-sculpted this figure from clay that was then cast in silver at GM Castings Inc. on Sansom Street. (Thom Carroll/PhillyVoice)

Hidden away down his narrow Kensington street, Alexander won’t have buyers and clients stumbling on his creations anytime soon. His thoughts on advertising and its evils are similar to his opinion of TV, and his modest website does little to betray his creative output. He prefers a very organic marketing strategy that tidily sums up his stream-of-consciousness personality.

"If somebody wants something from me, we’ll find each other."