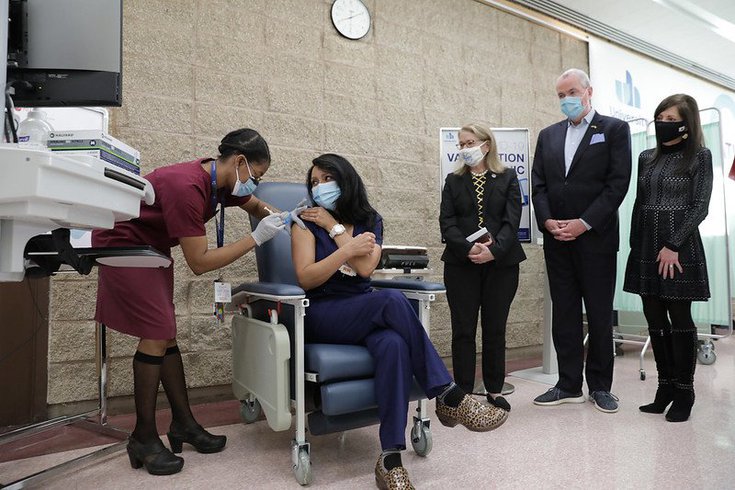 Vaccination eligibility will expand on Thursday, granting vaccine access to people in Phase 1b of New Jersey's vaccine plan. Medical workers and those at long-term care facilities are included in the current of Phase 1a.

Officials said they will simultaneously vaccinate people in both groups, as Phase 1a is not completed.

"These are folks who have been as much in harm’s way as our frontline workers and who often have been called upon for emergency medical support," said Gov. Murphy.

Law enforcement and fire professionals were recommended by the CDC's Advisory Committee on Immunization Practices (ACIP) to receive the vaccine next, due to their status as essential workers with a high risk of exposure to COVID-19, said New Jersey officials.

Recommendations were also made based on the limited number of vaccines available.

"These are our frontline responders, who through their jobs, have a greater risk of coming into contact with infectious individuals or infectious materials, said Health Commissioner Judy Persichilli during a briefing. "Many police and fire personnel are first responders in their municipalities, so they are a priority group within 1b."

Phase 1b also allows other "frontline essential workers" and residents over age 75 to get the vaccine.

Around 130,000 of 650,000 people included in Phase 1a have been vaccinated as of Wednesday. But the number of people vaccinated may be under-reported and "under-cutting the amount of shots that have been actually delivered," said Murphy.

More than 450,000 people also pre-registered to receive the vaccine on Tuesday when New Jersey launched its online vaccine portal, despite temporary issues with the site. The portal appeared to be fully functional by Wednesday morning.

One of New Jersey's vaccination mega-sites at Rowan College in Gloucester County will also open Friday, providing vaccinations to those who are eligible.

Another 104 new deaths occurred as of Wednesday afternoon, bringing the statewide total to 17,464. The number of probable deaths is now 2,059.