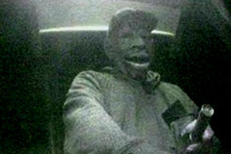 Police say this masked man broke into a home and bound the woman inside with duct tape before ransacking her home.

Police in Tredyffrin Township are looking for a man they say broke into a home wearing a Halloween-style mask, tying the woman inside up with duct tape and ransacking her home.

Authorities say the incident occurred Saturday around 1 a.m. when the victim awoke to the suspect standing over her bed at her home on the 100 block of Crestline Road in Strafford.

The suspect used duct tape to bound her down, telling her, "be quiet and you won’t be hurt," police say.

Intimidating the victim with a stun gun, the robber was able to get the woman to tell him her PIN number for her ATM card, police say.

After making off with jewelry, a radio and the victim's ATM card, he fled in the victim's car and went to the nearby Wells Fargo Bank in the Devon Square Shopping Center and used her card at the ATM machine, according to authorities.

A photo taken at the machine shows the suspect wearing a mask and gloves while making a transaction with the victim's card.

The suspect is described as standing 5'10" tall and weighing about 180 pounds with broad shoulders. The mask he was wearing had a "bulbous-style nose," according to police.

Anyone with information on the suspect is asked to call Detective Michael Carsello of the Tredyffrin Township Police Department at 610 644-3221.