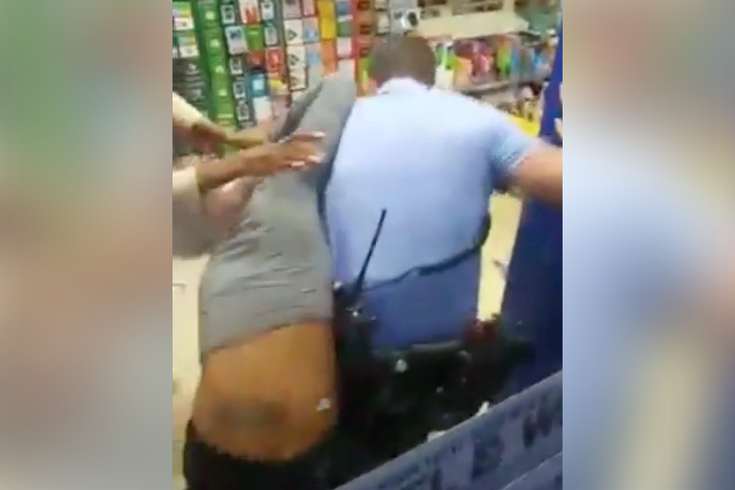 Video shows two women destroying the inside of a Philadelphia 7-Eleven and then wrestling with a Philadelphia police officer. Both women were arrested and face charges in connection with the incident.

A viral video of the fracas at a Philadelphia 7-Eleven shows two women trashing the store, attacking an employee and one of them allegedly threatening to burn the building down, police say.

The video was posted to Facebook on Tuesday by the Daily Mail, a British tabloid, and has been viewed more than 2 million times. The recording shows the altercation in which two women appear to be trying to leave the store and a man, apparently an employee, refuses to let them exit.

The women and one of the men inside are seen getting into physical altercations in the video, and at one point the man appeared to spray them with mace or pepper spray. The women also were recorded on video allegedly throwing merchandise onto the floor.

Eventually, a Philadelphia police officer arrives. While he attempted to detain one woman, the other woman tried to get his attention from behind and he tries to keep her away. The struggle escalated between the officer and one of the women after he appeared to grab her arm and the woman allegedly attempted to hit him in the chest.

The officer then grabbed her by the neck, tackling her into a store shelf and punching her as she appeared to attempt to put her arm and leg around his neck.

More officers arrive, and both women are taken out in handcuffs. You can watch a full video of the incident, which contains explicit language, below:

An incident report obtained Tuesday from Philadelphia police identified Lashae Whitaker, 20, and Tierra Brown, 28, as the women seen in the video, which was recorded at the 7-Eleven on the 5000 block of Frankford Avenue.

According to police, an employee was working at the store at about 2:15 a.m. on Oct. 1 when Whittaker and Brown entered. The clerk asked them to leave because of a prior altercation, police said.

The pair allegedly "became irate and started knocking merchandise onto the ground" and punching and kicking the employee several times. Brown then allegedly took a bottle of lighter fluid, squirted it onto the floor and threatened to burn the store to the ground.

Whitaker and Brown also punched and kicked the officer who initially responded to the incident, police say. The arresting officer for both women was Philip Riotto, court documents state.

Both Whitaker and Brown have been charged with causing or risking a catastrophe, aggravated assault, possession of an instrument of a crime, terroristic threats and related offenses.

According to court documents, both Whitaker and Brown had their bail changed on Tuesday from 10 percent of $25,000 to $25,000 unsecured, meaning they would not have to post anything to be released from Riverside Correctional Facility, where they have been held since Oct. 2. It was not immediately clear if either had been released, yet.

A preliminary hearing for both women is scheduled for Nov. 17.