Vatican says pope will embrace the revelatory power of images 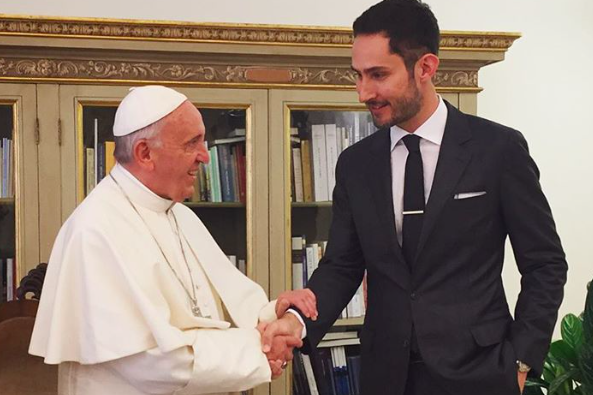 Four years after launching his @Pontifex Twitter account, Pope Francis has distinguished himself as a holy roller on social media, racking up a solid 8.89 million followers who want to read his daily prayers and exhortations. On Saturday, he added another account to his repertoire: Instagram.

Following a Thursday announcement from the Vatican Network, Pope Francis launched his @Franciscus account Saturday, collecting 100,000 followers within an hour. In his first photo, he was joined by Instagram CEO Kevin Systrom.

In February, Pope Francis met with Systrom in Rome, where he was given a curated book of more than 10,000 images from around the world.

According to the Vatican, the pope's desire to launch an Instagram account stems from his conviction that images have the power to reveal many things, including the qualities of closeness and inclusion that have defined his message since he was elected to the papacy in March 2013.

As Digital Trends notes, the decision to embrace the public eye comes after the Vatican hired a former BBC chairman to revamp its communications strategy.

“It’s only recently [that] the scope of what this possibly could mean for the church has really started to affect people’s thinking. I think they are moving from an approach that sees contemporary media as a source of contamination to an understanding that there are ways in which contemporary communications technology allow for a different way of engaging with people of faith, both within and outside the Catholic Church.”

While it remains to be seen what kind of images Pope Francis intends to share, we can likely expect to see scenes from around the globe as he continues to meet with world leaders and address themes of unity in times of social unrest and political crisis.