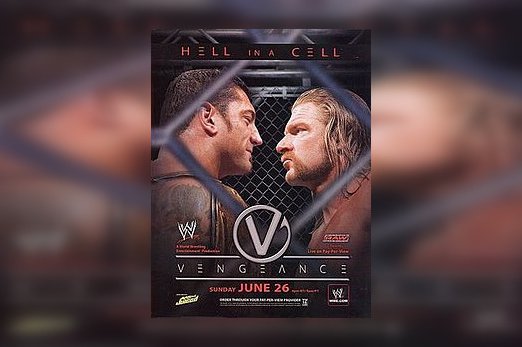 The poster for WWE's 2005 Hell in a Cell match between Batista and Triple H.

In 2005, there was a monumental change going on in WWE. No, it wasn't Vince McMahon stepping down (he's still the chairman and CEO of WWE), it wasn't yet WWE deciding to relaunch ECW as a third brand (they would the next year), nor was it the aforementioned McMahon deciding to revive the XFL (that would have been 13 years too early).

No, the monumental change going on in WWE at this time was simultaneously creating two new superstars that have already cemented their legendary status in WWE lore. In fact, it may be the last true time WWE set the foundation for and around these two superstars that allowed them to flourish and realize their dreams.

That's right — it was the beginning of John Cena's and Batista's meteoric rise to the top, where they stayed for years and years. And at WWE's June 2005 Vengeance pay-per-view, live from the Thomas & Mack Center in Las Vegas, it was a showcase for both during the height of WWE's brand extension.

At this time, WWE was still running brand-exclusive pay-per-views, so Monday Night Raw and SmackDown (which would eventually move to Friday nights later that summer) ran pay-per-views that featured only talent on their roster. The funny thing about Vengeance 2005 was that it ran right in the middle of WWE's Draft Lottery that year, which ran for four weeks during June. Each week, wrestlers were drafted to either Raw or SmackDown. A few weeks before this pay-per-view, the WWE Champion, John Cena, was drafted to Raw. Batista, who had been on Raw as the World Heavyweight Champion since WrestleMania 21, was also still on Raw.

So, needless to say, this pay-per-view was one of the more packed ones in the era of brand-exclusives. Not only would WWE's two champions headline the show, but Kurt Angle made his way from SmackDown to Raw, continuing his feud with Shawn Michaels in the duo's second bout together, first since WrestleMania 21. Of course, it was a classic. What else would we expect?

Just because it was 2005 doesn't mean WWE completely was over the Attitude Era. While much of that era's content was shunned at this point, there were still bits and pieces that filtered through the cracks in 2005. And when Lillian Garcia found herself involved in a love angle with Viscera, and proposing to him in Vegas ... only one person could interrupt: The Godfather.

There's also so much more to talk about, as we discuss the most recent WWE releases. We begin our deep dive into WWE Vengeance 2005 at the 48:35 mark.