Organizer: 'The mummers parade has historically been a racist, white parade' 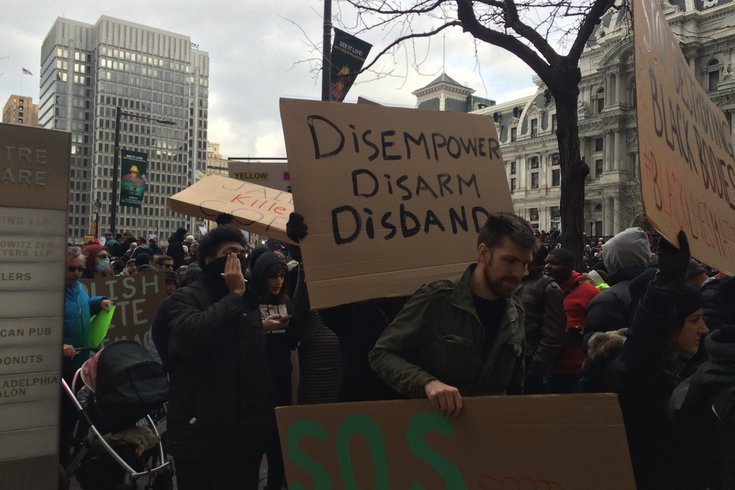 Demonstrators hold signs and march during the 2016 Mummers Parade.

A gathering of about a hundred protestors rallied in the shadow of City Hall on Friday as the booming sounds of the 2016 Mummers Parade echoed throughout the streets.

According to Megan Malachi, 34, of Mount Airy, organizer of the protest and member of the Action Against Black Genocide, the protestors focused their ire on several social justice issues, including police brutality, a raise for fast food workers and, especially, racist undertones of the city's annual Mummers Parade.

"The mummers parade has historically been a racist, white parade," she said.

As a child, Malachi said, her parents didn't allow her to visit the parade due to the "racist" attitude she saw exhibited by those marching or attending the parade. 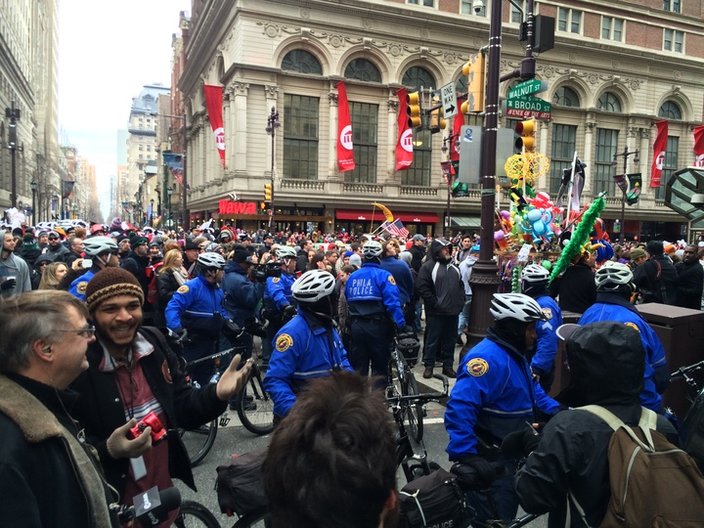 Police were on the scene when demonstrators gathered during the 2016 Mummers Parade.

"As a child, I wasn't allowed to come the the parade because my parents were worried about what could happen around racist white people," said Malachi.

At about 1 p.m, while mummers performed just feet away, protestors gathered on the Market Street sidewalk across from City Hall, chanting "No justice, no peace. Take it to the streets and f*ck racist police!" and "Shut it down! Shut it down!"

Erica Mines, 37, of North Philly, an organizer and member of the Philly Coalition for R.E.A.L. (Racial, Economic And Legal) Justice, said that racist aspects of the Mummers Parade have gone on for far too long.

Even with a new division in this year's parade - the multi-cultural Philadelphia division - added in an effort to include more minorities in the parade, Mines said the effort was "too little, too late."

"The mummers, as a historic institution, has done nothing but make a mockery of minorities," she said.

Pointing to examples of mummers groups wearing black face in the past - and, in this year's parade, one group in a Mexican theme that wore "brown face" - Mines said that the city allowing the parade to continue was a "slap in the face" to minority communities throughout Philadelphia.

As of 2 p.m., protestors had marched towards Broad Street and continued down along the parade route. The arrests of at least two protestors has been reported.