Chris Emery, 29, spent a dozen years as a Dorney Park associate before a new interview process disqualified him from employment 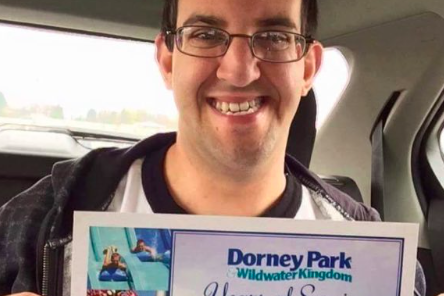 An intense social media backlash against Allentown-based Dorney Park has led the company to rehire a special needs worker whose assessment during a new interview process disqualified him from returning for the 2016 season.

29-year-old Chris Emery was prepared to enter his 13th season at the amusement park when he was informed of the new interview requirements, which included group testing activities such as the construction of a train made of Lego blocks. On Thursday night, Emery learned that he "didn't fit in" with the revised hiring criteria and that he would be given an opportunity to reapply in 30 days, The Morning Call reports.

Emery's mother, Claudia, was outraged by what she believes is a policy to discriminate against workers with special needs. Chris had been working in Dorney's park services primarily as a bathroom custodian, which does not require many of the problem-solving skills assessed during the new interview process. He had even been recognized several times in the past as Employee of the Month.

Unwilling to submit her son to another round of humiliation, Claudia and the Emery family were left devastated by the park's crass decision.

After reports of Emery's situation were circulated by his co-workers Friday morning, thousands of outraged supporters took to social media to condemn Dorney Park for its apparent exclusionary practices.

@DorneyParkPR you didn't hire this gentleman back? I swear you'll never see another dollar from me or my family pic.twitter.com/136aoobkMH

The reaction was so forceful that Dorney Vice President Mike Fehnel eventually responded with an offer to bring Chris back for the 2016 season. 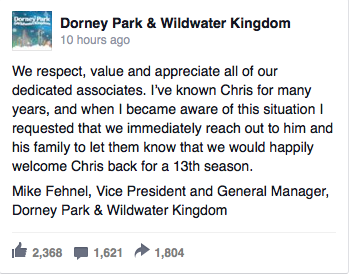 After hearing the good news, Chris told The Morning Call he felt "happy and proud" that his colleagues and the public quickly came to his defense.

Officials at Dorney Park, owned by Ohio-based Cedar Fair, said that company policy prohibits harassment and discrimination against its associates for any reason. Though the new interview process was designed to identify candidates who can best deliver quality guest services, Dorney park will review the process to determine if any changes are required.