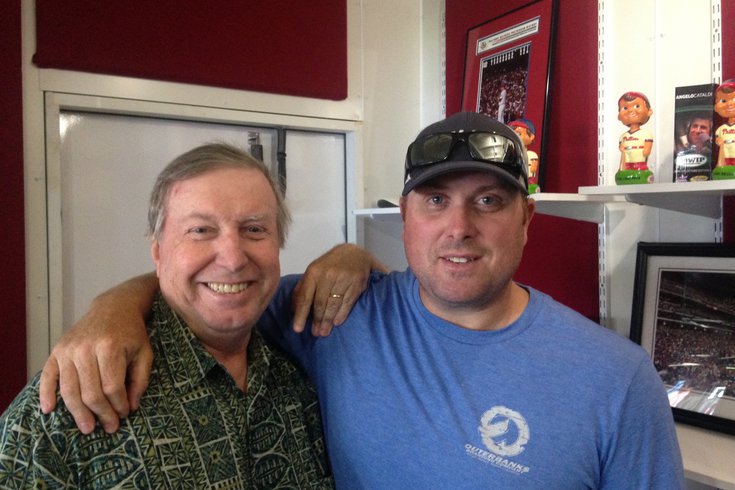 Ray with his son David.

Ray Didinger can remember the first time he went to Connie Mack Stadium as a kid. Before actually visiting the fabled old ballpark, his only point of reference was seeing the Phillies play on black-and-white TV. The place on North 21st Street and West Lehigh Avenue filled a city block and young Ray marveled at the blinking Ballantine Beer scoreboard and the emerald green grass.

When he embarked on what turned out to be a Hall of Fame sports writing career and into a local media icon, he thought he could separate himself from the little boy that was a fan to the media giant he became.

On Sunday, Didinger, 75, will make his last broadcast, retiring from over 30 years with WIP on radio and as an integral analyst on NBC Sports Philadelphia’s Eagles Postgame Live show.

In Didinger’s play, “Tommy and Me,” there is a line where the younger version of Ray says to the older version of Ray, “I can’t believe I grew up and became you,” which always draws laughs.

“That’s part of the whole story, because I think that’s how people view me, that I used to be a fan, but now I’m a reporter as if those are two distinct things,” Didinger said. “The fact is, I’m proof that you can be both. You just can’t wear it on your sleeve. When you come on after an Eagles’ game, you have to be a reporter.

“You have to be professional and do your job in a professional way. But that doesn’t mean underneath all of that, that little 8-year-old kid that used to marvel at the Ballantine scoreboard at Connie Mack Stadium isn’t inside you somewhere.”

When he calls quits, Didinger will also be able to do something this fall that even he may not realize: He’s never sat with his son David and watched an Eagles’ game together.

When David was young, he would go to Eagles’ games with his parents and watch from the players tunnel. Working reporters covering games are not permitted to bring their children to the pressbox.

As adults, because of their conflicting schedules, always on the road or working Eagles games at Lincoln Financial Field, the pair never actually sat down next to each other and watched an Eagles game together.

Sports media have traveling lifestyles much like the athletes they cover, sans the inflated paycheck and fan adoration.

“You know, I never realized that, because you would assume that I have watched an Eagles game with my dad,” David said. “When he stopped covering the Eagles on a fulltime basis (for the Daily News) and went to NFL Films fulltime, that’s about the time Eagles Postgame Live started.

“At that time, I had already gone to NFL Films working games. There were a lot of times when I would pop in to see my dad at Eagles games. The last game I sat and watched a game with my dad was Super Bowl 30, between the Cowboys and Steelers in Phoenix (in 1996). That was my dad’s last Hall of Fame vote and I remember him saying it was so weird that he got on a plane and flew back home.

“That was the last football game we sat together and watched a game. It’s kind of nuts to think about.

“That changes this year.”

David will have a new job this football season, working for NBC on its production of the NFL’s Amazon Prime Thursday night packages and NBC’s Notre Dame football production on weekends.

“It’s pretty cool that we’ll be able to do that a lot this season. My dad kind of wished he would roll off into the sunset and my father never made anything about himself. He’s not that kind of person. My dad I can say is a genuinely good guy.

“My dad taught me a lot of things in my life. This whole thing has been overwhelming and humbling to see how people think of him. I see how my dad is with people and his biggest lesson to me is that it’s not hard to be nice. It’s not hard to be a good person. That’s how I look at life and that came from him.”

As the time is nearing to his last broadcast, Ray took the time to pick out what were his best teams to cover, best athletes, best coaches, and some of the worst to cover and most memorable moments.

Ray’s had a visceral impact on the Philadelphia sports scene.

“I would say the Broad Street Bullies. Most people would assume I would have gone football. But it was those guys. They were such a fun team to cover. They were so young and so unspoiled. They were regular guys. They were all in the early 20s, from Flin Flon, Moose Jaw, Smithers British Columbia, and here they were in the big city doing the unthinkable, winning the Stanley Cup and really changing the whole self-image of Philadelphia in so many ways.

“The best part about it was these guys were from so far away, and had so little knowledge of the city’s history that they were learning it and experiencing the success the same as the fans were. It was everybody’s first time—and count me in, too. I was only in the business for a couple of years, but to be thrown in the middle of it, and watch how they impacted the city and see them beat Bobby Orr and the Boston Bruins—and have two million people come out for the parade—that was a fun time and a fun team.”

“Probably Bobby Clarke. I never saw anyone who gave as much night, after night, after night as he did. I never saw a guy play as hard and gave as much of himself every single game as Clarke did. I never saw a guy so driven, and I’ve seen some great ones. In 50 years, I’ve seen a lot of great ones, but I don’t think I saw a guy who played with the kind of fire and relentless determination as Clarke did. He was the toughest competitor I’ve ever seen and the greatest leader I’ve ever seen in sports.”

“It has to be Dick Vermeil. We’re really at a point in our lives where we’re really good friends. It certainly didn’t start that way (laughs). It was neither of our faults. He was doing his job and I was doing mine. But we were on opposite sides of the fence. He was a rookie head coach in the NFL and I was a young beat reporter. He was coaching a lousy team and I was the guy assigned to write about it.

“That put us at odds. I’ll always remember him pulling me aside walking off the practice field and remember him saying, ‘You’re undermining my program.’ I told him I didn’t know what he meant exactly. He told me he was trying to build this team up that had been down for so long and convince them that they can compete and win. If they were going to do it, it had to start with them believing.

“He told me he spent all day preaching that message, and then they go home and read my stories in the paper telling them how lousy they are. I understood what Dick was saying. And he wasn’t wrong in saying it. I told him we’re here, but we’re not coming from the same place. I told him he did what he had to do as a football coach, but I did what I had to do as a reporter and write what I saw. I told him I saw a team that would be lucky to win four games.

“It didn’t mean I was rooting against him. At the time, Dick didn’t get it. He threw his hands up and walked away. But as time went by and he got to see where I was coming from, he understood I was being an honest reporter. Once he got it going, I was writing the stories he enjoyed reading and our relationship took a 180. It’s a relationship that’s turned into a great friendship.

“I’m really going to enjoy going to Canton and being there when Dick is inducted into the Hall of Fame. He deserves it.”

“That’s easy: Super Bowl LII. It was the perfect day. It started with the shouting match with that guy from Boston. I didn’t even want to do that show. They told me we were doing this Boston vs. Philadelphia pregame thing. They told me it would us against them. I told them, ‘no, no, no, I don’t that kind of television. I’m an Xs and Os guy. I don’t want to be a part of a pie-tossing contest.’

“I went on there really against my better judgement. They told me to do it. Sure enough, no sooner than we start than Mike Felger goes on this rant about how Philly fans are violent. I couldn’t take it. Here I am hollering at this guy, doing all of the things that I didn’t want to do (laughs). I couldn’t help it. I felt I had to defend the Philadelphia fans on this day of all days. Everyone told me after it was over that I was great, but I was embarrassed, because I don’t like doing that type of TV.

“Then the game is played, and the game turned out the way it did. It was one of the greatest football games I’d ever seen. It had so many different elements to it. The ‘Philly Special’ and winning it, and seeing Seth Joyner so emotional, and tears in Governor Ed Rendell’s eyes; sharing in all of that. Then David came out, we hugged and I cried.

“Then David told me he got the shot of Nick Foles telling Doug Pederson about the Philly Special, a play that will live forever.

“It was the perfect day.”

Another perfect day will arrive this fall when David and Ray are sitting next to each other, watching their favorite team the Eagles—and being able to yell and scream at the Birds like everyone else.