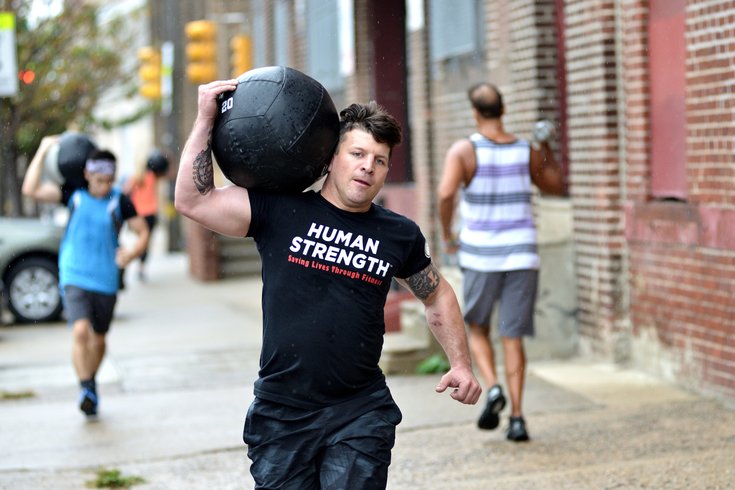 When he got arrested for a DUI almost 10 years ago, Scott Klaverkamp was living in Boulder, Colorado, and self-medicating what he would soon learn was a debilitating form of depression.

His was an exhaustive cycle of stale-beer barrooms, late nights and harried hangovers that came to a crashing end with flashing red lights by the side of the road. It was not his finest hour.

Call it rock bottom, the proverbial wake-up call, but this low point would actually accomplish two things in Klaverkamp’s life: He would finally be diagnosed with PTSD after serving as a navy corpsman for four years active duty and he would be introduced to Phoenix Multisport, a free fitness program for addicts like him.

Back then, if you’d have asked this tough-talking vet if Phoenix’s customized regime of climbing, hiking and strength training, the stuff of boot camps, would realistically stop him from picking up another drink, he might have laughed you out of the room and ordered a shot.

Now a well-respected urgent care clinician in Berwyn, Klaverkemp admits that being forced to face down his demons was probably one of the best — and the hardest — things that could have ever happened to him.

Being immersed with peers who had, for better and worse, even more shocking down-on-their-luck stories to share seemed to trigger a realization that maybe he didn’t have to be the culmination of his embarrassing past deeds, and that change — real change — was possible through a very unexpected path of barbells, sweat and sobriety.

“When I told someone that I got a DUI,” he remembers sheepishly, “they said, ‘only one?’” It was the first time after the shame of his arrest that Klaverkemp could open up about what really happened, how he got to this painful place, and how he could move on past the punitive criminal justice system that was making him feel even worse about himself.

All he needed to join Phoenix was 48 hours of sobriety.

A 'misspent youth' on South Street

When Scott Strode first launched his sports program for addicts in the Mile High City eight years ago, he had already been in Klaverkamp’s shoes and then some. Strobe, now 43, started drinking at age 10 and using cocaine by 15. He’s been sober for 19 years.

“My misspent youth was in Philly,” says Strode, a native of Lancaster, “with a mohawk on South Street.”

He’s since become a leading advocate for sobriety through fitness, with a powerful Ted Talk (viewed by thousands) to prove it. In it, he recounts his own terrifying struggle with drugs and alcohol, finding himself on the bathroom floor, still high from a 24-hour cocaine binge, feeling as if his heart was beating outside of his chest when he suddenly had an image, a premonition, really, of his mother getting a phone call that her son had fatally overdosed.

Today, Strode looks like someone who stepped out of a wrestling ring, a walking billboard for the power of fitness. He doesn’t pretend that getting clean is easy. And like most former addicts, he says sobriety often means losing friends and pushing forward when using might seem a hell of a lot easier. But when he, as a struggling twenty-something just coming out of the haze of addiction, was introduced to ice climbing — a hardcore sport wherein one picks one’s way up a frozen mountain — he knew he was onto something.

Strode’s newest beta program within the Phoenix Multisport franchise is called Human Strength, and it’s available at Fearless Athletics, a gym in South Philly that specializes in CrossFit. 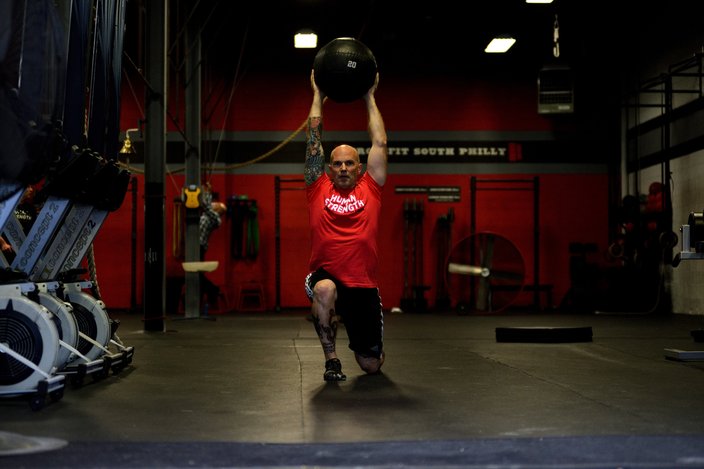 Will Vicinus is the owner of Fearless Athletics.

“I always wanted to bring the program home to Philly,” says Strode. “There is almost no free long-term recovery support.” But he says there is an emergent need for it, especially as some of the more popular acute care formulas fail many addicts. “They’re trying to keep people from dying,” he says, “as opposed to helping them live.”

This past Saturday, during a showcase of the new program, trainers hit the mats to demonstrate some of the CrossFit techniques being used to help addicts stay on the sober path. In a nutshell, it consists of constantly varied, high-intensity workouts that are designed and scaled for any ability level, even newbies.

“It’s supportive and welcoming,” says Strode, who has opened gyms in four states and six cities serving almost 20,000 people to date. The newest test program here in South Philly will ideally help launch a full-fledged Phoenix Multisport in the region, a free gym staffed with former addicts for recovering addicts.

'I was this little gay kid from suburban Connecticut'

“It was a stroke of luck,” says Fearless Founder Wil Vicinus, who first met Strode when was working out at the gym a few years ago. The two struck up a conversation after Vicinus’s interest was peaked by Strode’s no-nonsense “sober” T-shirt.

“It’s part of my own story,” says Vicinus, who’s also in recovery. “All of this has helped me stay sober,” thanks to positive reinforcement and self-esteem building. “It was important for me to give back,” he says.

The concept sounded almost too simple. Vicinus would open his gym up for free to former addicts every Saturday at 3 p.m. and guide them through customized workouts depending on their experience and physical capabilities. It would be a safe space for folks, many of whom may be walking a very thin line between rehabilitation and relapse. The goal is to bolster both physical and emotional strength in a judgment-free zone.

If it sounds even the least hippie-dippy, it’s not.

“There something special about exercise that helps heal self-esteem,” explains Strode, who says there’s a scientific correlation between stimulating parts of the brain that may have been affected by drugs and alcohol with exercise. 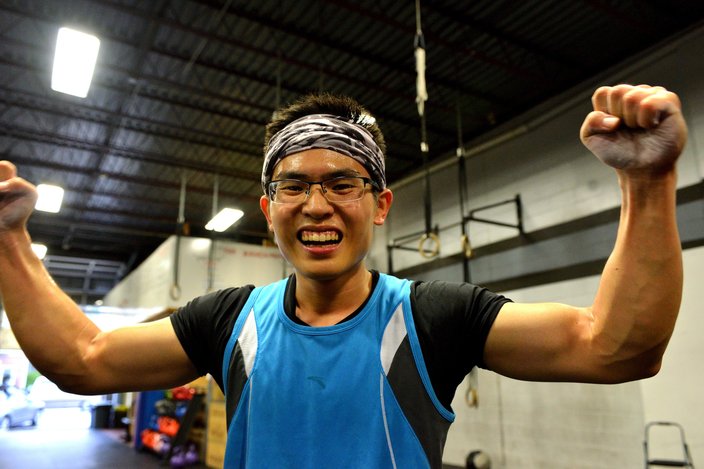 Since it launched quietly last month, the Human Strength program in Philly has averaged about a dozen people each weekend. “We plan our workout based on the number of people who show up with varying ability levels,” says Vicinus. Like all Phoenix programs, the only qualifier is being 48-hours sober.


Vicinus says that, like Strode, working out helped him through his addictions. “The longer I stayed clean,” he says, “the more I found out that it was doing a lot of others things for me, as well. It was building my confidence. Besides having a history of drug abuse, I was this little gay kid from suburban Connecticut. I didn’t think I could be good at sports.”

A lot of the addicts who first arrive at the 11th Street gym also don’t think they can power through a workout, let alone sobriety, only to surprise themselves. Most have never even set foot in a gym before, but there seems to be a shared struggle between the reps, the grunts and water breaks that rallies them on.

Strode next wants to open a full-fledged Phoenix Multisport in Philly for $50K, the cost of incarcerating someone for just one year, he says. Strode’s enthusiasm turns solemn when he talks about the direness of the situation, that we lose someone to addiction every four minutes in this country, roughly the time it takes to order a Starbucks.

With any luck, Phoenix, named for the mythical bird that rises from the ashes, will become an alternative, or even a supplement to the usual AA meetings in dark church basements around the city.

Melody Schofield, a new volunteer coach at Fearless, says she, too, found fitness to battle her addictions the way another might find Jesus. After getting sober, she even competed as an American Ninja Warrior before she started working out regularly in South Philly. She uses social media to inspire others, often hash-tagging “sober life” along with training pics and tips. 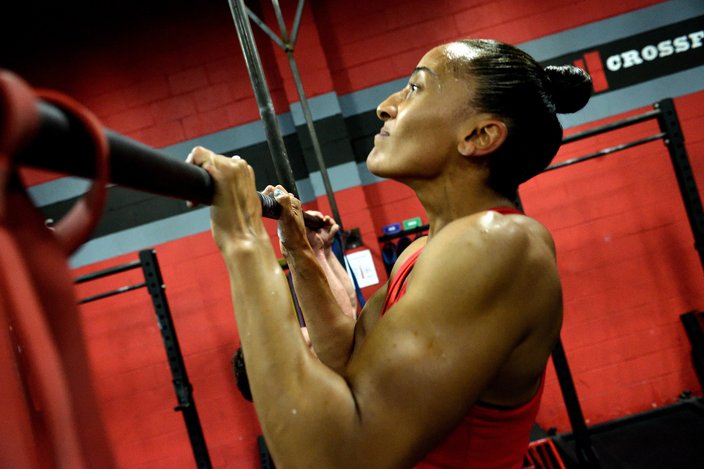 Instructor Melody Schofield works out during a session of Phoenix Multisports at Fearless Athletics, in South Philadelphia, on October 8, 2016.

“It’s a huge part of my life,” says Schofield, who works as an addiction counselor at a rehab center. “The sense of community,” she says, “doing other things to take a step away from traditional groups and meetings, it makes a difference. It’s about doing something active.”


For Klaverkamp, who admits he relapsed when he quit Phoenix after moving to Philly, the program couldn’t have started soon enough. The Media resident has even gotten back in the game to compete in the Super Heroes Race for the Cure Fun Day, a 5K run benefiting the Susan G. Komen 3-Day and Philly’s K-9 units.

“Trauma is the number one public health crisis in the country,” says Strode. He says substance abuse kills more people than car accidents, mass shootings and terrorism combined. He’d like to change the stats because, he adds, “No one ever dreams they’re going to grow up and be an addict.”