Eight casinos will open in the Northeast within three years, creating stiff competition 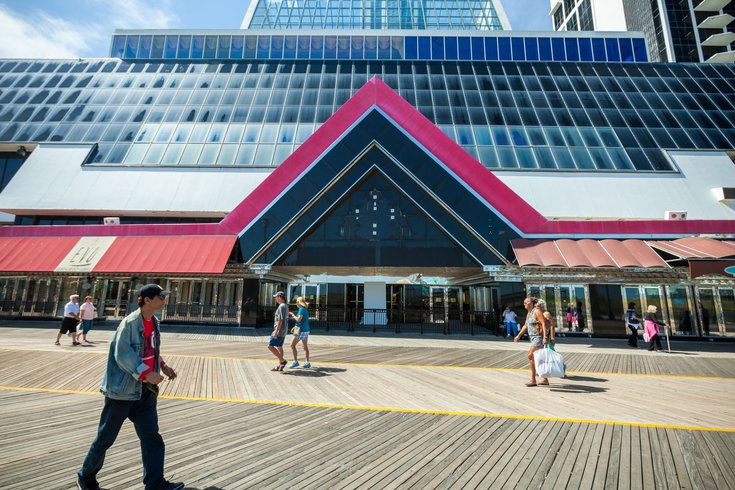 Site of the now-closed Trump Plaza on Atlantic City's boardwalk.

When four casinos shut down in Atlantic City last year, the remaining eight could take heart in the fact that at least they were dealing with a little less competition. Unfortunately, that situation won't last for long.

Developers across the Northeast are spending $5 billion to build eight new casinos within the next three years – and the Philly region, in particular, is going to feel the pain. Moody's released a report Monday that warns investors to expect more casino closures in Atlantic City and more pressure on revenue for SugarHouse Casino in Philadelphia, which will have a new competitor just four miles away by 2019.

"In general, the addition of more casinos in a market will result in some additional revenue for the city that casino's located in, but a big part of it comes from cannibalizing existing casinos," said analyst Pete Trombetta, the report's lead author.

The new casinos represent a 30 percent increase in competition for the region, and Atlantic City may get hit particularly hard. "No good news for Atlantic City" was the blunt title of the section of the report devoted to the Shore town.

Total gaming revenues in AC have declined from $3.5 billion in 2010 to $2.6 billion in 2015. The closure of four casinos last year led to a combined five percent revenue increase for the remaining eight, but the market is expected to keep shrinking.

"Gaming revenue is still declining on a year-over-year basis, but some of the casinos that are open are benefitting from it and they're seeing their revenue increase," said Trombetta.

The casinos most in danger are Caesar's, Bally's, and the Trump Taj Mahal, all of which are in Chapter 11 bankruptcy. The Taj Mahal's revenue was down 18.2 percent in fiscal year 2015. However, the Trump Marina was doing nicely, with a 29 percent increase in revenue.

In a market that's "already oversaturated," Moody's writes, three casinos are opening in New York, three in Massachusetts, one in Philadelphia and one in Maryland. States hoping to fill in budget holes are looking to gaming as a source of additional revenue.

Trombetta says that casinos can prepare for the competition by either cutting costs and paying down debt, "putting themselves in a financial position where they can absorb the hit," or they can expand their offerings.

"If the offerings are the same, people tend to go where it's most convenient," he said.

He cited the Twin River Casino in Rhode Island as a business that "aggressively paid down debt" to prepare for more casinos in neighboring Massachusetts, and SugarHouse as an example of a business that's trying to make itself more appealing to clients.

"They’re investing money in an expansion to the casino floor, they’re bringing in additional restaurants, they’re building a parking garage....They’re hoping to hold on to as many customers as they can,” said Trombetta.

The first new casino, arriving this fall, will be the MGM National Harbor, 10 miles south of Washington, D.C. The last will be the Live! Hotel and Casino in Philadelphia, four miles from SugarHouse and less than 15 miles from Harrah's in Chester.

Costing $400 to $500 million to build, Live! is expected to open around 2018 or 2019 and feature 2,000 slots and 125 gaming tables. However, it's taken some time to find a management team and go through the approval process. Civil rights activists have accused one the casino's developers, Cordish Companies, of discriminating against black patrons at its properties in Kentucky and Missouri. The company denies these allegations, but the casino agreed to create a Diversity Advisory Board and set hiring goals for women and minorities.

Gaming revenue in the Philadelphia market has been mostly flat, hovering around $100 million since April 2013. The report singled out Sugarhouse and Harrah's as being "more vulnerable," and said that Harrah's "has consistently underperformed its competitors in the market over the past two years." Valley Forge Casino and Bensalem's Parx Casino, being farther away from Live! will be somewhat more shielded from the competition.

There is one industry that's happy about the new casinos: manufacturers of gaming equipment. The new casinos are expected to order 20,000 slot machines, and the companies expected to benefit most are Aristocrat Leisure of Australia, International Gaming Technology in the U.K. and Scientific Games Corporation in Nevada. In Pennsylvania alone, 12 casinos have added over 26,000 slot machines since 2007.