A former Facebook employee accused the social media giant of suppressing news stories from conservative websites on its trending lists, according to a Gizmodo report.

The ex-worker spoke anonymously that Facebook routinely tweaked the list to include specific topics and not topics that were trending naturally.

"Several former Facebook “news curators,” as they were known internally, also told Gizmodo that they were instructed to artificially “inject” selected stories into the trending news module, even if they weren’t popular enough to warrant inclusion — or in some cases weren’t trending at all. The former curators, all of whom worked as contractors, also said they were directed not to include news about Facebook itself in the trending module.

Stories covered by conservative outlets (like Breitbart, Washington Examiner, and Newsmax) that were trending enough to be picked up by Facebook’s algorithm were excluded unless mainstream sites like the New York Times, the BBC, and CNN covered the same stories."

According to Facebook, the list displays "topics and hashtags that have recently spiked in popularity" based on engagement, timeliness, users' likes and location. The feature can't be disabled, but Facebook claims users can customize the list. 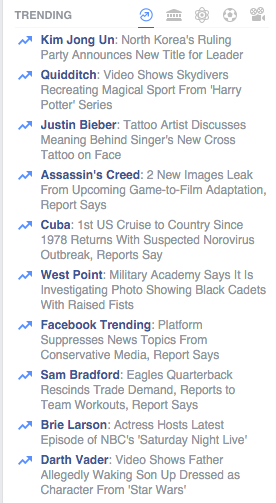 Around 2:45 p.m. on Monday in the Philadelphia area, the "Facebook Trending" was listed right above Eagles quarterback Sam Bradford's return to team workouts. No word on Bradford's desire to compete for his place on that depth chart.

The former employees who spoke to Gizmodo worked for Facebook from mid-2014 to the end of 2015.

“We take allegations of bias very seriously. Facebook is a platform for people and perspectives from across the political spectrum. Trending Topics shows you the popular topics and hashtags that are being talked about on Facebook. There are rigorous guidelines in place for the review team to ensure consistency and neutrality. These guidelines do not permit the suppression of political perspectives. Nor do they permit the prioritization of one viewpoint over another or one news outlet over another. These guidelines do not prohibit any news outlet from appearing in Trending Topics.”