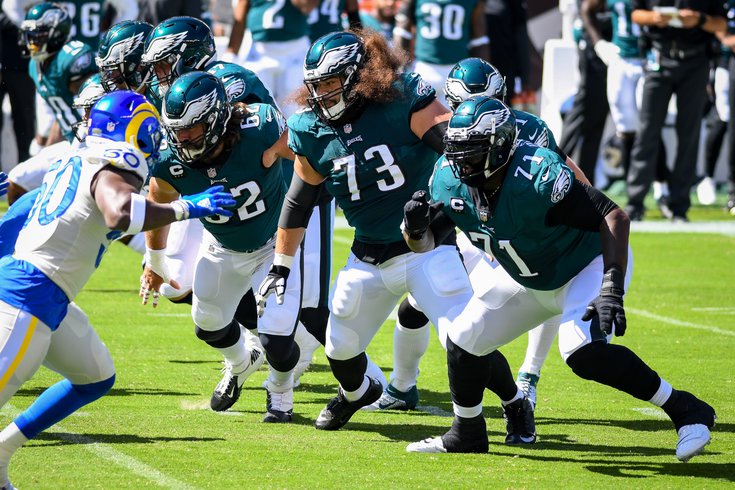 Isaac Seumalo during the Philadelphia Eagles game against the LA Rams at Lincoln Financial Field in Philadelphia on September 20, 2020.

According to Ian Rapoport of NFL Network, Philadelphia Eagles starting LT Jason Peters will be heading to injured reserve with a toe injury. PhillyVoice was able to confirm the report.

Sources: #Eagles LT Jason Peters is being placed on Injured Reserve after an MRI revealed a toe injury that will take several weeks to heal. Another major blow to the Philly O-line.

The loss of Peters is yet another blow to an Eagles' offensive line that has been wrecked by injuries. The Eagles are already without Andre Dillard, Isaac Seumalo, and Brandon Brooks. Peters' most logical replacement is Jordan Mailata, who has played in a pair of games in the regular offesnes this season against the Washington Football Team and the Cincinnati Bengals.

The Eagles have had a different starting O-line combination every week since the start of the season. Here are the Eagles' offensive line versions (some perceived), since May.

Peters has been in decline for some time now, but he remained an above average starter, at least when available, up until last season. This season, his play has taken a drastic downturn, as we showed on Monday.