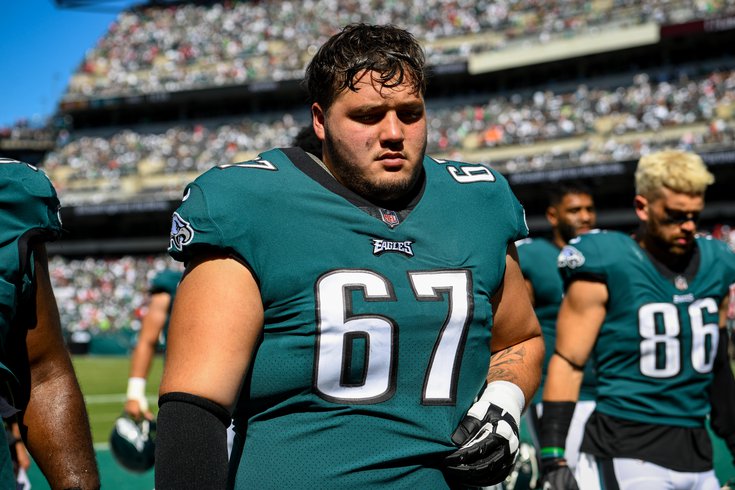 The Philadelphia Eagles will offer a "low tender" to interior offensive lineman Nate Herbig, according to a report from Adam Schefter. They will not offer a restricted free agent tender to LB Alex Singleton.

If another team were to sign a tendered restricted free agent to an offer sheet, the Eagles would have a chance to match that offer, or allow him to sign with the other team, gaining a draft pick in the corresponding round with which they tendered him. However, the higher the draft round a team tenders a player, the higher the cost his 2022 contract will be if he doesn't get any offers elsewhere.

The Eagles will tender Herbig at the "low tender" level. If another team offers Herbig a contract, the Eagles will have the option to match it. If they choose not to match and Herbig leaves for a new team, the Eagles will not be compensated with a draft pick. If Herbig does not attract offers from other teams and signs his tender with the Eagles, he will cost $2,433,000 in 2022.

For a guy who has been a third stringer in each of the last two seasons, Herbig has played a lot of snaps. In fact, in 2020 and 2021 combined, Herbig played 1,493 snaps, third-most among Eagles offensive linemen.

The Eagles have tried to bring Herbig along as a backup center, but he is much more comfortable at guard, and has been able to play both sides competently for the Eagles. At just 23 years of age, Herbig will be younger than a small handful of rookie draft picks this year.

According to a previous report from Schefter, the Eagles won't tender Singleton. He will become an unrestricted free agent free to sign with any team.

This may come as a surprise to some, but Singleton finished 13th in the NFL with 137 tackles in 2021. He also missed 20 tackles, according to pro-football-reference.com, and he struggled in coverage. Still, he has at least been a reasonably competent backup linebacker and special teams contributor, and the guess here is that the Eagles will try to bring him back at a lower cost than $2.4 million.

Boston Scott and Greg Ward are the two remaining Eagles restricted free agents. The Eagles are unlikely to tender either or them.

• Boston Scott: Scott has had his moments with the Eagles as a runner and receiver, and he seemed poised to have a role in the Eagles' offense from the start of the 2021 season, but interestingly he didn't get a carry until Miles Sanders left with his ankle injury against the Raiders Week 7. Scott finished with 87 carries for 373 yards (4.3 YPC) and 7 TDs. He also had 13 catches for 83 yards. Scott was effective in four-game stretch during which Sanders was on injured reserve. With both Sanders and Jordan Howard out against the Giants Week 12, Scott got his best opportunity of the season to produce, but with a six-point deficit near the end of regulation, he lost a fumble that may have cost him playing time down the stretch.

• Greg Ward: In three seasons with the Eagles, Ward had 88 catches for 768 yards and 10 TDs. In 2021, he had just 7 catches for 95 yards and 3 TDs. Ward is a good story and a true professional, and I'm sure the coaching staff likes him, but the Eagles could use more dynamic receivers.