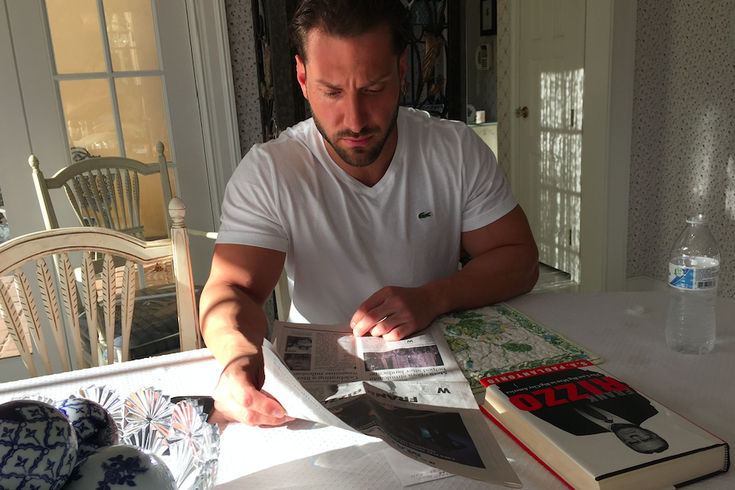 Joe Mastronardo, grandson of late Philadelphia Mayor Frank Rizzo, has concerns about how Rizzo's legacy will be perceived in modern times.

“Frank Rizzo was and is my grandfather,” it read. “We have kept quiet in the past, but if this turns out to be revisionist liberal propaganda, we will keep quiet no longer. Liberal agenda will no longer be tolerated.”

It was sent by Joe Mastronardo on behalf of his father Joseph Vito and his mother Joanna, daughter of the larger-than-life figure on whose life the play is based.

The play formally premiered at Christ Church Neighborhood House in Old City on Wednesday night. On Thursday morning, the e-mailer and his mother welcomed PhillyVoice into their palatial Jenkintown mansion.

Mastronardo’s father couldn’t be there. He’s currently serving time in federal prison on charges connected to a "gambling empire." His guilty plea led investigators to drop charges against his wife but not his son, who is currently under house arrest.

It was in that context that the Rizzo family talked about the highly anticipated play. Joanna will attend Friday night’s performance. (We'll check back in for her review over the weekend.)

"If this is a smear job, I'm not going to take this. If this play is good, if it's fair, that's fine, that's great, I'll say so. But if there's anything I disagree with, if there's anything I know not to be true, I'll let that be known." – Joe Mastronardo, grandson of late Philadelphia Mayor Frank Rizzo

Having faced a lifetime of what the family deemed anti-Rizzo coverage, Joanna mentioned that her concerns were soothed on this day, having talked to her brother, Frannie, who’d just seen it on opening night.

"Now that I know it's decent, I'll be fine with it," said Joanna, who noted that she liked the book by Sal Paolantonio on which the play is based.

To Joanna, Frannie saying it wasn’t as worrisome as the email indicated was a great relief, even if she learned that there's a line in the play about Rizzo "getting soft on crime because his daughter married a bookie."

“I thought it was really good, but I guess I can’t really be objective when I know the real stories,” said Frannie Rizzo, who noted that African Americans who worked on his dad's security team were also in attendance. “To a person who wasn’t his son, daughter, wife, loved one, it would appear to be realistic.

On Thursday, he spoke about the lingering perceptions of Rizzo in an era where people are afraid to speak their minds or distance themselves from a crowd that often feels "factory-made."

The government and the media "have always tried to paint my family in a bad light. It started with my grandfather, and my dad took a lot of heat because of that. It’s blatantly obvious,” he said. “It’s gone on for years and years and years. It’s a jealousy thing is what it is.”

He cited a recent Daily News article as what riled him up most since it quoted a lot of people, but not blood relatives, and this quote from playwright Bruce Graham:

"I know this is going to be the most divisive thing I've ever written. People who loved Rizzo will say I made him a monster. People who hated him will say I was too soft on him. I'm screwed either way."

Responded Mastronardo, "I know this guy wasn't a racist," but that the "liberal agenda is to make everything about race."

"It just seems convenient that the timing, when everything is going down with the racial topics and everything. There are so many things you can write about besides that," he said. "If this is a smear job, I'm not going to take this. I'm just not. I've been through too much with my family, too many things that I don't agree with, I'm not just gonna sit around and be quiet.

"People who do these things have just gotten used to my family keeping their mouths shut, 'write whatever you want and it's cool.' I'm at the point where I can't do that anymore. Now, if this play is good, if it's fair, that's fine, that's great, I'll say so. But if there's anything I disagree with, if there's anything I know not to be true, I'll let that be known."

Mastronardo recalls driving around the city with his grandfather as times that gave him an insight which outsiders can't draw upon when discussing who Rizzo really was. Rizzo would be an outlier "in this politically correct era we're in now," he said.

"Everybody wants to live in fear now. That's the complete opposite of how I was brought up," he continued. "That's why there are so few great people, but a bunch of mediocre people. Society teaches you to fall in line. Nobody has balls to stand out. My father has balls. My grandfather had balls. You never see anything like those two guys ever."

All in all, though, Frannie Rizzo son thinks the performance's existence is a net benefit from a legacy perspective.

"The play keeps his name alive, and I’m happy about that," he said. "I walked out saying, ‘Congrats. You did a good job.' It’s tough to go back so many years and reconstruct Frank Rizzo.”

Mastronardo said, "It'll make me feel much better," if his mother returns home with a positive review, but he will withhold final judgment until he sees it for himself. That could be problematic, though.

His house-arrest restrictions bar him from heading to Old City to see the play, but he's hoping that someone can provide a DVD or other version of the performance so he can watch it from afar.