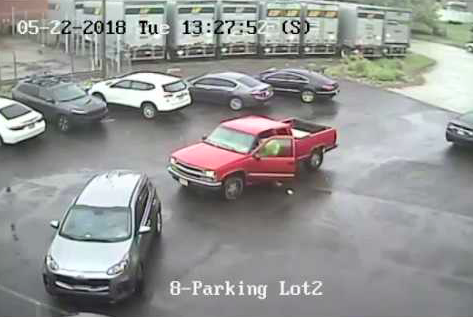 Apparent road rage incident caught on security camera in the Port Richmond section of Philadelphia on May 22, 2018.

An incredible sledgehammer attack was captured on video Tuesday afternoon in the Port Richmond section of Philadelphia.

Video of the incident, recorded by a private surveillance camera, was uploaded to the Philadelphia subreddit on Tuesday afternoon under the title, "Road rage in Cul-de-sac."

The video shows a silver Kia roll into a dead-end lot, followed by a red pick-up truck, which pulls up right behind. The apparently angry truck driver emerges with a sledgehammer in hand and proceeds to bash in the driver's side windows of the vehicle.

As the Kia whirls around to escape, a man is seen tumbling out of the front passenger side door. The Kia driver heads for the exit, but stalls as his passenger attempts to return to the car.

At that point, the driver of the pick-up truck approaches the already-limping passenger on foot and appears to strike him in the arm with the sledgehammer. The victim manages to scramble back to the Kia, which then makes a hasty exit.

It's unclear whether the attack was purely motivated by road rage or whether some other factor may have been at play.

The man who posted the original video — later removed from YouTube — asked PhillyVoice to withhold the name of his business and the street address of the incident. He confirmed that the footage was sent to Philadelphia police on Tuesday, but authorities said that they will only be able to press charges if the victims come forward to them with information.

At a Wednesday press conference, police said they are searching for all of the individuals involved in the incident. They disclosed that the attack occurred in the 2700 block of Luzerne Street.

Anyone with information about this crime is asked to contact the East Detective Division at 215-686-3243.