Art Haywood's bill would force buyers to apply for a license, and get fingerprint background checks, through local police 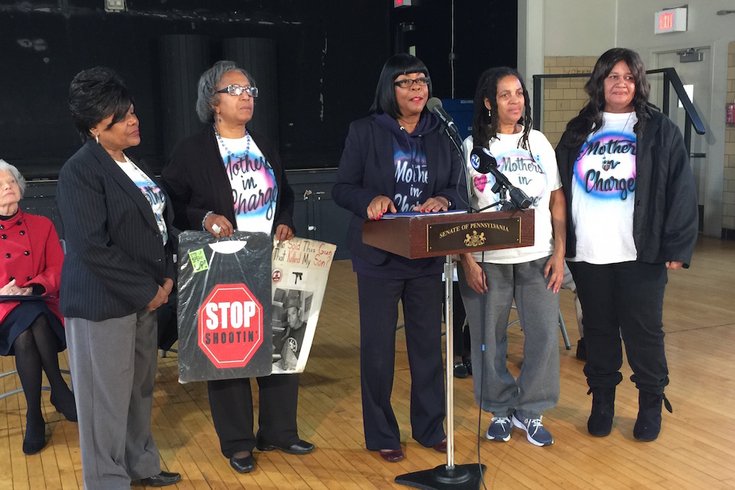 Dorothy Johnson-Speight and other members of Mothers in Charge show support for a bill introduced in the Pennsylvania state senate regarding handgun-purchase legislation.

Flanked by antiviolence activists on the third anniversary of the Sandy Hook Elementary School slaughter, state Sen. Art Haywood (D-4th) rallied for public support of handgun-licensing legislation he introduced in Harrisburg this fall.

If passed, Senate Bill 1029 would require legal gun purchasers to apply for a license  and submit to fingerprint-based background checks – with law-enforcement agencies and undergo gun-safety training.

Those steps, he said, have proven to be disincentives to potential straw purchasers in the 13 states where similar laws are in place.

Haywood referenced a recent PhillyVoice column about the gun-control war in describing the impetus for an effort that focuses on rallying members of the public to contact their legislators with vocal support.

“On the third anniversary of Sandy Hook, I think about what’s been done in the Pennsylvania state senate and legislature: It’s nothing,” he said at the Lonnie Young Recreation Center in Philadelphia’s Germantown neighborhood. “We’d done nothing to respond to killings of innocent children and adults in schools, offices, movies, just walking down the streets.

"What we’re trying to do here is trying to keep guns out of the hands of dangerous people.” 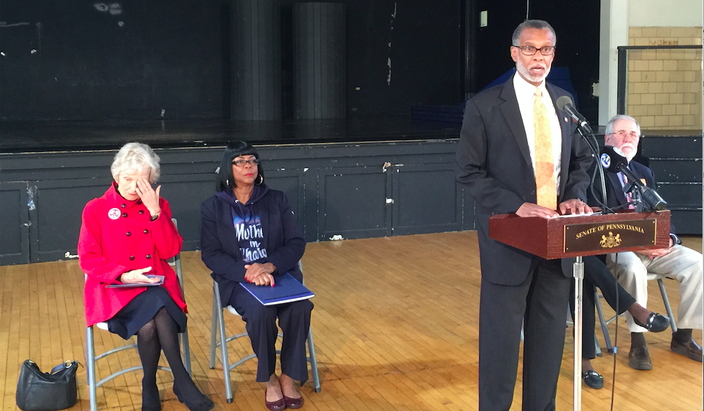 State Sen. Art Haywood calls for the public to support a bill he introduced that would require handgun registration in Pennsylvania. (Brian Hickey/PhillyVoice)

The East Germantown rec center, where the press conference was held, has been the site of many shootings, involving both adults and children, including an eight-year-old boy who accidentally – but not fatally – shot himself with a gun he found outside the Chelten Avenue facility in August.

Haywood likened the gun-control effort to a long-distance race and steps like introducing this bill trade immediate gratification for a sustained push toward change.

Increasing levels of support from groups like Moms Demand Action – with a state membership now outnumbering the NRA’s, he said – give him confidence that success isn’t an impossibility.

Joining Haywood at the press conference were Bryan Miller of Heeding God’s Call, Dorothy Johnson-Speight of Mothers in Charge, Shelly Yanoff of Public Citizens for Children and Youth, and Movita Johnson-Harrell, whose 18-year-old son Charles was fatally shot in a case of mistaken identity in 2011.

Each offered support for the bill.

Miller laid out what a typical straw purchase looks like, while noting that New Jersey has had a similar law on the books since 1966, and drew a connection to its low per-capita gun-death rate that’s half of Pennsylvania’s.

“It can work, and it will work, in Pennsylvania,” he said.

Johnson-Speight urged those “who haven’t lost someone personally” to gun violence to throw support behind the effort. Yanoff noted that “each little step is a mile given where we have to go and what we’ve been through.”

Johnson-Harrell then described the last time she saw her son alive. It was hours before she went to Albert Einstein Medical Center to positively identify his body “on a slab in a white body bag zipped down to the neck.”

“If this bill was in place then, my son would still be alive,” she said, referring to the fact that two people arrested in connection with the case would have been legally barred from owning handguns. “This needs to stop. It has to stop.”

Fielding questions after the event, Haywood supposed that any opposition to the measure would come from people who consider registration “an effort to confiscate guns,” but law-abiding gun owners should support it.

“All it takes for evil to win is for good people to do nothing,” said Yanoff. “We have an obligation. The senator was fulfilled his part; now, it’s up to us.”

Haywood’s was not the only gun-related event in the Delaware Valley on Monday.

“This is about keeping deadly weapons out of the hands of those who are intent on harming innocent Americans. This is an urgent national security matter,” Norcross said.