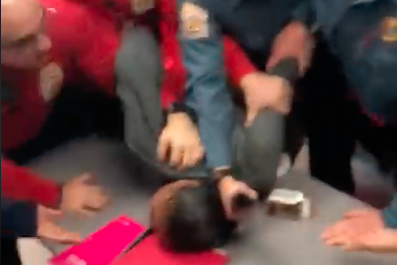 In a video posted to social media, a white school police officer is seen punching and pulling the hair of a 15-year-old black female student who was allegedly involved in a fight at Hazleton Area High School.

The Hazleton School District police chief is defending the force used by another officer captured in a now-viral video, shown repeatedly punching a 15-year-old female African-American student in a school cafeteria.

The footage, which was uploaded to Facebook Monday, shows two female students held down by officers following an altercation at Hazleton Area High School in Luzerne County. One student is seen being pulled away by two officers, while another student is seen repeatedly punched in the legs by another officer. The officer then pushes the student face-first onto a cafeteria table and pulls her hair.

Despite reactions on social media calling for the dismissal of the officers, the school district's police chief, Ed Harry, is denying accusations that the officer used excessive force. In an interview with WBUR, Harry said the video posted does not accurately capture the scene, specifically what led to the chaotic scene.

“At that point, the officer had to get that under control immediately," Harry told WBUR.

"You can see from the snippet of video, there were hundreds of kids in the cafeteria and they were cheering her on yelling and cheering her on. They needed to deescalate that."

According to Harry, the officers present reacted properly.

Brian Uplinger, Hazleton Area School District superintendent, told WNEP the incident was actually the result of three separate altercations, and that four students have been suspended.