A sea of suds washing over South Jersey beer scene 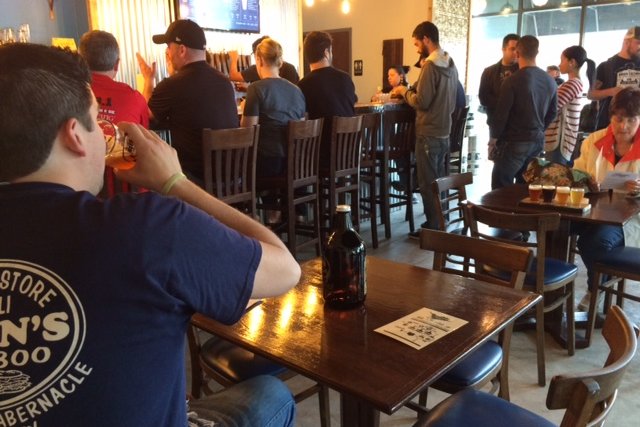 A crowd filled Devil's Creek Brewery in Collingswood, a traditionally dry town known for its restaurants and walkable downtown. Small craft brewers are popping up throughout South Jersey. They are seen as a sign of a vital and healthy business climate in downtowns.

And more suds are on tap.

That’s particularly the case in the suburbs closest to Philly, according to Don Russell, the executive director of the Garden State Craft Brewers Guild.

Camden County’s Devils Creek Brewery formally opened in Collingswood – less than 20 minutes to Center City Philly and right off the PATCO rail line – on Saturday, with a line stretching to the door.

In Gloucester County, Kelly Green Brewing Co. opened about two weeks ago in Pitman, a traditionally dry town, as is Collingswood.

And Oaklyn’s Tonewood, just a town over from Collingswood, opens June 4.

What all of these brand new small brewers have in common, other than the timing of their opening, is they are located in places with small and walkable downtowns.

“Mayors see them as a magnet, an anchor to other businesses,” said Russell of the trend toward downtown breweries.

New Jersey now has nearly 60 breweries producing beer, with about 40 more planned for the near future, added Russell.

“While beer drinkers in South Jersey have already enjoyed great ales and lagers from the likes of Flying Fish and River Horse, they'll be able to take even greater pride in beer that was made just down the street in their own hometowns,” said Russell.

The craft beer boom has even created tourists, who make a point of stopping at several nearby breweries on a trip, added Russell.

"It's another step in how Collingswood's downtown is evolving," said Collingswood Mayor James Maley, who was guarded at first about the town’s legacy as dry, but soon embraced the idea of a brewery in the business district.

The mayor went so far as to pitch in Friday evening by washing windows at Devil’s Creek for their preview night.

"We had a lot of conversation about how this would fit into the fabric of Collingswood and we think it'll be a boon to the downtown as a whole - drawing new traffic, complementing restaurants and being something different in the mix."

And there’s even more beer to flow in South Jersey soon.

Russell says more small breweries are planned by the end of the year: a second brewery in Pitman, and others in Merchantville, Glassboro, and Cherry Hill, which is where Flying Fish, the largest craft brewer in the state, began business.

The suburbs of Philadelphia and New York city are hot locations, he said, because those metro areas have whetted consumer’s palates for better beer. The other hot place for small breweries is the Jersey shore, said Russell, with an eye to tourism trade flowing in from metro areas.

“What's happening is fairly simple: New Jersey is finally starting to catch up to the rapid growth in small brewing that has been happening across the nation for the past 5 to 10 years,” said Russell, who writes a beer column under the name Joe Sixpack.

“New Jersey beer drinkers are as thirsty for good craft beer as everyone else,” said Russell.

But that wasn’t the case until a 2012 change in the NJ law governing breweries. The change allowed brewers to sell beer-by-the-glass, giving them the financial incentive to wade into the local beer market.

That attracted people like Anthony Abate and his wife, Kathy Anser-Abate, the owners of Devil’s Creek, who live in Medford but opened their brewery in Collingswood. She said they stretched financially to get into the business now rather than wait, given the growth going on.

“It took a long time and we had some issues getting some last-minute things done, but all-in-all, it could not have gone better,” she said as she greeted supporters – they raised the last bit of cash with crowd-funding.

She handed supporters rewards, such as gift cards from nearby the Kitchen Consigliere, a Collingswood restaurant that embraced their new brewery business as good for the area.

“For us, it was very personal. I felt like I knew almost everyone,” given the support of the community.

She added that a brewer from as far away as Bristol, Pennsylvania, had reached out and helped and all of the South Jersey brewers had been “beautiful” about their assistance.

Dave Bryan, 28, who moved from Medford to Collingswood last year, was in Devil’s Creek for one beer – a citrusy IPA -- plus a take-home growler of their signature 1888 Old Ale to take home on Saturday.

And now he’s planning to visit the brewers in Medford when next he next visits his mother.

John Maisch of Washington Township, Gloucester County, was contemplating a flight of all four of the Abate’s initial pours Saturday afternoon.

Just the night before, he and his wife, Gail, had visited Kelly Green in Pitman, where they noticed just two doors down another brewery is in the works.

A former home-brewer, Maisch sipped his way through the lineup – this reporter can vouch for the Old Ale – and smiled at his good fortune.

“It’s unbelievable. If you enjoy good beer, this is the time to be alive,” he said.

Eli Facchinei, a Collingswood resident who opens Tonewood – a larger brewery with plans for distribution beyond just its large and beautiful storefront tasting room -- in two weeks, was lured to Oaklyn by the town’s mayor and the cooperative small downtown, where he hopes his business is a catalyst for development.

“We hope this will fill the other storefronts,” he said of the brewery, built and operated by himself, his brother and their father.

Facchinei, who has experience as a professional brewer, has long-range plans to ramp up to canning some of his beer. He hopes to have six brews on tap when he opens.