The Sixers turned a 13-point halftime deficit into a 7-point victory over the Sacramento Kings on Friday night at Wells Fargo Center, 114-107. Here’s what I saw:

The Kings scored 42 points in the second quarter, and if you didn’t know, that isn’t exactly a small amount. Luckily for the Sixers, Brett Brown has been around the NBA long enough to be perfectly aware of how much scoring that is, and it really sounds like he chewed out his troops at halftime.

Here’s what Ish Smith had to say about the scene in the locker room: “Coach was like, ‘That’s not the culture we’re trying to build here.’ He said, ‘Whether you’re playing for me now or later or whatever it is, that’s not how we’re going to do it. While you’re here, we’re going to play it this way.’”

Suffice it to say, Brown’s message got through to his team. Smith and the bench (and later the starting lineup) frolicked against the Kings’ lackadaisical defense in the second half, and that was that. The Sixers held off a late Sactown charge and DeMarcus Cousins’ monster night was all for naught.

1. BOOGIE VS. NERLENS, PART ONE: We’ll get into how Noel defended Cousins later, but he finished with 16 points on 7-13 shooting and 12 rebounds on the offensive end. It was weird, but I thought the Sixers didn’t call Noel’s number enough. Cousins is a plus team defender, but it didn’t seem like he was really trying to guard Noel until the end of the game.

2. Smith lived in the paint for the whole second half. 39-year-old Andre Miller helped the Kings build the lead in the second quarter against the Sixers bench, but The Professor had no prayer of staying in front of the lightning quick guard. Coming off the bench, Smith finished with nine assists to three turnovers. The Kings had no answer for him in the pick-and-roll or transition. He did an excellent job reading the defense and hitting the roll man or kicking out to shooters.

3. The play that effectively sealed the game for the Sixers was an alley-oop from Smith to Noel out of a side pick-and-roll. Brown called that number a lot in the second half. “We tripped on the sideline tonight,” Brown said. “We played a lot out of a sideline pick-and-roll and got into it in different ways. [Smith] did a hell of a job of navigating floor spots, finding rollers for lobs and dunks, and playing that second side of the floor.”

5. Jerami Grant hasn’t been as consistent shooting the ball as he was during the torrid streak he enjoyed in late January, but I liked some of the plays he made off the bounce in this game. He’s an interesting piece to the puzzle.

6. Robert Covington shot 6-12 from behind the arc, and he did most of his damage in the game’s opening minutes. The Kings didn’t do a great job of chasing him around screens, so Bobby Buckets was able to get clean looks out of the Sixers’ basic motion offense.

1. BOOGIE VS. NERLENS, PART DEUX: I can’t imagine there’s a tougher cover for Noel than fellow Kentucky center Cousins (By the way, doesn’t it seem like there’s a high-profile UK player for Noel to play against every week?). For such a skinny guy, Nerlens has done well utilizing his speed to offset physicality as the season has progressed. Well, strength beat speed tonight. Boogie went for 39 and 24, and as crazy as this sounds, it could’ve been a lot worse. Not all of those points were against Noel, but a bunch of them were. Whenever Boogie wanted, he could bull his way to the rim on a drive and Noel would simply bounce off of him.

2. One of the minor things Noel excels at is slipping around the posting big man exactly when the pass is thrown and stealing the ball. He particularly did that well against similarly skinny Pau Gasol the other night. “It’s a harder circumference to get around,” Brown said before the game, referring to Cousins. “That much dancing is a little bit more challenging.” It really did prove to turn out that way. Man, Cousins is such a beast. Here's a general idea of what Noel was looking at the past two games: 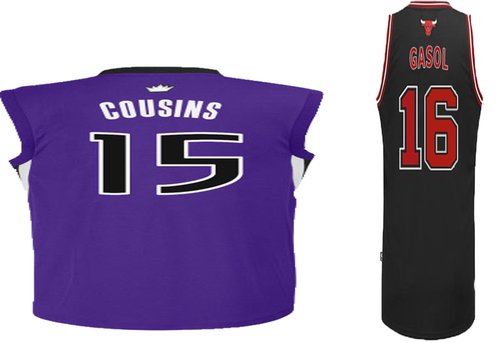 3. I thought the refs let both teams play quite a bit. The physical style of play probably benefitted the Sixers more, because Cousins wouldn’t have missed 12 shots if the officials weren’t generally letting things go.

4. Interestingly enough, Sims was probably the best matchup for Boogie. Even though he’s nowhere near the defender Noel is overall, you need to attempt to match Cousins’ strength or there’s no way to guard him. Sims certainly has Noel beat in the weight room.

There might not have been the K.J. McDaniels off-the-backboard dunk that consistently cracks Top Plays on SportsCenter, but this game had a bunch of highlights. For the most part, it was played in the open floor, and that is exactly the type of game that lends itself to exciting plays. The Kings also had a bunch of highlights that I won’t list here. Rudy Gay posterized Thomas Robinson pretty good in the first half. OVERALL GRADE: B+

1. JaKarr Sampson Hangtime Dunk: You don’t usually get to see it, but Sampson possesses the ability to stay up in the air for a pretty long time. It must be the hair.  Grade: B+

2. Jerami Grant Block on Omri Casspi: Now THAT is a Dalhausser. Grade: B+

3. Ish Smith's Personal And1 Mixtape: As we discussed above, Miller guarding Smith wasn’t going to work out for the Kings. All that this one was missing is someone yelling “Hot Sizzle!” in the background. Grade: B+

4. Jerami Grant Block on DeMarcus Cousins: Another Kings drive, another swat by the rookie. Grant had three other Dalhaussers on the evening, but blocking Boogie takes on extra significance. I even joked on Twitter that Grant might hurt his hand if he keeps this up. Grade: C+

This game, my friends, was what people in the biz refer to as “a track meet.” Per TeamRankings, the Kings surrender the most fastbreak points in the league at 16.2 points per game. The Sixers are fifth worst at 15.0 PPG. Gone are the days of the Doug Collins Prevent Defense that started on offense. As far as the Kings are concerned, they turn the ball over at the fourth-highest rate in the league (the Sixers are the worst in that category) and generally don’t get back on defense quickly as a team. Cousins is very prone to loafing back in transition, for example.

Sacramento destroyed the Sixers’ transition defense in the first half, though. Derrick Williams found success constantly leaking out in transition after jumpers, and the Sixers’ floor balance wasn’t always the best. Liberty Ballers’ Sean O’Connor pointed out that the strategy could be a modified version of owner Vivek Ranadive’s wish to experiment with playing 4-on-5 defense:

Player of the game

Noel answered the bell offensively and Lord Covington’s marksmanship got the Sixers off to a hot start, but I think the POTG belongs to Smith. His pace totally changed the feel of the game when he was inserted in the second half. Post-Trade Deadline Standings: Noel 6, Grant 3, Covington 3, Thompson 3, Smith 3, LRMAM 1, Sampson 1, Richardson 1, Canaan 1, and Robinson 1.

Once George Karl was hired as head coach of the Kings a couple of weeks ago, Sixers assistant coach Vance Walberg was let out of his contract so he could reunite with the man he recently worked under in Denver. Walberg, who was brought onto Brett Brown’s staff prior to the 2013-14 season, is considered somewhat of a coaching guru. Specifically, he’s credited with creating the Dribble-Drive Motion offense. In case you have some time, Walberg is prominently featured in this excellent 2008 Sports Illustrated article about John Calipari from when he was the coach at Memphis.

Walberg was back in town tonight, and before the game you could tell that he and the most of the Sixers coaching staff are still on good terms. The 58-year-old Kings assistant even bear-hugged Robert Covington and Luc Richard Mbah a Moute.

Fresh off a very strong performance against Atlanta last weekend, it was strange to not see Hollis Thompson enter Wednesday’s game until after halftime. That is part of the reason Brett Brown saved Jason Richardson for the second half of the back-to-back tomorrow night against Brooklyn. In the coach’s words, sitting J-Rich “cleans up the wing spot.”

On a team that now goes ten deep, Brown has a pretty difficult juggling act on a nightly basis. Some players (Noel, Covington, Mbah a Moute) have earned consistent minutes, but it’s a numbers crunch beyond them. Even though Thomas Robinson has cleaned the glass at a crazy rate, Brown can’t find extended playing time for him. Henry Sims hasn’t get on the floor at all recently. New acquisition Glenn Robinson III can’t get a sniff. Maybe cutting back Mbah a Moute’s minutes is the answer, but I’m sure Brown is (rightfully) worried the team’s defense will fall apart.

That was a great 12 minute run by Henry Sims there. First time he's played in four games. #Sixers.

Cooney was the first person to point out Sims’ clutch play. He had been DNP-CD’d for three straight games and he was thrown into the action at a critical juncture. Sims responded with eight points (4-5 shooting), four rebounds, and was a +12 overall. The third-year pro is limited in many areas, but he’s a big body that is already a professional at 24 years old. The capability of having nights like tonight at a moment’s notice is why he might be able to stick in the league for longer than we originally might have thought.

“To be able to put him in a game and have him perform the way he did, I think it just speaks volumes about him and I think it’s a really great example for our young guys,” Brown said.

Young guys! At the ancient age of 24 years old, Henry Sims is this team’s version of Nazr Mohammed or Juwan Howard. Sixers basketball, ladies and gents.