This measure allows for significant advances to the rail project, which will extend the Norristown High Speed Line four miles into King of Prussia 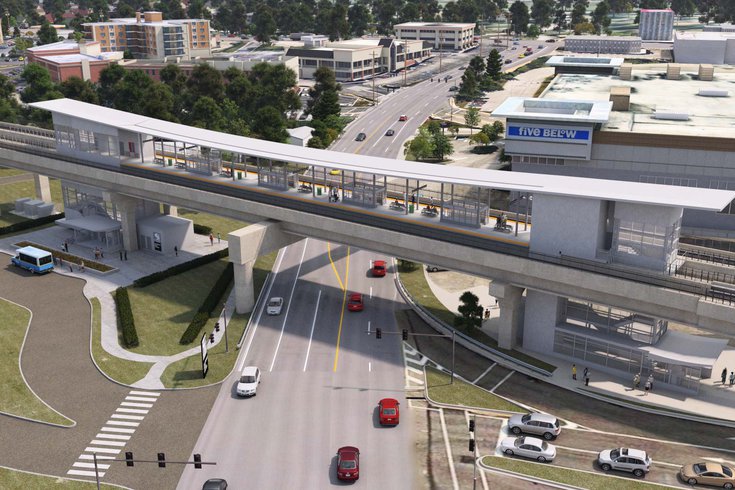 The next step in SEPTA's ongoing King of Prussia Rail project is underway, as the board approved the acquisitions of approximately 70 properties on Thursday. The rail will extend the existing Norristown High Speed Line four miles into King of Prussia. Above, a rendering of the Allendale Road station near the King of Prussia Mall.

SEPTA's King of Prussia Rail project is another step closer to realization thanks to its board of directors' vote on Thursday.

The board approved the acquisitions of approximately 70 properties as part of the project development phase of its King of Prussia Rail. The rail will extend the existing Norristown High Speed Line (NHSL) four miles into King of Prussia.

SEPTA took to social media to share the latest on the project, as well as information on its trolley modernization process.

According to SEPTA, the board voted to begin the real estate process related to the permanent and temporary acquisitions of around 70 properties necessary for the KOP Rail.

"These acquisitions will facilitate the construction, staging, and establishment of the KOP Rail extension," SEPTA wrote on Instagram. "The Board’s decision authorizes SEPTA to begin appraising the properties, determining fair market value, making offers, and reaching an agreement with owners."

The extension will provide high-speed "one seat" rides into King of Prussia from any station along the NHSL, including 69th Street Transportation Center in Upper Darby and Norristown Transportation Center in Norristown. This will offer shoppers, students, commuters and visitors easy, reliable transit between the Delaware Valley's three largest employment centers -- Center City, University City and King of Prussia -- in 45 minutes, which is less than a typical trip on the Schuylkill Expressway.

In approving the acquisitions, SEPTA is authorizing an expense of up to $200 million, the Inquirer reported. Properties acquired include a mixture of residential, commercial and industrial. The overall King of Prussia Rail project has a price tag of about $1.8 billion.

The rail is currently in its project development phase, which involves drafting a financial plan that will consider a variety of funding sources. Right now it is being financed through a federal earmark, and SEPTA will seek up to 50% of the project's funding through the Federal Transit Administration's New Starts Program.

Back in May, SEPTA accepted bids for the final design of the proposed five-stop rail extension. The plans include stops at Henderson Rd, Allendale Rd, Mall Blvd, First & American, and First & Moore/Valley Forge, connecting riders with popular destinations like the King of Prussia Mall and Valley Forge Casino Resort. Artistic renderings of the stations are available online.

SEPTA hopes to have all property acquired by the end of 2024, and for construction to begin as early as 2025.