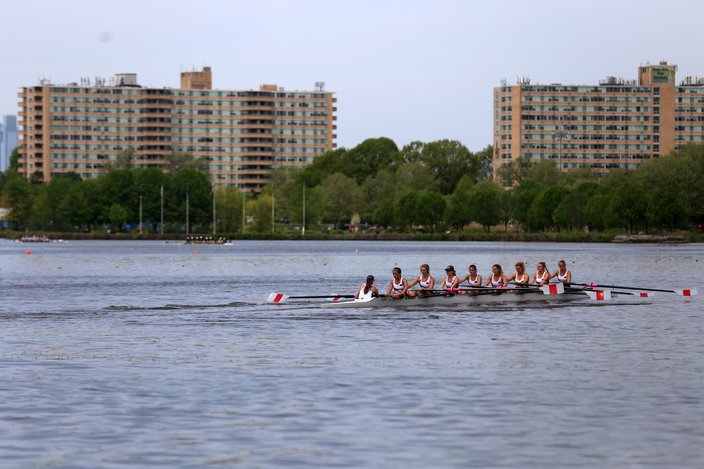 The Dad Vail Regatta will move from the Schuylkill River in Philadelphia to the Cooper River in Pennsauken, New Jersey in 2023, due to dredging at the traditional site. Above, a women's rowing team from St. Joseph's University is pictured on the Cooper River.

When the Dad Vail Regatta rowing competition returns for its 84th year next May, it won't be held at the familiar Schuylkill River National Racecourse in Philadelphia.

Instead, as a result of the ongoing dredging project in the Schuylkill River, the prestigious collegiate race will be staged about five miles away on the Cooper River in Pennsauken Township, New Jersey, organizers said.

"Hosting the Jefferson Dad Vail Regatta is a great honor for us and our internationally recognized racecourse at Cooper River Park," Camden County Commissioner Jeff Nash said. "We are looking forward to hosting the thousands of world class athletes and the more than 30,000 fans who annually participate in the biggest collegiate regatta in the nation. We can't wait to roll out the red carpet for the rowers, staff and fans in 2023."

The regatta is scheduled to take place on Friday, May 12 and Saturday, May 13.

The park along the Cooper River borders Pennsauken, Collingswood, Cherry Hill and Haddon Township. The board of directors for the Dad Vail Regatta voted unanimously to move next year's event primarily due to the scheduled dredging.

Rowing advocates have long pushed for the Schuylkill River to be dredged to clear the waterway of sediment and debris, which have accumulated in the 22 years since efforts were last made to improve portions of the course.

The state of the riverbed has led to concerns that Philadelphia, which has one of the world's premiere rowing and paddling communities, could lose regatta events due to an unfair competitive waterway. The events also bring economic benefits to hotels and local businesses.

In May, the U.S. Army Corps of Engineers announced $13 million in funding for the restoration of the the Schuylkill River waterway. Previous grassroots fundraising efforts had led to the start of dredging in 2020, but the contractor encountered engineering challenges that led to a legal dispute and the termination of the contract.

Dredging of the Schuylkill River resumed this summer with a new contractor, whose work will cover both the waterway in front of Boathouse Row and the National Course further north.

In 2016, Cooper River Park underwent a dredging project of its own that brought a number of improvements and new infrastructure to the waterway, which features a 2,000-meter Olympic course. The venue has attracted a growing number of contests in recent years, but none as big as the Dad Vail Regatta.

The historic event, named after famed University of Wisconsin rowing coach Harry Emerson "Dad" Vail, has been held on the Schuylkill every year since 1953, with the exception of 2020 when the event was canceled due to the COVID-19 pandemic.