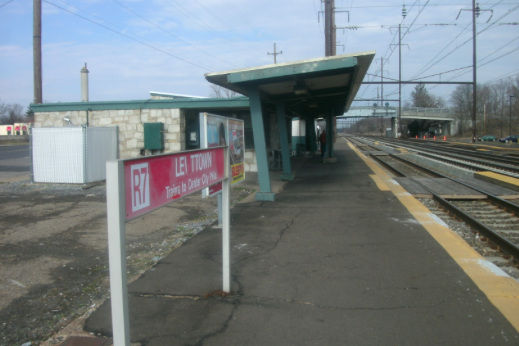 SEPTA plans a $37 million reconstruction of the 1950's-era Levittown Station on the Trenton regional rail line.

Amid an ongoing dispute over taxes, fees and regulatory costs associated with the renovation of Levittown Station in lower Bucks County, SEPTA has filed a federal lawsuit against Tullytown Borough seeking a preliminary injunction to prevent further delays to the $37 million transit project.

The disagreement revolves around whether Tullytown Borough, site of the Levittown Station, has a legal right to impose a building permit fee of $105,000 and other costs against SEPTA, according to Plan Philly. The station, which is owned by Amtrak, was leased to SEPTA for use on its Trenton regional rail line. Because Amtrak is exempted by federal law from state and local taxes, SEPTA contends that a provision of that exemption covering commuter rail operations should spare it from having to pay Tullytown's fees.

SEPTA's reconstruction plans for the 1950s-era Levittown Station include high platforms, pedestrian overpasses, 70 new parking spaces, and ramps that will make the facility compliant with ADA regulations. The transit agency had hoped to begin construction last year and complete the project by 2017, but the alleged interference from Tullytown Borough has prevented the initiative from getting off the ground.

In the lawsuit, filed Wednesday in Philadelphia, SEPTA claims it has already paid Tullytown and its consultants $166,000 to complete inspections and cover related costs. The transit agency says it made these payments even though it was not legally compelled to do so. As Tullytown allegedly wrangled to obtain the $105,000 building permit fee, SEPTA claims the borough threatened to double the fee, fine SEPTA contractors and "shut down" the project.

As a result of the delays, SEPTA says it has lost another $100,000 in inspection and engineering fees.

Tullytown Borough solicitor Mike Sellers has countered that it's not the borough's job to "rubber stamp" projects and that SEPTA is using federal law to prevent it from meeting state-level obligations to review blueprints for safety. SEPTA says Amtrak's ownership protects it from enforcement of Tullytown's local building permit requirements, zoning laws and fees.

Still, SEPTA could be on the hook if its original decision to pay $166,000 is construed as voluntarily "waiving" its right to federal exemption. The issue is whether SEPTA even had a legal right to waive it, intentionally or otherwise.

Tullytown has until March 22 to file a response to the lawsuit, but Sellers has said the borough is open to resolving the disagreement outside of court.