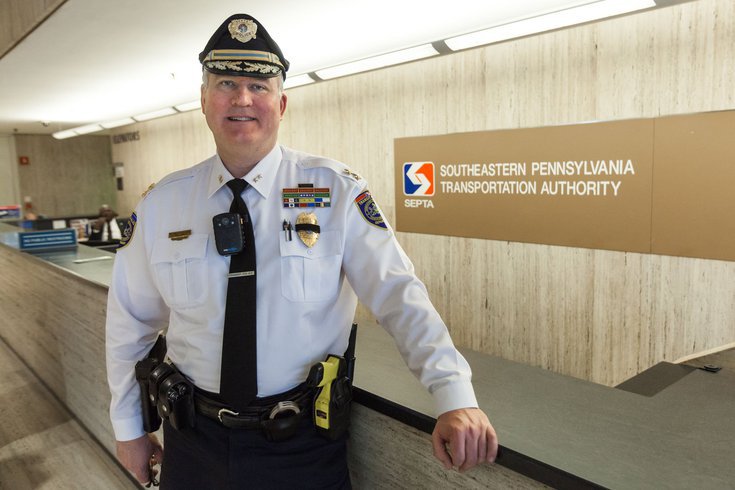 Thomas Nestel III was hired as SEPTA's Transit Police in 2012. He retired Tuesday after a decade leading the department, which has been struggling with officer recruitment amid high levels of crime on the transit system.

Thomas Nestel III, SEPTA's transit police chief for the last decade, retired Tuesday, effective immediately, SEPTA announced. He will be replaced in the interim by his second-in-command.

Police inspector Charles Lawson, who has been with the transit police force for 28 years, will take over for Nestel while SEPTA searches for a permanent replacement.

Nestel's retirement comes as SEPTA continues to struggle with high rates of crime and persistent problems with officer recruitment, areas that became worse during the COVID-19 pandemic.

Robberies and aggravated assaults increased by 80% from 2019 to 2021 despite ridership sagging. In May, ridership was at 53% of the levels it was prior to the pandemic; monthly passenger revenue was 26% below budget.

"The safety and security of customers and employees is SEPTA's top priority, and plans have been put in place to ensure continuity of operations for the Transit Police Department during this transition," SEPTA General Manager Leslie Richards said. "SEPTA will continue to advance new safety and security efforts, including work with health professionals to engage members of the vulnerable population as part of the SCOPE (Safety, Cleaning, Ownership, Partnerships and Engagement) initiative, as well as outreach specialists who are helping reinforce the rules for riding and serving as eyes and ears for transit police. We are also actively recruiting for new police officers to join the SEPTA Transit Police Department."

Nestel had been facing calls for his resignation for more than a year, including from SEPTA's Transport Workers Union Local 234, over an increasingly unsafe transit system that lost significant ridership during the pandemic. Crimes, including robberies, assaults and rapes, especially have plagued SEPTA's Market-Frankford and Broad Street subway lines. Homelessness, drug use and unsanitary condition also have become more commonplace at stations and on trains.

SEPTA's transit police force has been chronically short of the 260 officers that the authority's budget can accommodate. The agency has hovered between 210-220 officers during the last few years.

In April, the president of SEPTA's transit police union shared frustrations about the challenges facing officers.

"The problem is not that people don't want to be police officers," said Omari Bervine, president and CEO of the Fraternal Order of Transit Police Lodge 109. "The harsh reality is that nobody wants to be a SEPTA police officer. SEPTA is among the lowest paying full-time police jobs in the area."

The transit police union could not immediately be reached for comment Tuesday morning.

The union made several requests to meet with Richards during the pandemic, but was unsuccessful, Bervine had said in April. Last March, the police union announced a vote of no confidence in Nestel, citing crime and "deplorable" conditions due to homelessness and drug use on the transit system.

Nestel told NPR this spring that SEPTA transit police are limited in what they can do to deal with homelessness and drug use on the system, particularly as attitudes about policing have changed.

"That eagerness to focus on the quality-of-life issues using the police is no longer as palatable as it was before," Nestel said.

Over the last year, SEPTA has hired unarmed guards and social outreach workers to monitor its facilities and work with vulnerable populations on trains. These efforts have had mixed results, but SEPTA has still struggled to recruit new armed officers. The authority's private security contractors also have not been as effective as hoped in improving the situation during the pandemic.

SEPTA did not provide a timeline for a permanent replacement to be selected as transit police chief.