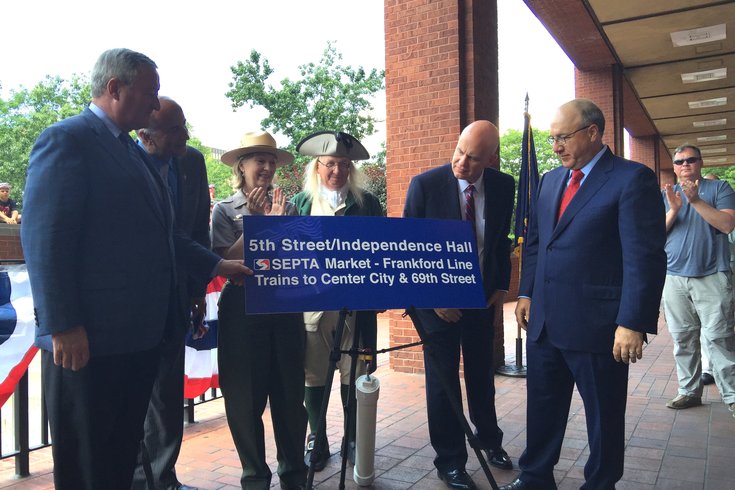 City, SEPTA, federal and historical officials unveiled the new name of the 5th Street Market-Frankford Line station during an event on Thursday, June 30, 2016.

Dow Chemicals. Wells Fargo. Those were among the names that came to mind when SEPTA announced a Thursday afternoon press conference about the name-based rebranding of its Market-Frankford Line 5th Street Station.

To hear SEPTA General Manager Jeffrey D. Knueppel tell it, though, corporate naming-rights deals a la Jefferson and AT&T Stations were never in play during a process that started just a month ago.

Instead, SEPTA and a group of Independence Mall-area stakeholders, who are focused on securing a federal grant to transform the underground location into a “world-class facility,” went with a name that will help visitors and locals alike know where that most historical square mile is just by looking at a transit map.

“There were a lot of people in suspense waiting for today’s announcement,” Knueppel said. “It’s a fitting name for an iconic area.”

As droves of people headed toward, or back from, an aggressively crowded Wawa HoagieFest across the street, Knueppel, Mayor Jim Kenney, City Councilman Mark Squilla and others touted the benefits of the rebrand.

“I live in Old City. Up until January, when the police took over (the daily travel plans for the newly elected mayor), I used it every day,” said Kenney, who posed for selfies with HoagieFest goers during breaks in the action. “Cleaning this station up will help clean others up.”

With that latter comment, he was talking about the application SEPTA submitted for a $7.8 million TIGER grant to help with the $19.5 million proposal to revamp the newly renamed station with critical structural repairs and gussied-up "street-level pedestrian and multi-modal connections."

They've taken to calling it "United By History: A Multimodal Transportation Hub for America's Birthplace."

"We have big plans for the station," said Knueppel, noting that the application has been submitted and remains under review.

“It’s so much more than just a name change,” he said of a stop that featured a conductor’s announcement regarding tourist attractions, but not any formal notation on the map itself. “We instantly knew it was the right thing to do. Independence Hall started it all.”

As for the timing of the announcement – the station already featured updated signage, officials said – the Fourth of July weekend was a fitting hook. With more tourists in town, making it easier to find the attractions was a driving force.

Corporate rebranding is still in play for other stations, just not the one most closely aligned with Philadelphia’s role in the birth of America.

“Yes,” said Knueppel about whether corporate entities have expressed interest in branding another subway or regional-rail stops in their image, “but I can’t talk about that.”