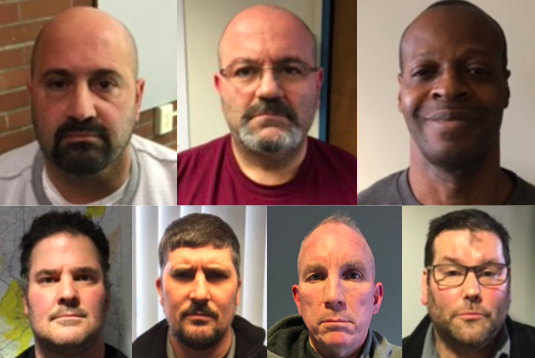 The defendants, all employees at Lackawanna County Prison, allegedly abused their power to create a decade-long culture of sexual abuse and assault at the Scranton prison, according to prosecutors.

Many of the victimized women hesitated to come forward with allegations for fear of reprisal, Shapiro said.

“These women literally had nowhere to turn for help, and they considered this horrendous behavior to be the ‘status quo,'" the attorney general said Thursday.

Disturbing details of the alleged abuse were announced at the end of a year-long probe by a statewide investigating grand jury.

Prosecutors said the guards had a tradition of having female inmates perform a certain sexual act in specific locations of the prison, an activity so commonplace that the inmates had a slang term for it.

The guards also allegedly used a warning system when coercing victims to perform sex acts inside their cells, enlisting other guards to remotely "click" the locks shut whenever someone was approaching the cell.

One victim testified that she was coerced into a prison utility closet to perform various sexual acts on more than 10 occasions.

“In the few instances that these allegations were reported to personnel at the Lackawanna County Prison, there is no evidence that any action was taken to help the female inmates who were being sexually assaulted by correctional officers,” Shapiro said. “This is outrageous conduct by those placed in positions of power.”

All of the defendants were taken into custody Wednesday without incident amid an ongoing investigation.

“I will not allow sexual abuse to take place at any correctional institution in our Commonwealth," Shapiro said. "To the women who have endured this horrendous abuse for many years, we hear you. Today, we’re putting a stop to it."