Football cannons, 'Kidzgoo' and talking stuffed animals among products vying to be featured on ABC show 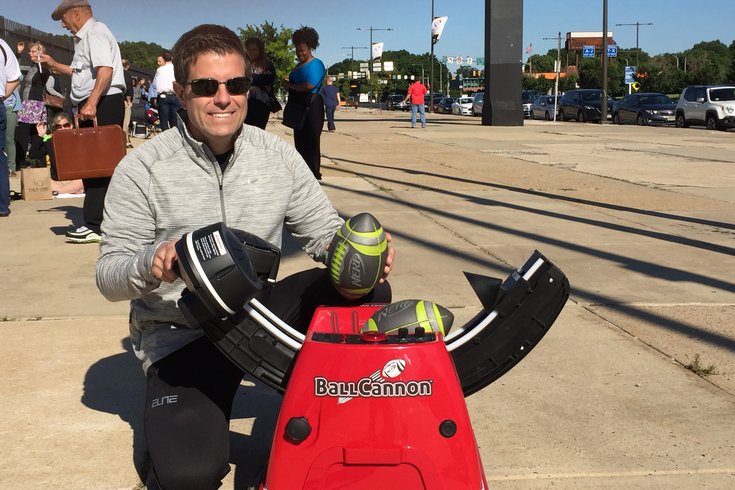 Fred Hafer, of Reading, Berks County, crouches next to 'The BallCannon,' a patented machine that shoots Nerf Football passes. Hafer pitched his product to ABC's 'Shark Tank' during an open casting call at XfinityLive! in South Philly on Friday, June 10.

What motivates someone to try and get on ABC's reality television show "Shark Tank"?

Surely, first, you need to have an idea, one that you believe is worth an investment from the show's panel of celebrities and entrepreneurs. But – and pardon the cliché here – you've also got to believe in yourself .

Appearing before the likes of Mark Cuban and Barbara Corcoran and pitching your business plan to not only them, but to a national audience, is a daunting task. You've got to have some showmanship to accompany your pitch.

Among the 100 or so people patiently waiting in line outside XFINITY Live! in South Philly on Friday morning for the show's open casting call, there was no shortage of personalities, and certainly no shortage of ideas — which ranged from intriguing to fun to bizarre. Here are four of the most interesting pitches from hopeful entrepreneurs looking for a chance to appear before the Sharks: 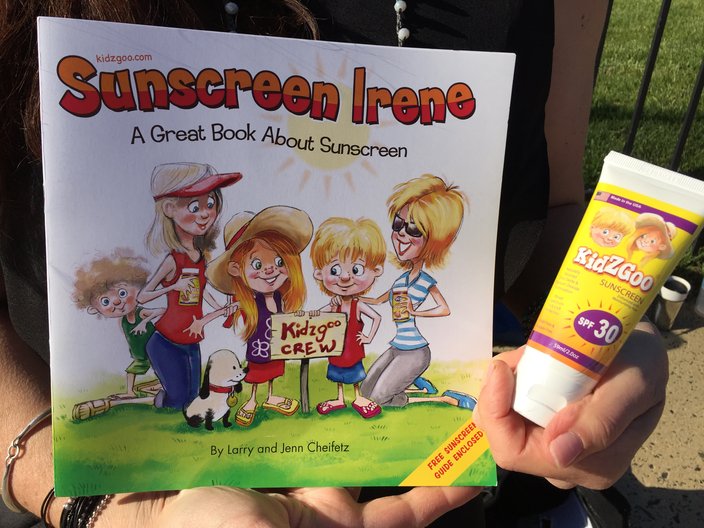 Jenn Cheifetz, of Upper Dublin, holds up a bottle of her

With a name that sounds like it should be dumped onto the head of a teen idol during a Nickelodeon awards show, Kidzgoo rings pretty silly.


"Get your goo on!" co-creator Jenn Cheifetz said, quoting her company's catchphrase meant to get children excited about their product.

Sure, its intended for kids, but its also meant to address a serious health crisis, said Cheifetz, 49 of Upper Dublin.

Cheifetz, along with her husband, Larry, wrote and illustrated a children’s' book about the importance of wearing sunscreen in response to the serious skin cancer problem in America. But after writing their book — "Sunscreen Irene: A Great Book About Sunscreen" — they discovered the products on the market were "terrible," citing concerns about some of the chemicals used in many commercial sunscreens. So they worked with a local formulator to develop a mineral-based sunscreen, and voilà: Kidzgoo.

"It's really about creating a movement for kids," Cheifetz said.

They want to get money from the Sharks to not only keep pushing Kidzgoo, but also other natural products and accompanying books they're creating. For example, the couple's next book "Nighttime With Gracie" is going on the market soon paired with a natural toothpaste. 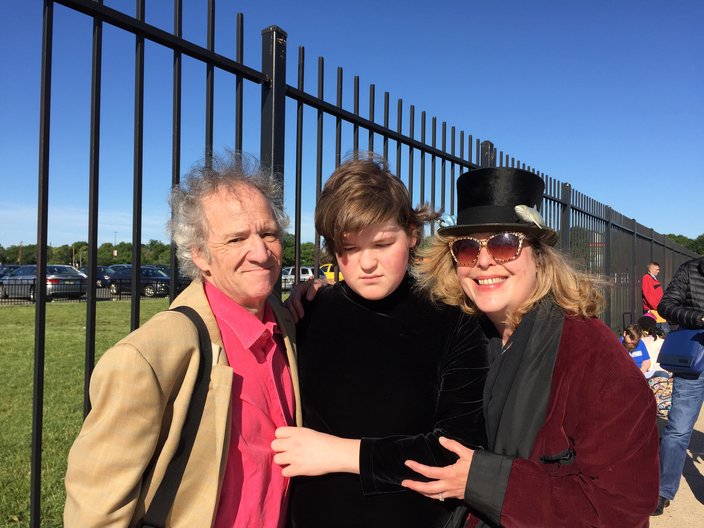 Nancy and Andrew Shapiro's 14-year-year-old son Arthur (who goes by his stage name, Arthur Dodger, seemingly a play on Artful Dodger), stood quietly as his parents sung his praises.


The New York City couple said didn't want to put Arthur on Ritalin when he was diagnosed with ADHD. Instead, she and Andrew allowed Arthur to try and focus his energy on music. The result? "Shoaled Out," Arthur Dodger's debut album recorded at Fame Studios in Muscle Shoals, Alabama.

The front and back covers to 14-year-old Arthur Dodger's debut album,

The album features some surprisingly notable cameos – like the record's bassist Dave Hood, who is in the Alabama Music Hall of Fame, a fact Nancy and Andrew were anxious to point out. They also highlighted Arthur's performance at the legendary Apollo Theater in Harlem during an amateur night.

So, what exactly do some enthusiastic parents want from the Sharks? Exposure, apparently. The links to both websites listed on Arthur's CD are defunct. They're looking for help getting better online exposure and funding Arthur's musical, "Quest for the Lost Chord." They hope Arthur gets the chance to sing his song "Mr. Wonderful" in front of Kevin O'Leary. The song is named for O'Leary's "Shark Tank" nickname, and the lyrics tell the tale a show's entrepreneur contestant who suffers one of the shark's infamous verbal beatdowns after a bad pitch.

The BallCannon (aka, Nerf Football on steroids)

Fred Hafer of Reading, Pennsylvania, claims his invention is the first of its kind: a Nerf Football cannon that can launch one of the spongy pigskins up to 100 feet. With adjustable speeds and angles, all you need are batteries — oh, and $499.

Hafer started selling The BallCannon online in March, and he's already got a patent, a trademark on the name and a license with Hasbro to use Nerf Footballs. He has sold 50 units, so far, he said, and now he's looking for $200,000 for 10 percent equity in the company. Hafer would use the additional funding to do more marketing, such as securing endorsements from professional football players.

It's perfect for tailgating and the beach, Hafer said. I can confirm that the contraption works, as I just barely missed knocking over a group of people waiting in the line outside while trying to catch a pass from The BallCannon. 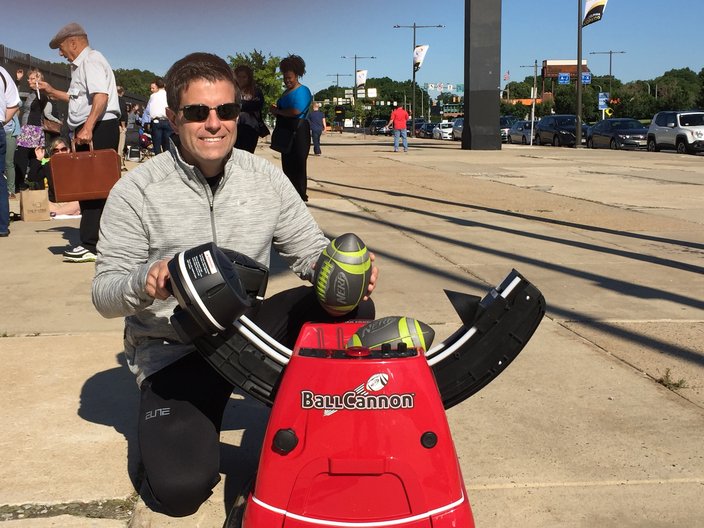 Fred Hafer, of Reading, Berks County, crouches next to 'The BallCannon,' a patented machine that shoots Nerf Football passes.

I can also confirm that Hafer, 52, is of the "Fun Dad" variety. When I first approached the cannon and asked a teenage boy what it was, a big grin widened across his face as he pointed over to his father (Hafer) and said I should talk to his "boss." Bring your child to work days must be pretty cool when your dad makes giant toys.

Laura Jiencke and Adam Taub of Kayle Concepts hold up a pair of Bluebee Pals, interactive toys designed to educate and entertain children.

Growing up, most kids had at least one toy that could talk, so to speak (think "There's a snake in my boot!"). But that toy was probably limited to a number of phrases and words, triggered by a button inside the doll or action figure. Bluebee Pals are seemingly the next step in the R.O.B. to Sherriff Woody evolutionary chain.


Bluebee Pals are the first educational, plush learning tools, said Laura Jiencke, founder and CEO of Kayle Concepts, which developed the Pals and is looking to the Sharks to help with inventory and distribution.

They sync with a phone or tablet and through the device, a person can make his "Pal" tell a story, speak in different languages or sing a song, among many other things. Jiencke demonstrated how the toy works, showing how once the Pal is paired using Bluetooth, the mouth moves and does whatever its instructed to do through the device (thankfully, the moving mouth feature is not as nightmarishly creepy as the Louis Armstrong bust my late grandfather used to keep in the living room).

You can watch Jiencke's demonstration below:

And, like Kidzgoo, it's got a weird-as-heck name and is meant to educate children, not just entertain them.

"The Bluebee Pal becomes the teacher," she explained.

So, which of these four pitches was your favorite? Vote in our poll below: