Shooter gets resentencing for 2013 slaying outside Philly biker gang club

Man reportedly opened fire outside clubhouse after getting kicked out 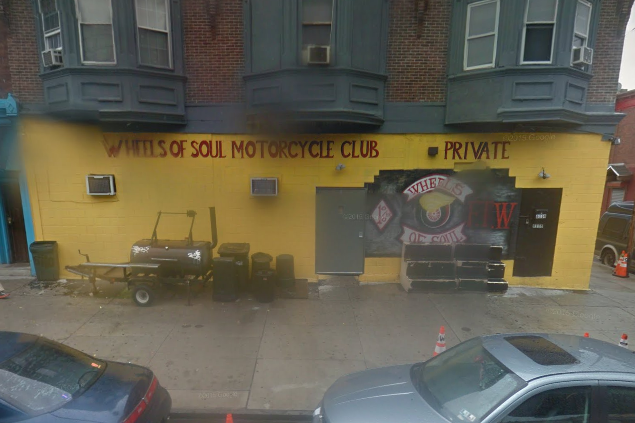 Pictured is the clubhouse for the Philadelphia Chapter of the Wheels of Soul Motorcycle Club located near 61st and Market streets.

The man convicted of fatally shooting a member of a Philadelphia biker gang outside the group's West Philadelphia clubhouse will have his sentence revised, according to a Tuesday court ruling.

The Superior Court of Pennsylvania has ruled that part of Daniel Tucker's sentence will be vacated and his case remanded to Common Pleas Court for resentencing for the incident that played out in the early morning hours of Jan. 6, 2013.

But since Tucker's legal win only affects one of the many charges for which he was convicted, he will likely still spend at least 35 years in prison for the bloody scene that occurred outside the 61st and Market street clubhouse of the Philadelphia Chapter of the Wheels of Soul Motorcycle Club.

The request for resentencing was one of five appeals made by Tucker, who raised issues with how witness testimony was presented and with the state's case that Tucker had "intent to kill" the two others shot outside the club that morning. The other four appeals were squashed by the Superior Court ruling.

According to a trial court summary of the case facts, members of the gang were returning to the clubhouse around 5:40 a.m. after attending a funeral for a fellow member in Chicago.

There, they were greeted by Tucker, a regular at the club despite not being a member of the gang. Tucker reportedly greeted them and opened fire, striking three members: Richard Motes Jr., Nezzer Pankey and Rodney Turner.

Tucker fled down Dewey Street. Motes was struck in the thigh, while Turner was hit two times in the neck, once in the buttocks and another bullet grazed his left chest.

Pankey was shot in the left side of the head, and the bullet traveled into his brain. He was pronounced dead later that evening.

Mahogany Livingston had been at the club earlier and left at about 5 a.m., only to realize that she had left her cellphone there upon returning home.

When she went back to get her phone, she said she noticed a man, who had been kicked out of the club earlier, waiting outside with his hands in the pocket of his sweatshirt, where there appeared to be the imprint of a gun.

Aaron Burnett, who had been working security at the door, said he kicked Tucker out that morning for being unruly. When Tucker left, he said, “I will be right back," according to Burnett's testimony.

Livingston said she told those in the club she had seen someone outside with a gun, and shortly after that, heard gunfire.

An arrest warrant was issued for Tucker, and he was taken into custody in April 2013.

Tucker was originally sentenced in the Philadelphia Court of Common Pleas in April 2015 after a jury convicted him of third-degree murder, two counts of attempted murder, aggravated assault, possession of an instrument of crime and two counts of violation of the Uniform Firearms Act.

It is one of those counts of violating the Uniform Firearms Act for which Tucker will receive a resentencing.

According to the Superior Court's ruling, Tucker was originally given a five-to-10-year sentence for one of the violations, despite the fact that it was a third-degree felony, for which the statutory maximum sentence is seven years.

Yet that will only alter a fraction of the totality of Tucker's continuous sentences, which amounted to 35 to 70 years in prison.

Tucker also called for a mistrial because of testimony from his ex-girlfriend, Brianna Poole, that was read in court by a prosecutor. Tucker was at her home at the time of his arrest.

Yet because Tucker's legal counsel didn’t immediately file an objection following the reading of Poole's testimony, the Superior Court ruled that Tucker failed to raise the issue in a "timely and specific" manner.

Another appeal from Tucker said that the verdicts of third-degree murder, which means no prior intent to kill, and attempted murder of Turner and Motes proved inconsistent. Tucker was acquitted on first-degree murder charges for Pankey's death.

But because the attempted murder verdicts stand alone based on the evidence to support them specifically, and not in relation to the acquittal of first-degree murder, Tucker's argument was "misdirected," the court ruled.

Two other appeals regarding the admission of a previous statement made by Motes to police and denied continuance for DNA testing of a knife found at the scene were also shot down in the ruling.