Should robbery victim have been charged for shooting suspect? 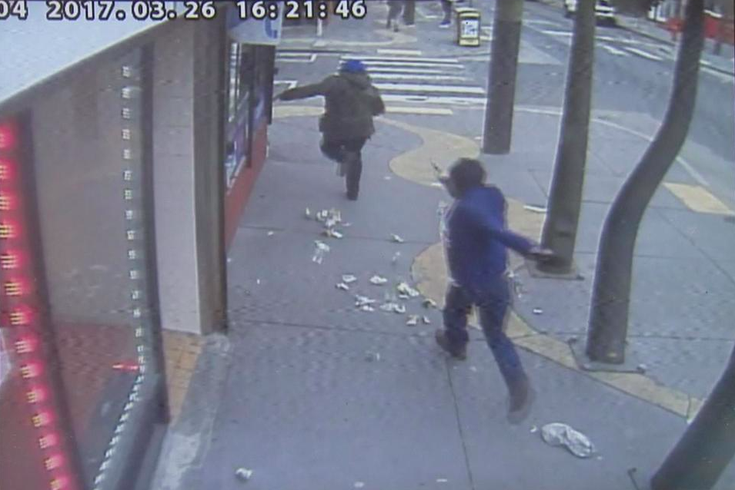 The owner of a Fairhill laundromat shot a robber twice as he fled from the scene of the crime.

What grabbed most people’s attention regarding Sunday’s armed robbery at a Fairhill laundromat were images of folks scooping up $2,000 in cash money that the perp made rain while running away.

What caught mine was the lack of a debate about whether the store owner was justified to shoot a bystander and a suspect whose back was turned to him as he fled the scene.

Cops and prosecutors seemed to think so, announcing that charges wouldn’t be filed against the gun-slinging robbery victim. I don’t necessarily agree.

It’s rarely wise or philosophically easy to pass judgment on heat-of-the-moment reactions. I say this because you can’t really know how you’d react unless you're facing the same circumstances.

Still, this is what we as a people do when observing everything from crime and sports to politics and neighborly relations. It’s in our nature. It’s what we do.

We can’t really know what was going on in the Launder Center’s owner’s mind when he unloaded his legally owned five-shot revolver at Fifth and Cambria streets on Sunday.

What surveillance video and police accounts show us, though, is that a 42-year-old robber pointed a knife at the owner and demanded money. When the money was handed over, the suspect began running away.

That’s when the owner grabbed his gun, pursued the suspect who “basically tossed (the $2,000) into the air” and emptied his gun. He struck the man twice and shot a 52-year-old woman, who just happened to be in the area, twice in the hand.

Sure, Pennsylvanians have the right to protect themselves – and stand their ground – via the Castle Doctrine, which doesn’t require victims to retreat when confronted with a weapon.

You needn’t punish a crime victim to loudly declare that those shots shouldn’t have been fired.

That’s all well and good, but what about when an alleged criminal – and his or her weapon – has already retreated and the loot is no longer in his possession?

If you’re firing then – instead of checking on your wife, the person you’d tell a reporter through a translator you were worried about – is it more about risk reduction or payback at the risk of killing random passersby?

Should you face charges if you choose to fire a deadly weapon at a fleeing suspect whose back is turned to you?

I’m sure the robber thinks so.

The bullets landed him in critical condition at Temple University Hospital, after all. Of course, none of this would’ve happened hadn’t he not decided to (allegedly) rob a laundromat in one of Philly’s rougher areas, so sympathy won’t find its way to him.

I’m sure the laundromat owner doesn’t think so.

He fired those bullets after making a heat-of-the-moment decision under extreme duress. He was a crime victim, after all. Of course, none of this would be up for debate hadn’t he decided to give chase, though.

Taking that into account, it’s hard to argue police should have charged the owner for opening fire on a public street as the threat level against him was dropping exponentially.

Setting aside the fact that a jury likely wouldn't convict the laundromat owner, it’s worrisome that officials can quickly look the other way after an incident during which innocent bystanders were placed in peril, though.

Things could have been worse. Much worse. That shouldn't be glossed over.

You needn’t punish a crime victim to loudly declare – in the spirit of life-or-death “teachable moments” – that those shots shouldn’t have been fired on Sunday, or any time in the future.

It’s not a tragedy that the robber took two bullets, but it would be a tragedy if this case becomes built-in justification for other crime victims to take matters into their own hands when they're not faced with the imminent need to protect themselves.