Should this Mummer get arrested for a Hillary Clinton joke? 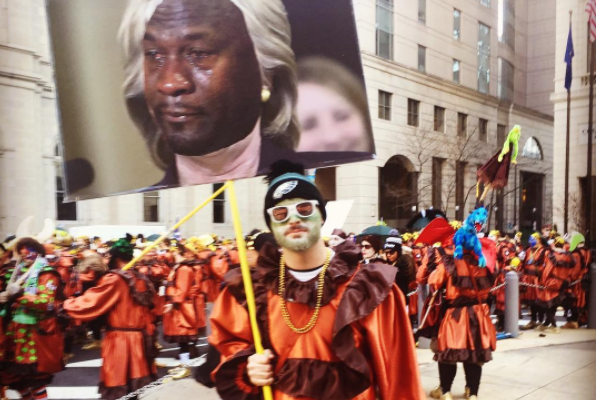 Philadelphia mummer Dan Callahan posts on social media a picture of himself holding a sign making a joke aimed at Hillary Clinton. He said police threatened to arrest him over the sign.

A Philadelphia Mummer is claiming on social media that police threatened to arrest him over a sign that makes fun of Hillary Clinton.

The mummer, identified on social media as Dan Callahan, a member of the Wench Brigade Froggy Carr, posted a photo of himself during the New Year's Day parade on Sunday dressed in his costume and holding the sign, which shows a crying Michael Jordan meme on Clinton's face.

Callahan then said on Twitter that police threatened to arrest him if he didn't get rid of the sign. He also said the officers' reasons was "we don't want anyone to be offended."

Philly PD told me to get rid of my sign or I'd be arrested. Reason being: "we don't want anyone to be offended". #Mummers

Others quickly chimed in to dispute Callahan's version of events and defend the Philadelphia Police Department. One user, who claimed to be a former member of the PPD, called Callahan a "fraud" and a "clown" while maintaining the officer's threat of arrest could have been "said as a joke."

However, Callahan responded and stuck by his original claim that he was stopped by police officers about his sign. He clarified that the verbal threat was made "by parade officials with police present." Callahan indicated that he complied with the demands since he was threatened with arrest in front of a police officer.

@Mike_Cerm @Nicadelphia @thephillyvoice correct, but when I'm told by parade officials with police present that I'd be arrested, I complied.

This comes on the heels of last year's Mummers parade when members received national backlash over a number of skits and incidents that occurred outside the parade route and were deemed inappropriate and insensitive.

In addition to a performance that made fun of Caitlyn Jenner, several men in Mummers gear also beat a gay man.

The backlash prompted Mummers and city leaders to meet and come up with new requirements aimed at making the parade "safe, family-oriented entertainment."

Those requirements included sensitivity training for Mummer captains and that Mummers need to submit programs, themes, costumes designs and makeup to city officials for recommendations and approval. Any group that does not comply will not be eligible to be judged.

An immediate attempt by PhillyVoice to reach Philadelphia Police was unsuccessful.