Robert Covington, Jerami Grant, and JaKarr Sampson are put under the microscope

When writing the introduction for this post, I just so happened to go a little long. If you’ve had the misfortune to read my work before, that turn of events shouldn’t come as a major surprise. Anyway, I decided to continue the season review series by grouping together Jerami Grant, Robert Covington, and JaKarr Sampson because of their similar ages and contract statuses. One thing led to another, and Covington received a Chandler Parsons comparison by the end. The intro can be found here.

Because that post ran so long, I decided to split the Grant, Covington, and Sampson section into two. In this post, we’ll jump right into reviewing their individual seasons. Let’s begin with the man of a million nicknames: Bob, Bobby Buckets, Big Shot Bob, RoCo, Lord Covington, and many more.

By March, Covington was not only entrenched in the Sixers’ starting lineup, he was also the unofficial team spokesman. Before home games late in the season, the Sixers would frequently have a player hop on the microphone and thank the fans for their support. Such a job is usually left to the face of the franchise, like Kevin Durant in Oklahoma City or Stephen Curry in Oakland. For the Sixers, Covington was that guy. It wasn’t quite Linsanity, but still a meteoric rise for a member of the Grand Rapids Drive in November.

The Sixers were the second-worst 3-point shooting team in the league, and doggone it they would’ve finished last by a mile if they didn’t pick up Covington. Brett Brown gave him a greener light than the one Jay Gatsby was staring at all of those years and he delivered. Despite only appearing in 70 games, the 24-year-old swingman hoisted the tenth-most triples in the entire league (446). Not only that, but Covington knocked down a very respectable 37.4 percent of ‘em. For reference, the league average was 35 percent.

Let’s keep track of statistics that attest to Covington’s offensive goodness moving. He played the second-most minutes on the team, and the Sixers scored 6.1 points per 100 possessions fewer with him off the court. That’s a pretty significant number. Another way of explaining that is the Sixers went from being the league’s worst offense (but just by a little bit) to the NBA’s answer to the Washington Generals once he stepped off the floor. With all of that in mind, what is there for him to work on in the offseason?

“Now that I have a season under my belt, I know what to expect,” Covington said. “I know how teams are going to guard me so I can incorporate those things into my workouts and add other things to my game during the summer.”

Already a respected sniper, the way that teams will defend Covington is by taking away his airspace and forcing him to put the ball on the floor. He could stand to work on his ball-handling a little bit, but the good news for him is that shooters don’t need a super-tight handle to get into the lane consistently because they’re often attacking closeouts. The one area I would like to see Covington improve is as a playmaker, but the presence of Joel Embiid and Lottery Pick X should make facilitating much easier. To be honest, I think the guy has the goods offensively. Once the talent around him improves, he should get even better.

Defensively, Covington could stand to bring more consistent effort and pay more attention to detail. Brett Brown benched him a couple of times for those reasons, and he’s clearly not as popular with the coach as the other two guys in this post. To be clear, I don’t think Brown dislikes Covington and I don’t think his defensive effort is terrible outside of a few hiccups here and there. Kyle Korver is a current player that he should aspire to be defensively.

Count me as a fan of Covington’s skill set. If 2014-15 is his floor, Sam Hinkie did a nice job scooping him up out of the D-League. He looks like a rotation guy in the league for close to a decade, and certainly not a patsy. 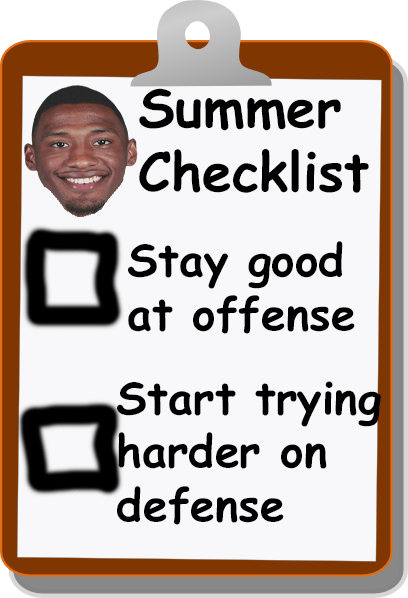 While Grant currently isn’t the same caliber of player as Covington, you could make the argument he has a higher ceiling. The only reason that the bouncy Syracuse forward lasted until the 39th pick in last year’s draft was his godawful shooting coming out of school. Check out a couple of sentences from his Draft Express dossier:

Grant ranks as both the least prolific and efficient jump shooter in this [small forward] group, scoring just .58 points per jump shot on 1.8 attempts per game… Attempting just five 3-pointers last season and connecting on only 29% of his total jump shots, Grant has questionable mechanics and is not an intimidating threat away from the basket at this point in his career.

This being the Sixers, where the world really is your oyster on offense, you betcha Grant jacked up 143 shots from beyond the arc. He only connected on 31 percent of them, which isn’t great in a vacuum. Fortunately for Grant and the Sixers, this isn’t a vacuum. Read that scouting report again. Hinkie drafted a guy that has every physical tool you could want, but he literally might have been the worst shooter in his class. 31 percent on 143 attempts isn’t good or even close to average, but it’s a definite step up from whatever he was doing under Jim Boeheim’s watch.

“I think I had a good stretch, so I’m going to try to build off that in the offseason,” Grant said, specifically referring to the month of January during which he shot 47 percent from distance. ”I had some struggles, but I think that comes with the rookie year. I’m not really worried about it. I just know that I’m going to come back a better player next year.”

For that to happen, he needs to work on his shooting first and foremost. That much is apparent. A hybrid forward, perhaps a more interesting question is what position Grant sticks at, something that usually boils down to which position a player can credibly guard. Grant is a complicated case defensively. It’s easy to remember the type of athletic plays you frankly don’t see very often even on an NBA floor. Grant finished with eight blocks in a single game against the Knicks (and they all were emphatic), and he ended up fourth among all rookies in block percentage behind Nerlens Noel, Jusuf Nurkic and K.J. McDaniels.

Plus, like, how about those dunks? Pretty good, huh?

The question is if he can consistently do the little things to turn into a plus team defender. Working on his strength and ball-handling are also areas he believes he should focus on this summer. For the record, he’s right about those things. As for whether Grant plays the 3 or 4, the 21-year-old says he doesn’t care.

“It doesn’t matter at all to me,” Grant said. “Whatever position they put me at, I’m going to go out there and play as hard as I can.”

Grant isn’t even an average player yet, but there’s already a foundation laid down that you can talk yourself into while imagining 2-3 years down the line. He resembles the whole franchise in that regard. Now, we’ll get to see if Grant can build on his dunk-filled rookie year. Regardless of whether he does so or not, I’m excited to find out. 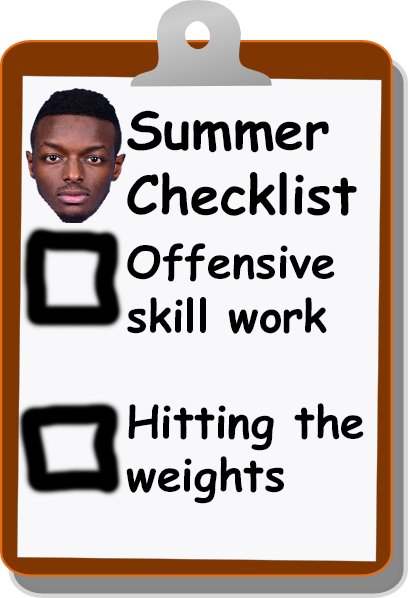 The second-greatest basketball player to come out of St. Vincent-St. Mary High School in Akron, Sampson might’ve been the year’s best story. An undrafted small-ball 4 out of St. John’s, the 6-foot-8 rookie acquitted himself fine in 1131 minutes. He even got the chance to play some point guard this year out of necessity (#PointKarr).

While not necessarily good in relation to the rest of the league, his true shooting percentage of .498 was actually a decent bit higher than Grant’s (.470). The owner of a quirky offensive game, Sampson surprisingly had an arsenal that included floaters, runners, and push shots. I liked how under control he was on most of his drives, using his frame well to shoot over smaller defenders. Chip Kelly, he of the “big people beat up little people” school of thought, would likely approve.

Speaking of defense, Sampson gets after it on that end of the floor. In his case, the Sixers bet on elite length, athleticism, and positional versatility winning out over time. After watching the 22-year-old wing over a whole season, I can confidently say it was a worthwhile gamble. When the Sixers built a real defensive identity at around the middle of the 82-game schedule by switching liberally, Sampson fit right in. As is the case with Grant, we need to see tangible skill development if Sampson can reach his potential. As he told me, he plans to be “in the lab” all summer long.

“I feel like I took everybody by surprise by my offensive improvement and me becoming a legit wing,” Sampson said. “I even played some point guard… I feel like I’m making a good transition.” 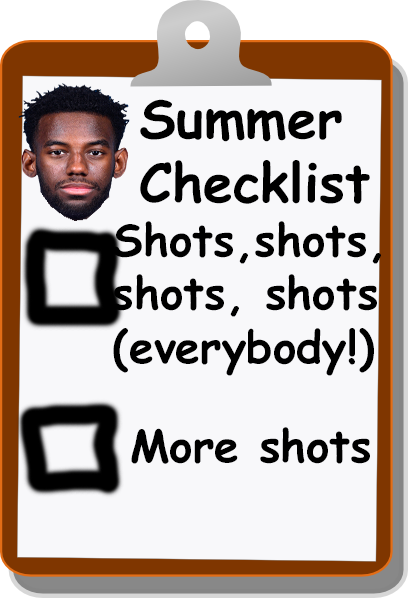