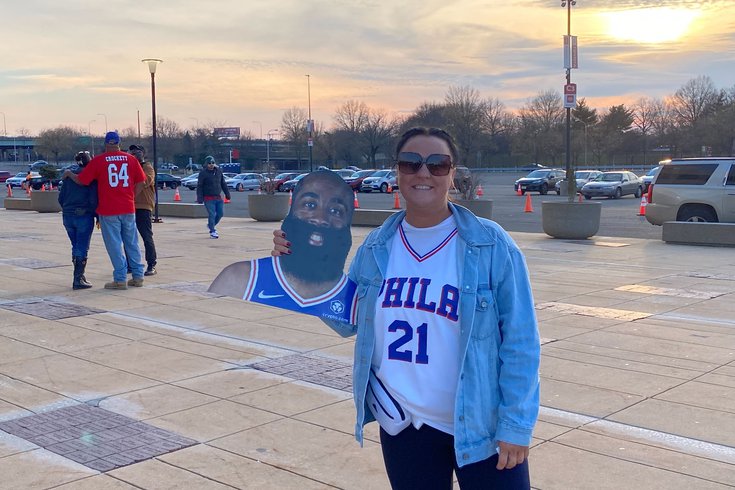 Initially, it may have seemed disappointing that newly acquired superstar James Harden played his first two games for the Sixers on the road. When Harden put up two magnificent performances over the weekend, averaging 28 points, nine rebounds and 14 assists during those Sixers wins, that thought went out the window. It wouldn’t be anticlimactic. It only heightened the chance that the roof would get blown off the Wells Fargo Center on Wednesday night.

Harden balling out brought that buzz. It brought hype. It brought fans rushing to South Philly to catch a glimpse of the type of player Sixers fans have dreamed of playing for their team.

Stepping into the arena’s parking lot on Wednesday, it quickly became clear that Harden mania is only getting bigger in and around the city.

More than two hours before tipoff, there was Stacie Southard bopping around outside the Wells Fargo Center. Southard came equipped with a giant cutout of Harden’s head. With his trademark beard, is there a better athlete out there for one of these than Harden?

“Ahh!” Southard yelped in the most amazing, endearing, Philadelphia way possible when asked what her initial reaction to the Harden trade was. Southard already had tickets for this game before the Harden trade and before it became known this would be his home debut. She’s not complaining though. “We never have that luck.” Southard said. She’s never had this type of luck and the Sixers have never had a player like Harden. The last two weeks have felt like fans reaching 21 in blackjack over and over again.

There were two brothers, Brandon and Kyle, getting in on the festivities before the game. “It’s going to be lit in there. It’s going to be crazy,” Brandon said. The duo hadn’t been at a game since Evan Turner scored 26 points against the Celtics back on March 7, 2012. Ten years. Ten years! This is the most explicit example of the Harden effect. It sure was lit. Harden put up a 26-9-9 stat line that’s become typical for him. Joel Embiid and Tyrese Maxey both topped 25 points each too in the nationally televised win over the Knicks.

interviewing some Sixers fans down in the Wells Fargo Center parking lot for a story for @thephillyvoice.

just talked to a pair of brothers who said the last time they were at the game, Evan Turner was still on the team.

Brandon and Kyle asked if they could curse in his interview. They were allowed to, but it wouldn’t reach this website. They had some choice words for Ben Simmons, the Nets, Kevin Durant and Kevin Durant’s hair that I’m sure many Sixers fans would echo.

A cocky Philly sports fan is a scary proposition for the rest of the planet. Beware, world, this is what happens when you allow a team absolutely starved for a star guard to land Harden.

Sixers fan Brian Coulter was done with the Sixers after watching the team’s disastrous collapse against the Hawks in Game 7 of last year’s Eastern Conference Semifinals series. He vowed to never go to a Sixers game again until Ben Simmons was off the team.

“Hearing the sound of just utter defeat when Simmons passed up that dunk, being in that crowd, I didn’t want to go to another Sixers game until he was gone. As soon as that trade happened, the first game I went to was the game against the Thunder, the first game after the [James Harden] trade. That was the impetus for me to really want to start going back to games,” Coulter said. “I was here for Game 5. I was here for Game 7. I was not going back to a Sixers game until he was gone. It’s a whole new world for a lot of fans. It’s joyful. The possibilities are now open to us again.”

My personal goal of not going back until he was traded is complete. pic.twitter.com/HhM97gwsDT

When Coulter arrived at the Wells Fargo Center for Harden’s home debut, he knew something was different. “As soon as you walked through the parking lot, you could feel it right away. It felt like a playoff game even though it’s early March,” he said. “You saw the lines forming outside. It was crazy.”

There were a few Sixers fans even more indebted to Harden than usual down at the arena. Friends Dan Klausner, Jason Aversano and Eric Fink had won some cash over the weekend betting on Harden same-game parlay prop bets and used that money to buy tickets to the biggest home game in years. The Harden experience was quite literally paying for itself.

“Everything is really cool right now. They did a good thing,” Klausner said about the Sixers swinging the monumental trade to get Harden. “They needed to capitalize on Joel’s great season. It worked out!”

Aversano loved the vibes in the arena, a stark contrast from the many Flyers games he attends, which he says are “as exciting as going to T.J. Maxx.”

“Harden is the gift that keeps on giving,” he continued about how Harden’s great play gave him the funds to get in the door on Wednesday. “It felt like it was like an Eagles game when you got down to the parking lots tonight. This is matching that energy.”

No one may have been more animated and amped than Fink, who repeatedly shouted that the crowd was buzzing. “I feel good. Everyone I see has smiles on their faces. There’s a different kind of energy in the building. I just had to be here. I have to welcome James to the city. Our city. My city. Your city. It’s time. Let’s go get ourselves a Larry [O’Brien Trophy].”

Like Coulter said, it’s only March. I can only imagine how raucous these people, as well as all Sixers fans, will act if I recreate this story before the team’s first NBA Finals home game in 21 years.