What are reasonable expectations for James Harden next season? 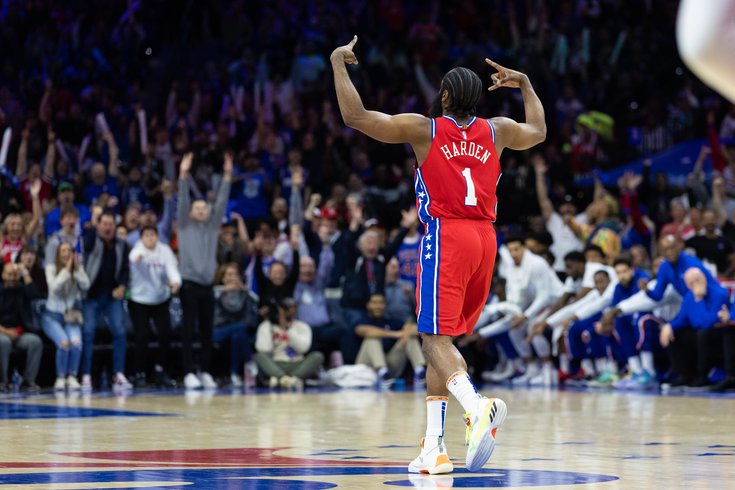 James Harden hasn't officially put pen to paper yet, but whenever he gets around to it, he will be locked in for another year in Philadelphia. And even for the group skeptical about the Harden experience, he returns on great terms for the Sixers, having allowed the team to improve around him without locking into a long-term deal.

"What does Harden have left to offer?" is the big question looming over Philadelphia's plans, what I would argue is one of the biggest questions in the NBA moving forward. If Harden comes anywhere close to his previous MVP form, the Sixers will be able to lay claim to one of the best duos in the NBA and a chance to compete with anybody. But their worst-case scenarios are grim, built around two stars whose bodies you can't really trust and a war chest low on assets to improve the group. So much of this project now rests on Harden's shoulders, the assumption being he's still fit enough to carry a heavy load.

That in mind, and not knowing what No. 1 will have to offer until we see it on the floor this fall, I put together a few goals I think are reasonable to set for Harden that don't involve him scoring 30 a night and dragging a team to success.

Goal No. 1 — Lead the Sixers to a top-eight offense

Top eight might sound arbitrary to someone who wants one of the typical signposts (top five or top 10) but it's a number I settled on for a few reasons:

Add it all up, and the bare minimum Harden has to do is come back and match the offensive pace they set last season over the course of a full year. That doesn't seem like a huge ask, and their ceiling feels a good bit higher than that.

The most encouraging part of Harden's brief tenure in Philadelphia last season was his ability to synergize with Joel Embiid right away (and vice versa). Though I noted in this space that Embiid had handled a pick-and-roll partnership well when playing alongside Butler a few years prior, many openly questioned whether he would be able to thrive in that offensive role alongside his newest co-star. These two did not just quiet concerns about their chemistry, they became the most effective pick-and-roll combination in basketball, generating the most points per possession on pick-and-rolls of any duo that logged 500-plus possessions together.

This was, mind you, with Harden struggling to recapture the scoring form that cemented his name on the NBA 75th Anniversary Team, noticeably less explosive than he has been in the past. Runners and floaters that were an effective and impactful part of his game were basically a one-in-three bet to fall for Harden last season. If Harden is able to reclaim just a little bit of extra burst, some more explosiveness on the way to the rim, the NBA's most dangerous pick-and-roll combination somehow becomes even more lethal. The better that combination is, the easier life gets for everybody else.

Philadelphia's case to push for a spot in the top five certainly isn't out of the question. Last year's No. 1 offense (the Utah Jazz) appears on the verge of a full-scale teardown, so I'd expect them to drop out of the top 10 altogether unless their plans change considerably. Atlanta sat at No. 2 last season, and while adding Dejounte Murray should be a boon for them as a group, I'm not sure the offensive fit with Trae Young will be as seamless as they'd hope early on. And Memphis is probably the young team due for a bit of regression on offense, with several valuable role players moving on to other destinations (not to mention any concerns about Jaren Jackson Jr. returning from foot surgery).

Harden's durability was perhaps his most underrated trait as he ascended to the top of the league's star hierarchy in his prime. The Rockets didn't exactly surround Harden with a team full of iron men at his peak, with various maladies holding back guys like Eric Gordon and Chris Paul from being available as much as you'd like. So Harden did his best to provide Houston's drum beat, appearing in 70-plus games for the Rockets for seven straight seasons. Harden even managed to play 68 games in 2019-20 during a COVID-shortened year, all of which may have had something to do with the hamstring problems he dealt with to end that season.

This is not a demand for Harden to push his body to the limit for regular-season games that ultimately don't mean as much as their playoff identity. But for the Sixers to get where they want to go, Harden has to be healthy and available enough for this team to have a firm grasp of who they are by the time the postseason hits. If he can suit up in at least 70 games, it'll go a long way toward that goal.

One of the big questions for Harden heading into his mid 30s is the condition of his body, both because he has had recent issues and because he has not exactly hidden his desire to enjoy the off-court lifestyle that comes with being an NBA megastar. My personal position on covering the league is to focus my evaluation and time on what happens between the lines — some people are able to handle a more rigorous social life than others, and so long as that doesn't impact their ability to do their job and be a functioning member of society, I don't feel it's my right to cast judgment. But how he deals with the aging curve is something that will be front of mind as his future value is determined by teams (including the Sixers) and Harden himself. What are you willing to do to ensure you can resemble your best self for as long as possible?

According to Harden, that's something he's thinking about and incorporating into his day-to-day life:

“I’ve got to be cautious of what I eat, because as you get older, your metabolism slows down. It sucks honestly, because I love to eat and I don’t want to be having to watch how many calories I intake. I don’t shred fat as fast as I used to, so I have to work extra hard, especially in the summertime. In the summertime, I just want to be free; I want to eat, sip wine, and do whatever I want to do. And it’s still [early summer], so I don’t want to be going crazy working out now, but I am going into year 14, so I’ve got to be cautious as far as hitting my peak — when I’m supposed to be in my stride — going into the season.” [Haute Living]

There has been a lot of "I'll believe it when I see it" applied to Harden's brief tenure in Philadelphia, but so far, Harden has been pretty consistent at living up to his word. Any concerns about whether he would return or actually sacrifice the money it would take to help Philadelphia build the roster were put to bed this summer. It's a different ask to expect someone to change their lifestyle vs. still making a boatload of money compared to, well, a bigger boatload of money, but all the returns have been positive so far this offseason.

(On the subject — a photo or video floated around of this recently, but I know that Harden, Embiid and P.J. Tucker were all spending time in L.A. working out together as recently as last week, with Harden more focused on sweat equity than a lot of the formalities of the contract process. We'll find out what it all adds up to soon enough.)

Harden has made it clear through both his words and his actions that setting up teammates has become a bigger priority for him in recent years. When he faced questions about his scoring downturn in Philadelphia last season, Harden repeatedly stressed to reporters (backed by his coach and teammates, mind you) that he was more concerned with team scoring than whether he was going out and getting 30.

It's more likely than not that the version of Harden who could drop 30 with ease is gone for good. But I don't see any reason to believe he should do anything less but compete for the assist title. Combine the group he has around him and his passing talent and he should be right there in the mix as he was last season, when he finished second to Chris Paul in helpers per game.

Let's start with his teammates — Tucker has been one of the league's most prolific corner three shooters over the last half-decade, and he is now reunited with the man who created for him over and over again. With that Harden/Embiid pick-and-roll combo working in the middle of the floor, Tucker should be expected to kill from that spot once again. Tyrese Maxey, who thrived as a second-side attacker with Harden in the lineup last season, should only be better in that role with an offseason's worth of improvement and more chemistry alongside his teammates. Danuel House Jr. has played his best basketball alongside Harden. Looking at the basic team structure, there will be fewer possessions that end with a shot coming out of the hands of an iffy shooter, as Matisse Thybulle's importance is not as profound this year.

And Harden, it must be said, remains one of the game's most devastating passers. Though his scoring output often relied too heavily on his stepback jumpers last season, he remained a creative, incisive passer at the point of attack. He can thread you a bounce pass through traffic, hit a player in the opposite corner on a one-handed pass, and make gorgeous hit-ahead passes to get the transition game moving. This bounce pass to Maxey early in the playoffs was one of my personal favorites of the year:

Honestly, it was often surprising that teams played him as more of a scorer than a playmaker, with Harden absolutely dismantling teams who chose to put two on the ball and force it out of Harden's hands. Should they continue that practice this year, Harden has shown he can make life easy on the entire team — Georges Niang stepped into open three after open three on basic 1/4 ball screens, and Harden will deliver that pass constantly if you give it to him.

Harden's ability to lead from the perimeter in big spots will be one of the biggest swing factors that determine this team's ceiling. Dumping the ball into Embiid in crunch time will be tenable in some situations, but most of the game's great bigs through history have needed the perimeter sidekick to help steer through troubled waters. But those are endgame concerns, rather than 82-game concerns. Harden feels like a safe bet to raise Philadelphia's floor by quite a bit this year, and I will continue to buy stock in his playmaking.