The preseason battles to watch for new-look Sixers 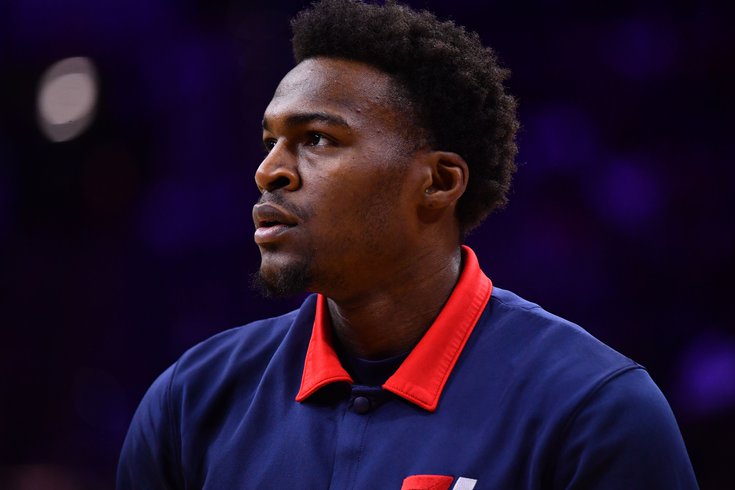 Media day has come and gone for the Sixers, which brings us to the point where we can start worrying about real-life basketball instead of quotes, social media shenanigans, and fake trades. Praise be. Tuesday begins a series of battles for playing time and prominence on the 2022-23 Sixers, with their first official get together of the season in Charleston kicking off a new year.

As training camp gets underway on Tuesday, here are some storylines I'm watching throughout the preseason.

The mix at backup center

You would have been forgiven for thinking the Sixers had settled on a one-man plan behind Joel Embiid when they signed Montrezl Harrell late in the offseason. He is the biggest name with the most decorated resume of the group behind Embiid, and his best years came under Doc Rivers in L.A. As it stands, I'd still call him the runaway favorite for minutes leader at backup center.

Throughout the offseason, though, I had a lot of discussions or gentle reminders from Sixers staffers to include P.J. Tucker within whatever picture I was painting about the backup center spot. At the time, I was a bit skeptical mostly because small ball has been an infrequent tool in Rivers' kit since he came here, and because I wasn't convinced they'd even benefit long-term if Tucker was battling bigger players throughout the season. But Rivers was pretty clear about the mix-and-match game they plan to use behind Embiid, lining up with everything I'd heard this offseason.

"This is the first year we don't have a seven-footer as a backup, we had Dwight [Howard] and [Andre Drummond], but we have a collection of guys with P.J., Paul Reed, and Montrezl Harrell that we feel very comfortable in that role," Rivers said Monday. "With P.J.'s age and Joel with his size, we want to make sure he's healthy, we want to do a better job in the games that some of those guys don't play. We want to win those games. With the collection, we feel very comfortable with what we have."

The second part of this quote feels important to me — as in, Rivers is saying that because of PJ..'s age they need to have and use other options throughout the season to preserve him and his ability to help in that spot over the long-term. Ergo, using Tucker in that spot is something they're actively motivated to do and try, rather than an afterthought or a place they might land by accident eventually.

That's a pretty big deal. While it might not be the favored outcome for the B-ball Paul supporters, it is ultimately a piece of the plan heading into the season, a look the Sixers are hoping to use, build on, and develop with an eye toward flexibility this season. And unlike in lineups with Harrell and Reed manning that spot, it provides the Sixers with a lineup where they could overload the court with either passable shooters or switchable defenders, perhaps even a perfect balance of both.

Though the roster situations are different, and this is simply a backup center battle rather than a starting/closing lineup quirk, we have seen Daryl Morey pursue smaller, sleeker looks around Harden in the past, as when he traded Clint Capela and effectively rolled with Robert Covington and/or Tucker as nominal centers. The coach ultimately has to want that sort of style for it to happen here, and Rivers is not as much of a non-conformist as Mike D'Antoni was, but Rivers appears on board from what we know so far.

As for Mr. B-ball, who looked to be in strong position for backup center duties before Harrell arrived, Reed says he's focusing on what he can control and not how his path to PT has gotten tougher.

"That doesn't change anything about my mentality," Reed said at media day. "I think he's going to come in and help us win some games, and I think he's a great addition to the team. I'm just glad that we got some extra guys on the team that's gonna help us go out there and win games. My mentality stays the same, I'm still the same dude that's going to go out there and keep working on what I need to get better at."

Aside from Tyrese Maxey and Reed, who have been notorious grinders since joining the team, it was Matisse Thybulle who Rivers claims spent the most time working on their game this offseason. Impossible for us to know without legitimately spying on these guys all summer, and perhaps this is a sales tactic by a team who knows Thybulle could be a make-or-break chip in any all-in transaction they could make during the season. But it's another wrinkle in what should be a surprisingly fun battle for minutes on the bench.

There's a group of guys I would consider stone-cold locks to play at least a solid number of minutes every night this season: Joel Embiid, Tobias Harris, James Harden, De'Anthony Melton, Tucker and Maxey are the slam-dunk picks. Thybulle and Danuel House Jr. are probably closer to being within that group than fighting for PT, but it feels like more of a mix-and-match game beyond that. As noted in the backup center discussion, people will be in and out of the lineup for any number of reasons. The demands of a matchup, the form of each player, and the desires of their star players will ultimately loom large for most guys on this roster.

(A word to the wise — do not discount that last bit, not now and not ever. Without downplaying a coach's power here, who a star wants to play with can be a fairly straightforward tiebreaker if the numbers, the eye test, and members of the staff can't come to a consensus on positional battles.)

It'll be an ongoing choose your own adventure novel this year. On my end, how much they play Thybulle and when is a source of some intrigue with Melton on the roster. They're not like-for-like on defense, where Thybulle's length gives him a better chance to win certain matchups, but both are at the high end of disruption defense and Melton is the far superior offensive player. You could dream about the havoc they could create together, and I suspect we'll get plenty of shared minutes for those two this year, or you might feel content with Melton as the lone ranger flying around in passing lanes, opting for more reliable shooting in other spots.

How, for example, does someone like Georges Niang feature in this year's team? Last year, he was an ultra-reliable shooter all season, an excellent shooter on good volume who immediately fell into a groove with Harden in 1-4 actions (his knee trouble and Heat series struggles notwithstanding). But if the team wants to get Tucker and Harris minutes as undisputed fours with sleeker 1-3 options in bench lineups, Niang could end up being squeezed for time. Shake Milton has typically been a bench-unit leader for this group when healthy, and expressed a desire to be one again at media day. We'll see how much time he gets with this group, with the three-man weave of Harden/Maxey/Melton likely combining for the lion's share of guard minutes in different combinations.

For now, everybody seems fired up about what they have and the atmosphere the additions have helped create heading into camp.

"We're going to get the best out of each other," Niang added. "You look at the teams that have won championships years past, they all have depth, and I think that's something we wanted to add this offseason. We've done that, and I'm excited. Competition is a great thing."

Final man on the roster

The end-of-roster battle is something we'll be tracking throughout camp (and we wrote about this some last week), as it's rare that the Sixers have had enough good players to worry about the end of the bench. From my vantage point, there are essentially three guys competing for the final spot on the roster, and one has a leg up on the others.

Those three men: Isaiah Joe, Trevelin Queen, and Charles Bassey. Joe entered the offseason as perhaps the most likely candidate to be cut, but based on his own performance this summer and the way the roster has evolved since, he feels like the obvious frontrunner to lock down a spot here. Harrell's arrival is likely to squeeze Bassey out unless the Sixers opt to carry four bigs, which doesn't feel likely. Joe was a far superior performer at Summer League compared to Queen, fills a more obvious niche in theory, and is younger than Queen to boot, even if Queen's basketball journey makes measuring his experience in years tougher than normal.

I wouldn't write Joe's name in permanent ink just yet, though. While all of the above is true and Joe is theoretically a dangerous and flexible shooter, that is still mostly theoretical in NBA terms. The idea is that his combination of good free throw numbers, effortless form, and pockets of success are indicators of what could happen if he gets a larger opportunity, all of which is reasonable. That said, it would not be shocking if Queen looks better on an NBA floor with real spacing than he did in Summer League, proving more useful with room to operate and real NBA talent alongside him. Perhaps unlikely, but not impossible that he wins a camp battle and the team decides to roll the dice on a different sort of player to fill that final spot on the roster.

The exciting thing here is that Joe, who some fans earnestly believe should be a regular rotation guy, is someone who has to come out and earn his place. That speaks to the improvement of the roster, and this should help foster a super competitive preseason internally.