So, about that last play of regulation. This…

… does not quite equal this:

Doc Rivers has been excellent at drawing up set plays out of timeouts for a long time, and he clearly has more firepower at his disposal than Brett Brown. Chris Paul at the controls, DeAndre Jordan dunking anything thrown in the general vicinity of the rim, and J.J. Redick flying around screens are difficult enough actions to defend by themselves. When they’re all working in concert, the defense has quite a bit to think about.

Still, Brown really has to do better than the garbage step-back 18-footer that Jahlil Okafor shot 20 feet.

Last night’s column/gamer focused on how the offense stagnated and Ish Smith played far too much one-on-one down the stretch. The Sixers offense did more standing around than the beginning of the dance scene in “Heavyweights.” That trend led to Brown’s decision to substitute Okafor into the game with 10 seconds left and draw up the final play for him.

“It was part of the reason that I wanted to get Jahlil in, get him the ball at the elbow and let him go on DeAndre,” Brown said. “I didn’t feel like we were getting too much else from other places.”

Well, that whole "catching it at the elbow" part didn’t happen. 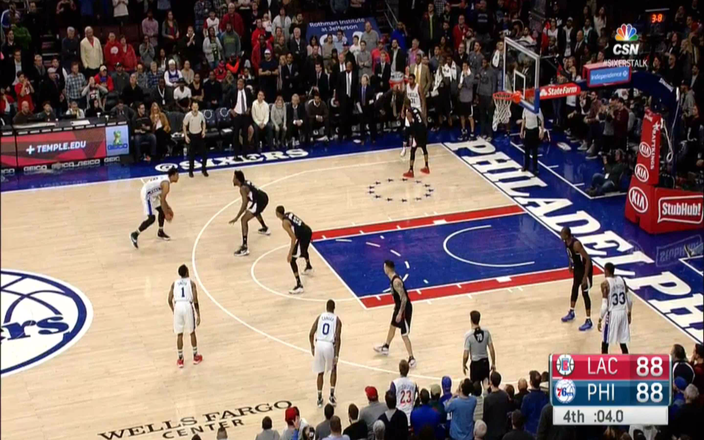 One of the specific areas that Okafor has struggled on the offense is carving out position. Too often, he surrenders his ground on a post-up and is perfectly content catching the ball 15 feet away from the hoop and facing up. Moving forward, that will need to change.

The Sixers are aware of this tendency. They want to see Okafor operate closer to the basket.

“We got this chart that we show him,” Brown said. “How many catches are you getting deep? How many times are you rolling on pick-and-rolls. He’s getting there, but it’s never to the volume that greedy coaches want.”

In Brown’s defense, Jordan is such a wild card defensively. A few times during last night’s game, Okafor got deep post position on the Clippers center and scored fairly easily. Other times, Jordan made Okafor like a helpless little brother trying to get his shot off in the driveway.

“I was trying to make sure I got the shot up in time, and I didn’t want to turn the ball over,” Okafor said of the last shot. “He’s such a good defender, he’s so long. Those were my two keys.”

Okafor is a 20-year-old rookie, and as he gets more experience, the hope is that his key will be to create the best look possible. The 6’11” center is so gifted when it comes to making shots, but now that he’s playing at the highest level, Okafor needs to work harder to create opportunities for himself.

“I think the balance of what we’ve seen with him being capable at that half roll and elbow area versus him just beasting some players,” Brown said. “I think it’s naïve for us to think he’s going to try to [beast] DeAndre Jordan, but I hope to grow a balance.”

Coach and player were both in a tough spot on Monday night, and they both failed. Brown said it was a learning lesson for his team, but it also should be one for him. Can he become less reliant on Smith’s shot creation and inject more movement into the offense late in games?

Local ratings up in Philly

Sports Business Daily dropped its annual study of local NBA television ratings on Monday, and to very little surprise, the Sixers broadcasts on Comcast SportsNet rank in the bottom five with a 1.07 average rating. Unfortunately, nobody (generally speaking) in Philly is tuning into watch the Sixers collect loss after loss.

On the bright side, it was even worse last year when the Sixers posted a 0.74 rating. No wonder Malik Rose left! The Sixers’ 45 percent improvement ranked third in the league behind only Golden State and Orlando. As to why this is the case, the world may never know.

For those who don't think draft picks matter to teams' bottom lines, Sixers up 45% in ratings this year. Would think that's Okafor right?