UPDATE [11:55 p.m.]: In a bit of good news for the Sixers – and terrible news for my credibility (see the first sentence of my original story below) – the Lakers pulled off an upset win over the Spurs on Wednesday night. The game's MVP as far as Sixers fans are concerned was Greg Popovich, who hardly played his starters in the 102-95 loss. Kawhi Leonard, Tony Parker, LaMarcus Aldridge, and Pau Gasol combined for just 64 minutes (an average of 16 each).

Combine that with the Suns' loss to the Warriors, and the Lakers (23-55), who have the third-worst record in the NBA, suddenly find themselves a game and a half behind Phoenix (22-57) in the race for the league's worst record. Currently, that belongs to the Nets (19-59), who despite having won three straight are two and half games worse than free-falling Suns – their loss on Wednesday night was their 13th in a row.

Those two results – the Lakers' win and the Suns' loss – don't change any of the percentages mentioned in the original story below.

They do, however, increase the likelihood that Los Angeles finishes the season with the third-worst record. Should the Lakers somehow pass the Suns, their chances of staying in the top three and keeping their pick out of the Sixers' hands would climb from 46.9 percent to 55.8 percent.

The Lakers will take on the Spurs on Wednesday night, which will likely result in them losing their 56th game of the season. But thanks to their win over the Grizzlies on Sunday – coupled with the fact that the Suns have lost 12 straight games – Los Angeles has moved one step closer to having to surrender their first-round pick to the Sixers.

The draft lottery is still over a month away, but the season is down to its final few games.

•  Thursday vs. Bulls
•  Saturday vs. Bucks
•  Monday vs. Pacers
•  Wednesday at Knicks

As it stands, the Lakers' pick is protected if it falls within the top three of the draft. The Lakers (22-55), who currently have the third-worst record in the NBA behind Phoenix and the Brooklyn Nets, now have less than a 50 percent chance (46.9 pct. to be exact) of their pick falling within the top three, according to Tankathon.com.

In other words, there's a 53.1 percent chance that the Sixers wind up with two top-10 picks in this June's NBA Draft. Here's a look at how the lottery should play out, via Tankathon.com:

But even if the Sixers aren't able to land a top-three pick on their own, their odds of landing multiple lottery picks is continually looking better.

For example, here's a look at how Tankathon's lottery simulator played out on my first time running it through: 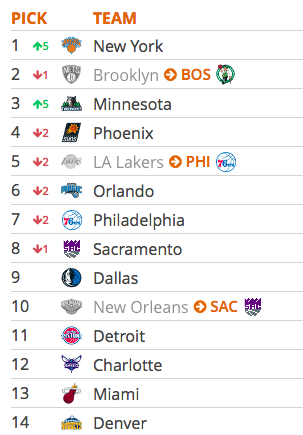 Sure, having a higher pick overall would be great, but two of the first seven? In the words of Larry David, that's...