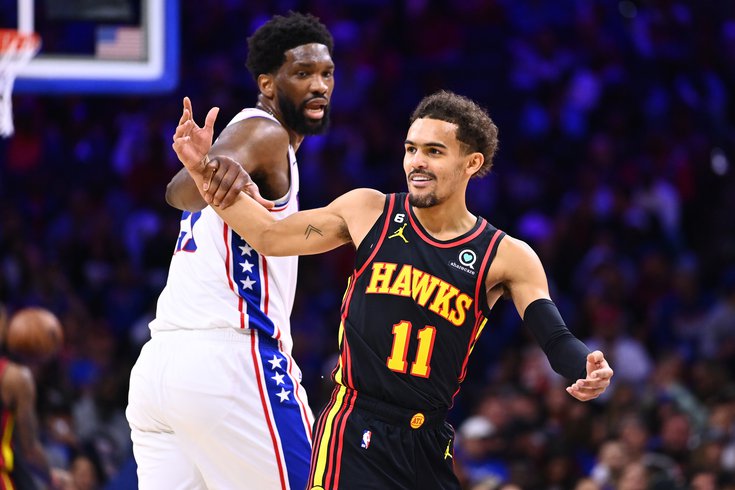 A 42-point effort from Joel Embiid was enough to push the Sixers to a 121-109 win over the Hawks, a nice bounceback effort for Philly to get revenge on the Hawks.

• Two days after laying an egg on offense in Atlanta, the Sixers hardly looked like the same team on their home floor. It helped that Joel Embiid started this one off smoking hot, torturing the poor Hawks with a series of twisting midrange jumpers they were powerless to stop. Embiid has pretty much always been a dominant first-half player, powering the Sixers to comfortable leads they've found ways to let dwindle, and he was at his best to open this one.

The pain train did not stop when the first quarter ended, or really, at any point during this game. Clint Capela is a good player, a guy who on his best day has made Embiid work with activity on both ends of the floor. The poor guy was simply helpless when Embiid had the ball in this one. Embiid hit him with jab steps, crossovers, spin moves, every little trick in the book to create even a foot of separation. As soon as Embiid had daylight, the Hawks could have just waited under the basket to collect the ball, because he was borderline automatic from midrange.

His turnover-plagued game in Atlanta was tough to watch, but Embiid has at the very least been trying to find his teammates and play quarterback with James Harden out of the lineup. Embiid sharing the basketball is important in numerous ways — it's obviously a great way to create open looks because of the attention he draws on every possession, but it tends to be a sign of his trust in the group around him, too. High-assist games for the big man say plenty about team spirit, and the six assists he had when he checked out in the third quarter honestly felt low. The big guy was dealing.

Not all of those attempts came off, with teammates missing jumpers and threes, but Embiid has also done a pretty good job of passing and moving so far this year, getting into advantageous rebounding positions or sliding into spots where he can get a clean look afterward.

Defensively, Embiid was ready to go for this one, and I thought that was the case to open the meeting in Atlanta even if it didn't finish that way. They still have issues to work through, but their baseline is a hell of a lot higher, and they're moving in the right direction.

Down one of their best defenders in De'Anthony Melton, the Hawks starting backcourt put a ton of pressure on Philadelphia in the pick-and-roll with Trae Young and Dejounte Murray frequently setting up shop inside the arc. Embiid did as well as could be expected at helping out on those guys without losing sight of Clint Capela and/or John Collins, who can change the course of a game with offensive rebounding. The big issue — Embiid wore down late under a fairly large workload. After a very good defensive start to the game, his fatigue opened the door for the Hawks in the fourth, Capela rolling right down main street for easy buckets and putbacks in Embiid's territory. I think fatigue is actually an acceptable excuse in this instance, but Embiid wearing down must be noted regardless.

As we have discussed a bunch of times already this season, Embiid is the pace-setter for this team in every way you can think of. When he is engaged, they're going to win more often than not. Without making all the tough midrange shots, he still would have done enough in this one to inspire and lead the group. This version of Embiid is a guy who can lead the Sixers on a big run to get the season back on track.

• I do think the Sixers are closer to turning the corner than not. Though everybody was ready to throw themselves off of a bridge following the loss on Thursday, that's a loss I would throw in the "acceptable" bucket, a night where they couldn't throw it in the ocean and still managed to hang around in part because of their defense. I have very little doubt they're going to score when they're all healthy, so the signs of defensive improvement are important

• Tobias Harris continues to be quite the Swiss army knife for Philadelphia on offense, bodying up smaller players in the post or firing quick catch-and-shoot threes if a possession is centered around somebody else. Embiid has looked determined to get him more touches when Harris gets a smaller defender on his hip in the mid-post, and Harris has rewarded that confidence by bullying players on mismatches.

The veteran forward is seeing the benefits of thinking less when an open shot is created for him. I struggle to think of many times Harris has earned three free throws by hoisting with a defender closing out too hard on him, but with his quicker release now on the scouting report, Harris managed to draw a foul on an attempt on the corner on Saturday. We might start seeing that happen more often if the new Harris is here to stay.

In late-game situations, I actually think Harris has deserved to have his number called more recently. Maxey has forced up some tough, off-angle shots in big moments recently, even with Harris playing efficient basketball and getting favorable matchups at his money spots on the floor.

• Tyrese Maxey desperately needed some shots to go down, and it looked like we'd have to wait at least another game for that to happen after he smoked a decent layup attempt early in the first half. A little over halfway through the first quarter, though, and he had his moment, finishing through contact in transition for an and-one layup.

(Brief interlude: the officials allegedly said it was not a shooting foul and didn't give him continuation, but he shot two free-throws despite the fact that Atlanta wasn't in the penalty. Someone's going to have to give me an explanation on that one.)

Even though the shot didn't end up counting, it seemed to be all Maxey needed to get rolling. After hitting a corner three late in the first quarter on a nice find from Embiid, Maxey got to work in the pick-and-roll in the second quarter, rediscovering his touch on runners after a brutal stretch prior to Saturday night. The Hawks seemed happy to concede midrange looks to Maxey throughout the game, and though the Sixers have tried to coax him out of taking too many runners and floaters, he capitalized on the space Atlanta conceded to him, depositing a series of touch shots to enter halftime with an efficient 14.

Maxey and Embiid were not as crisp as Harden and Embiid in the pick-and-roll, but the more time they get together, the crisper it looks. The young guard is increasingly aware of where to get Embiid the ball and how, dropping pass after pass off into his shooting pocket. Trust and communication between those two is as important, if not more important than the bond between the two big-name stars, because Maxey is going to be the ballhandler in basically all of the bench units Embiid plays with. The more comfortable they get running the offense together, the more impactful those minutes become, and the easier it gets to run away with games.

(I almost think things went a little too well for Maxey in this one because he needed to share the ball a bit more late in the game. The Sixers do not need to see many contested 20-foot jumpers from him in fourth quarters, if ever, certainly not coming out of a timeout.)

• Just what the Sixers have been dying for, a resurgent performance from Furkan Korkmaz. I'm only half joking because they've needed a lift of any sort from their bench guys as the team tries to figure out exactly what this rotation looks like. Korkmaz hasn't seen much time this year, but his multi-faceted skills give him a chance to contribute in a pinch.

After the prospect of Korkmaz helping out with some ball-handling came up pregame, Korkmaz got a shot to play in the first quarter and went to work.

Unfortunately, he suffered a knee injury at some point during his run, and the Sixers ruled him out the game before halftime hit. Brutal.

• The Sixers were in absolute cruise control in this game against a team that looked totally uninterested in playing defense, and they still somehow managed to let the Hawks feel like this was a game in the third quarter. It's hard to overstate how bad their bench has been, and in fairness, I suppose that's what happens when your best bench guy and a starter are both out of the lineup.

I will not pin Philadelphia's problems on Paul Reed, even though Paul Reed was not very good during his minutes again on Saturday. But Embiid hitting the bench was basically a guarantee that they would bleed points. In eight minutes through the first three quarters, Reed was a -10, with just a single rebound and four fouls to his name. Not being able to survive without Embiid has been a theme for basically his entire tenure here, and it's depressing that they haven't managed to figure that out.

The starters hit the snooze button themselves after going up by 20+, naturally, committing some brutal mental mistakes in the tail end of the third. The worst was an errant pass from Tobias Harris, who fired a ball to the corner where Danuel House Jr. used to be, only to realize House had left the space a good 2-3 seconds prior, watching helplessly as the pass went out of bounds.

Philadelphia's punishment for playing with their food was having to play their best guys deep into the fourth quarter, something that should not have been necessary if they had killed the game off in the third as they should have. Up 27 at one point in the third quarter, they had to lean on Embiid and Co. to preserve the lead in the late stages of the fourth even as it became clear the starters were running out of gas. With a back-to-back looming, they might end up paying for this sooner than later.

• Let's put it this way — Dejounte Murray is not a good matchup for Tyrese Maxey on the defensive end. The Sixers probably made the right move putting him there and using Matisse Thybulle to pester Trae Young, but they had to live with some ugly moments in the other guard matchup. Not much you can do. Murray is both very good and way too big for

• Might have to start pricing a split into these back-to-back miniseries moving forward. With one team coming off of a loss and the previous winner not having the same urgency as they would in a playoff series, it's set up for the first winner to rest on their laurels.

• You can tell Doc Rivers is feeling some heat when he's making offense/defense subs with 25 seconds left in the first quarter. Bringing Maxey and Embiid in for a single possession worked out beautifully for Philly, but that's not a spot you'll normally see all that much urgency in.