Down three starters, Sixers beat Nets with nothing more than hard work 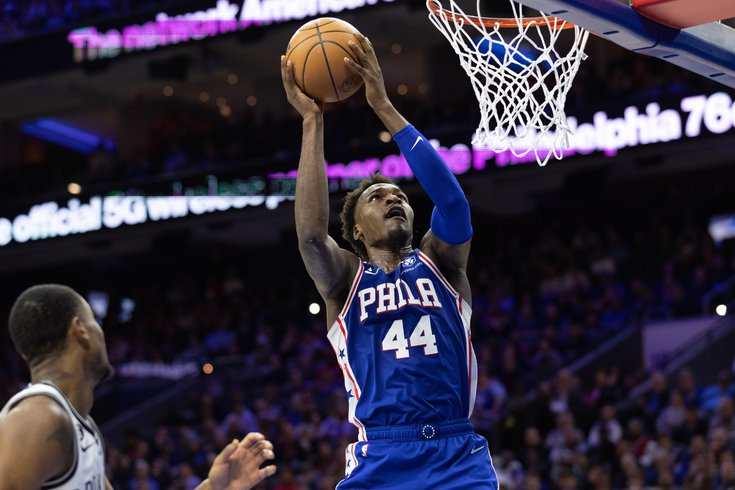 You can sit a room full of people down for an NBA game and come out of that watch party with dozens of answers for why a team won or lost a game. Was it an individual assignment gone wrong? A heroic shooting night from a role player? Star players shining in crunch time? If you try, you can make it as complicated as you want to.

There was nothing to debate in Ben Simmons' return to Philadelphia. The Sixers beat the Nets because they outworked them, with little explanation needed beyond that.

"We won a game where the other team shot 55 percent," Doc Rivers said tonight. "That's all loose balls, we have to win the garbage game. And I thought we did that tonight."

"It's what we needed. Tonight's a game where you saw it in front of you, whether they played well or not our guys were going to compete. They came out, I thought Durant was going to end up with 50 early. And nobody wavered."

Philadelphia took 19 more shot attempts than the Nets, pulling down a whopping 20 offensive rebounds across 48 minutes of basketball. Even moments that felt dispiriting for Philadelphia, like Matisse Thybulle missing two open threes in the corner on one possession, felt better because they had managed to create the extra opportunity in the first place.

It was a stark contrast to Brooklyn's effort, which was shocking in a game that held extra significance (to say the least) for Ben Simmons. Rather than rallying behind their teammate and finding a little something extra, the Nets gifted the shorthanded Sixers chances to go out and steal a win down three starters.

Tobias Harris played second-half hero for Philadelphia, shaking off a miserable start to slowly put Brooklyn away in the second half. Joe Harris, a walking traffic cone for most of the second half, was a frequent victim of Philadelphia's Harris, who took him down to the mid-post and simply killed him over and over again.

For a moment, it appeared he wouldn't get the chance to have the final say in this game. An ankle injury looked bad enough to knock Harris out of this game, but his trip to the locker room for a look and a bit of meditation got him in the right frame of mind to close this game out.

"Sometimes, and Tobias is a great case, guys want to win so bad that they can't, they get in their own way," Rivers said Tuesday. "Tobias wanted to win that game, you could feel it, for whatever reason he wanted to win. But because of that, he was in his own way, and I tell you, going back in the locker room and meditating and whatever he did, you could see a different guy when he came back out."

"Obviously even today before the game, not fully 100 percent, but I wasn't allowing us to go out there with four starters on the bench," Harris added. "I came back in the third quarter, did a little stuff in the hallway here, and I said I'm good enough to go and give something. Then went out there and did a crazy dunk, so it felt good at that point."

For Philadelphia to get to that point, they needed contributions from guys up and down the rotation. After a start Rivers feared would lead Kevin Durant to a 50-point game, the Sixers held Durant to just six points in the second half and 20 overall, P.J. Tucker getting into his chest all night in an effort that eventually wore him down. Shake Milton went on a personal 6-0 run during a critical moment in the fourth quarter, running the floor to score a put-=back layup in transition after De'Anthony Melton's initial attempt fell harmlessly off of the rim.

It's a fairly nondescript play where you probably wouldn't have killed Milton for letting Melton handle the whole thing himself, a potential breakaway that his backcourt mate was in a great position to finish with no assistance. But a little bit of extra effort and the desire to see every play through ended up being exactly what Philadelphia needed at that moment, helping them kill the game off and draw a white flag from the Brooklyn bench. Just compare his reaction to Joe Harris, who drags ass up the floor until it's clear he might actually need to do something.

Nobody embodied Philadelphia's night quite like Paul Reed, whose best (and sometimes worst) trait is how hard he goes whenever he is on the floor. He has twice drawn the ire of Georges Niang this season for fighting his own teammate for a rebound and giving the ball back to the other team in the process, unable to restrain himself as a shot-contester or in general. Tuesday, he played the best NBA game of his young career, a 19-point, 10-rebound effort that saw him consistently getting the better of Simmons when the returning foe spent time at center.

"I'm just recognizing that I don't have to do as much," Reed said Tuesday. "Really just set more screens and roll, that's where my opportunity's going to come from. Just understanding the game better with more reps."

Truthfully, it was often that simple. Set a screen, get your butt moving toward the basket, and capitalize on the lack of attention Brooklyn paid all night long. Empowered to hit the offensive glass, Reed often emerged as the only willing rebounder in a sea of Nets players, cutting through their air space for easy follow-ups.

Reed, largely defined by an all-gas and no-brakes mentality, found a way to live in the middle ground against Brooklyn. He sat far enough back on pick-and-rolls to deflect lob attempts, close enough to pick up a pair of blocks around the basket, composed enough to commit just a single foul in 31 minutes of action. His minute count might be the most impressive part of his evening, Reed playing the vast majority of the second half after barely knowing if his number would be called most of this season.

After the game, Reed told reporters he has worked with a trainer to make sure his conditioning is up to par when he gets his opportunities. It would have been a prudent move even if Joel Embiid had been available for this game, a way for Reed to stay ready as he competes for minutes with Montrezl Harrell every night. Watching Reed go full throttle until the moment he was sent to the bench with an ovation in the fourth quarter, that work may well have been the difference between Philadelphia winning and losing. The Sixers were a whopping +21 with Reed on the floor against Brooklyn.

The mental relentlessness of the group was just as important as positioning or physical exertion. Niang gave the Sixers valuable shooting off the bench yet again, and Harris said after the game that Niang jawing at Kevin Durant helped inspire their best, knowing they had to match that energy and (of course) remain on call if he got into trouble. The most insightful moment of the night came from Harris, who dismissed that their motivation was about Simmons and alluded to a more important calling than showing up Simmons' team.

"The guys that we have out there on the court are amazing players, who everyone has a story and a journey of how they fought for this position," Harris said Tuesday. "When you get presented this type of opportunity where new guys are playing minutes, it’s easy to say, hey, they’re down four starters. But you get four new guys in there who were playing 8-10 minutes, now they’re playing 32 minutes. So it’s an amazing opportunity."

"And for me, just being a part of that and building up guys’ confidence out there on the floor, leading and just bringing it like everybody was tonight, that makes you want to win games more than anything. That’s where my mindset was, even from two days ago when we heard about the news about Tyrese [Maxey] and Joel."

The sincerity of that message was shown on the floor. A weak effort from an opponent is only as valuable as your own preparation and response to that moment. The Nets left the door open for the Sixers, sure, but Philadelphia didn't walk through so much as they blew the door off of the hinges, going from a team that rarely creates second chances to a glass-cleaning, loose ball-retrieving machine for at least one night.

In the day-to-day slog of the NBA regular season, it was a good reminder that, yes, you can sometimes create your own luck. And with their stars on the shelf, it's an example they'll have to follow in the days and weeks ahead, one game at a time.