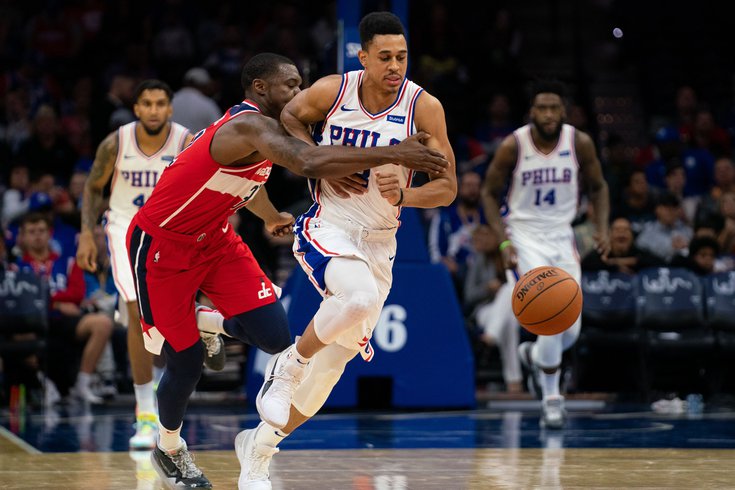 Philadelphia 76ers guard Zhaire Smith (8) is fouled as he attempts to dribbles past Washington Wizards Jalen Jones during the fourth quarter at Wells Fargo Center.

Sixers wing Zhaire Smith will miss the Orlando restart as a result of a bone bruise in his left knee, a team source confirmed to PhillyVoice on Tuesday evening. Derek Bodner of The Athletic was the first to report the news on Tuesday.

Smith, who has spent most of the season in the G-League with the Delaware Blue Coats, began feeling pain in his knee before the Sixers resumed workouts early last week, and the team says he began receiving treatment immediately. The Sixers are expecting Smith to make a full recovery from the injury, but he is not expected to rejoin the team at any point during the Orlando restart.

It's another disappointing setback for a player who has had a tough go of it during his first two years in the league. After breaking his foot during an offseason workout prior to his rookie season, Smith suffered a severe allergic reaction that required hospitalization and surgery, losing weight and the bulk of his first year to recovery. Since then, Smith has had minimal reps at the NBA level, spending the vast majority of his time with the Blue Coats.

The rookie year complications altered what was already going to be a long road for Smith. Exchanged for local product Mikal Bridges on draft night, many in the organization expected Smith's rookie season to feature extensive G-League work even before his injury and allergic reaction, the expectation being he would focus on the transition from small-ish college power forward to NBA wing.

In the time between his initial injury and now, the Sixers dramatically accelerated their push to contend, first trading for Jimmy Butler and later inking an aging Al Horford to an expensive deal (a move they facilitated in part by shedding Markelle Fultz's future salary at the 2019 trade deadline). That impacted the roster as a whole, but especially a player like Smith, who would benefit from decreased expectations and open minutes in the rotation that simply aren't there.

The only good news for Smith is that he will be able to continue his treatment/rehab at the Sixers' practice facility, preparing for a 2020-21 season that may end up looking just as unorthodox as the season we're about to (hopefully) see finish.

In Orlando, Smith would have been on the outside of the rotation looking in, but in a strange way, the fragility of the situation would have benefitted players like him. Whether due to the potential of positive COVID-19 tests or the likelihood of star players playing fewer minutes leading into the playoffs, opportunities could be there for members of the expanded Orlando roster. But Smith finds himself the victim of bad luck and timing once again.

That has been the story of his career to date, and while it's a small concern compared to what many are going through around the world right now, it's hard not to feel bad for the kid.