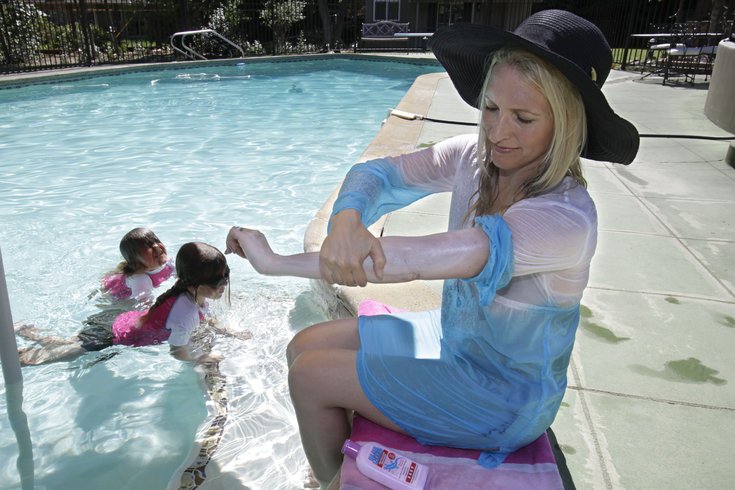 Lisa Andrews applies sunscreen while poolside with her daughters Lauryn, 4, and Elliana, 6, at their home in Carmichael, California. Andrews was 35 when she was diagnosed with malignant melanoma that had to be removed from her leg.

One by one, a group of adults stare into the lens of a camera and talk to their 16-year-old selves about the risk of developing skin cancer.

“One bad sunburn before you turn 18 doubles your chances of developing melanoma,” one woman says as she lifts up her blue blouse to show a scar on her stomach from where a cancerous growth was removed.

She, and the other survivors in the video, are lucky, they say: “There is less than a 10 percent chance of surviving more than five years if you don’t catch it early.”

Their stories, shared in the Viral Tales video, are meant to raise awareness of the risk of developing melanoma and prevent others from suffering a similar - or worse - fate.

A recent report issued by the U.S. surgeon general revealed there has been a 200 percent increase in melanoma cases in the United States since 1973, with skin cancer being the most common form of all cancers in the U.S. and a leading cause of death in young adults, killing one person every hour, according to the National Cancer Institute.

Current estimates are that one in five Americans will develop skin cancer during their lifetime.

Aside from the obvious method of avoiding over-exposure to the sun, the Skin Cancer Foundation recommends the following tips:

• Apply broad-spectrum sunscreen with an SPF of 30 or higher often when outdoors for an extended period of time.

• Practice monthly self-examinations of your skin to check for any new or changing lesions that might be cancerous or precancerous.

• See a dermatologist at least once a year.