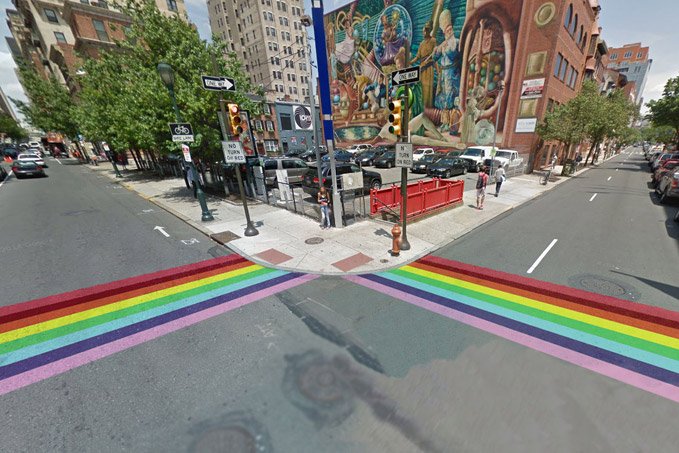 Philadelphia's Gayborhood got its first rainbow-colored crosswalks, and nobody took them to task in Twitter's Battle Of #HeterosexualPrideDay.

Police say a man who was seen pounding away with a sledgehammer at a crosswalk in Philadelphia's LGBT community on Monday night was with the water department, PhillyMag reports.

Witnesses told NBC10 the man began hammering at the rainbow crosswalk at 13th and Locust streets in what's known as the Gayborhood around 10:25 p.m.

"There was a man in the middle of the road with a sledgehammer beating the rainbow sidewalks with it and another man came up behind and began chiseling with him," witness Michael Depiano told NBC10.

The men left the scene before police arrived, leaving minor damage to the rainbow section of the street.

Initial reports suggested the incident was an act of vandalism. However, Philadelphia police Officer Palmiero told PhillyMag that it was the "water department on location working."

John DiGiulio, a spokesman for the Philadelphia Water Department, later confirmed that crews were in the area.

"The Water Department recognizes that the work that we performed last night at the intersection of 13th and Locust caused some concern amongst citizens in the area," DiGiulio said in a statement.

"While the work being performed was not unusual, we apologize for the disturbance and any misunderstanding regarding the nature of our activities. While the crews last night were simply performing their duties to inspect for a leak that was reported to us, we understand that without a marked vehicle in the immediate vicinity, it was not obvious to the casual observer that we were performing legitimate utility work. The leak, originally reported at Broad and Locust is still being investigated."

DiGiulio said it is likely that PWD crews will return to the area of 13th and Locust, or other nearby locations, in order to identify the source of the leak and that employees should be easily identified through Water Department attire.

Watch an onlooker's cellphone video of the incident here.