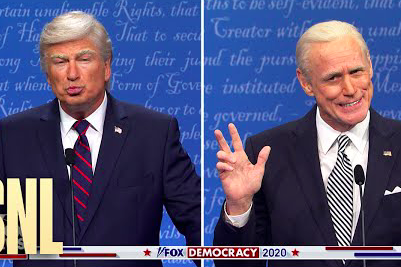 For the better part of four years, Jim Carrey has been railing against President Donald Trump through his artwork. The actor tweets drawing after drawing of the president in grotesque poses that mirror current events in America, imploring anyone and everyone to lift the country out of its current predicament.

This country’s a place people want to have pride in,
But Trump brought us chaos and started dividin’,
Now good folks are looking for a hole they can hide in,
It was easy decidin’ --
I’m Ridin’ with Biden!
See you Oct 3rd on SNL.🔥 pic.twitter.com/5RLAQ8q79f

It came as little surprise that Carrey leaped at the opportunity to take on the role of Joe Biden for the new season of "Saturday Night Live," which debuted last night after days of socially distanced filming. The premiere aired live before a limited audience of first responders at the Rockefeller Center.

With President Trump's COVID-19 diagnosis coming late Friday, a reimagined debate between Biden and Trump (Alec Baldwin) managed to squeeze in the late-breaking developments in a slick way. During a disastrous back-and-forth, including an interruption from Maya Rudolph as Kamala Harris, Biden whips out an Xfinity remote and pauses Trump to deliver a monologue.

He wonders aloud whether science and karma might conspire to teach the president a lesson.

But as Trump stands frozen, Carrey's Biden delivers perhaps the most forceful line of the show's cold open.

"Isn't that satisfying, just not to hear his voice for a single God damn second?" Carrey said. "Let's roll with it. Let's bask in the Trumplessness!"

The return was hosted by Chris Rock, who offered a pandemic's worth of social observations about politics and relationships. He also led segments on the NBA Bubble in Orlando, staging a draft of eager women for the lonely players quarantined without intimacy, and a COVID-19 super-spreader event at a name-change office in Pittsburgh.

The "Weekend Update" tackled Trump's COVID-19 diagnosis, dismissing moralists who find nothing funny about it.

"The problem is, it's almost too funny," said co-host Michael Che. "It's so on the nose. It's like if I were making fun of people who wear belts and then my pants just immediately fell down."

Head over to SNL's YouTube channel to catch more highlights from the season premiere.