In 'We're All Doomed,' comedian paints picture of 'raging hellscape' in 2020 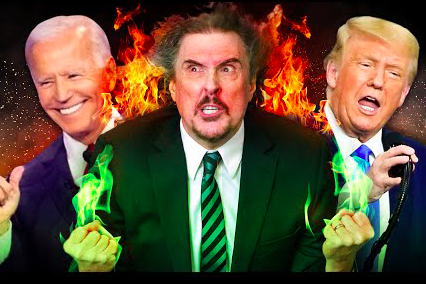 Many political commentators have praised Fox News anchor Chris Wallace for doing his best to reign in the chaos of Tuesday night's ear-splitting presidential debate between Donald Trump and Joe Biden.

It was a valiant try, as Wallace employed disarming humor and the tone of a conflict avoidant teacher who's been pushed too far while being observed.

If the event proved anything, it's that there's probably only one person truly qualified for the impossible job of debate moderation in 2020. That would be Weird Al Yankovic.

In the aftermath of the debate, Weird Al dropped a mash-up video in which he replaced Wallace as the moderator. It's set to a dance track and a theme of America's impending apocalypse.

People in Philadelphia got a kick out of Trump saying bad things happen here — there's plenty of merch going around — and that moment naturally makes a cameo in Weird Al's rendition.

To make the video, Weird Al teamed up with The Gregory Brothers, who are known for their online series "Songify the News."

We can probably expect a more tempered debate between Mike Pence and Kamala Harris on Wednesday but Trump and Biden will get back to it for round two on Oct. 15.