Some on-court observations from the Sixers’ loss to Utah

While Hillary Clinton campaigned at a huge Independence Mall rally on Election Eve, the Sixers hosted a Utah Jazz team in front of a sparse crowd a few miles away at Wells Fargo Center. Like most of the league, this Jazz group has pretty much owned the Sixers during the Process era, capturing the series’ last seven games coming into Monday night’s tilt.

Make it eight. Playing on a back-to-back, what is shaping up to be a very good Jazz team methodically dismantled the Sixers to the tune of a 109-84 final. Here’s some of what I saw:

•    I mentioned how the Sixers have struggled with Utah, and from here, the main reason tonight was the Jazz depth. Utah legitimately goes 11 or 12 deep when everyone is healthy, and without Jerryd Bayless, Ben Simmons, and Nerlens Noel available to play, the Sixers take a pretty big hit when they go to the bench. Rough night for the subs: 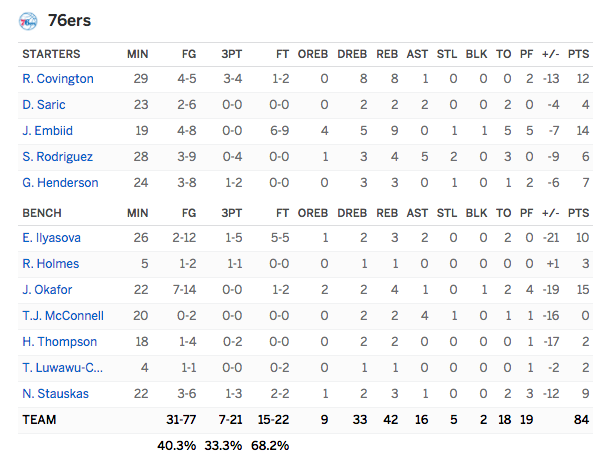 I would be surprised if Utah wasn’t in the Western Conference playoffs at season’s end. As much as it was a frustrating night and poor overall effort for the Sixers, the Jazz have been a bad matchup for them ever since Rudy Gobert was inserted into the starting lineup two years ago.

“They’re an excellent defensive team and you saw it from their backcourt disrupting our point guards,” Brett Brown said. “You saw it with their interior defense, they had 11 blocked shots as a team. They’re a good defensive team.”

•    Speaking of the bench, Quin Snyder had little mercy for another Duke Blue Devil in Jahlil Okafor. This is par for the course for a criminal mastermind:

Even without their primary ball-handler in George Hill, the Jazz simply shifted the playmaking duties a couple of their talented wings (Rodney Hood, Gordon Hayward), who ran Okafor and Joel Embiid through the ringer on what felt like every offensive possession.

“They’re a really good pick-and-roll team,” Okafor said. “That was one of our many issues that we did have tonight and better communication.

In fairness to Okafor, who really struggled defensively, the wing defense in front of him wasn’t anything to write home about either. In garbage time, the second-year center did have a couple of pretty impressive dunks on Gobert:

•    It had to be a relief for Robert Covington just to see the ball go through the basket on his first two attempts in the first quarter. Before the game, Brown was asked about Covington’s tough start to the season offensively.

“We try to make light of it in some ways,” Brown said. “I learned that Klay Thompson is shooting two percentage points better than Robert’s 17. So you’ve got Klay, an Olympian, an all-star, and all of that, rolling in at 19 percent. 17 doesn’t look so bad.”

Brown thinks that Covington’s shot will come around, and you know what? I do too. And after a meeting with the coach, Covington finished with 12 points on 4-5 shooting from deep.

“Just seeing certain aspects of everything and telling me, ‘Stay confident,’” Covington said. “Shots are going to fall. I went through a cold streak last year, and [he said] don’t lose confidence in your shot.”

•    Joel Embiid had a heck of challenge in front of him in the towering presence of “The Stifle Tower,” Gobert. Embiid struggled in two areas that aren’t particularly new, turnovers (five, with zero assists) and fouls (five, in 19 minutes). Despite a decent line otherwise (14 points on 4-8 FG, 9 rebounds), this wasn’t a great performance for the Sixers’ potential star center. On the defensive end, Embiid was too aggressive at times in trying to challenge plays that weren’t there.

Embiid got off to a slow start offensively, but “The Process” played a big part in forcing Gobert to foul out in just 20 minutes.

“They were digging a lot when I had the ball in the post and they have a good shot-blocker behind them and they just did their job,” Embiid said.

They did, and just like we’ve seen over the past few years, the Jazz always do their job against the undermanned Sixers. Perhaps when and if Embiid has a few more weapons around him, the Sixers may be able to keep up.