'Drive off the Ben Franklin Bridge for Harambe' event is canceled, folks

It’s been more than three months since we lost Harambe, the silverback gorilla who died by bullet after a child fell into his enclosure at the Cincinnati Zoo.

We’re all still dealing with it in a variety of ways, ranging from meme creation and social-media account deletion to think pieces, tributes and tears.

As with many things internet, the Harambe aftermath has brought people together and driven them apart in pretty much inexplicable ways.

Who knows why we do what we do; we just do.

Which is to say I don’t know why I pay attention to Harambe-related events, I just do. So, of course I noticed a local event created by a Temple University student.

It is called “Drive Your Car Off the Ben Franklin Bridge for Harambe.” Well, it was.

Setting aside the fact that, unless you drive like Jahlil Okafor, your car probably would land on the PATCO High Speedline tracks if it breached the protective barriers, it warranted closer inspection.

The “event” was the brainchild of Adam Kohlbus. To wit:

1000 PEOPLE ARE DRIVING OFF THE BEN FRANKLIN BRIDGE FOR HARAMBE

I was supposed to make money off my Harambe event but it got reported so i made a new one. Please share

Please come! I was offered money by a dude 2 promote his event through this page if enough people say they're coming https://t.co/rvkG1X57oU

Just say you're going to the event, maybe invite friends, and mute notifications if you want! I need 1k going and 1k interested

It is an exciting time to be alive, which is something you wouldn't be if you drove off the Ben Franklin Bridge on Nov. 11. Kohlbus' brainchild did raise a couple eyebrows, though not to the point of people thinking it made light of suicide. 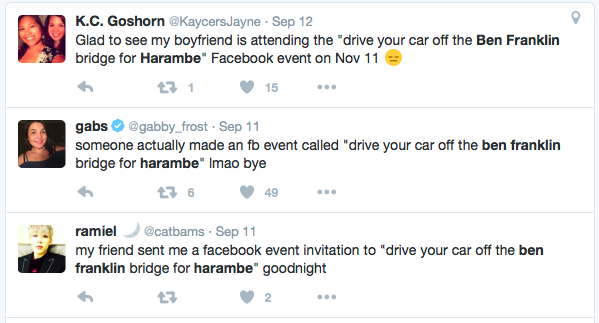 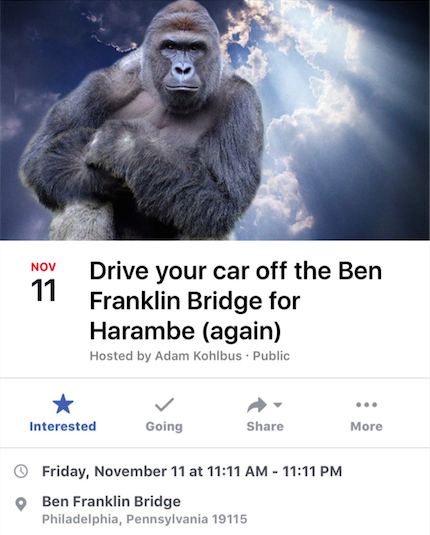 In the past three days, though, the event has been canceled, per Kohlbus, a York, Pennsylvania, native studying viola performance at Temple.

Asked via Twitter whether the event was canceled, Kohlbus offered a one-word response: “Yes.” We followed up with an email exchange in which he explained from where the idea came, and why it's no longer a thing that will happen (even though it really never was going to in the first place).

"The event was just a whim of an idea. I saw similar events, and wanted to make one," he wrote. "I had really only intended for it to be a joke between me and some friends but then it blew up within a day."

As for the nanny state that took it down, he chalked that up to Facebook, which removed an event listing not once but twice, "both times for violating their terms and agreements."

Here's hoping their terms and agreements aren't anti-Harambe, but pro-living. All told, though, this is probably for the best.

As much as we mourn Harambe’s loss – amid an array of meme-y events, tribute videos and social-media posts – he wouldn’t want us to drive off the Ben Franklin Bridge and plunge 135 feet to our deaths, even though some of those who can't stand the Harambe meme might disagree.