Sources: Doc Rivers to be hired as next Sixers head coach 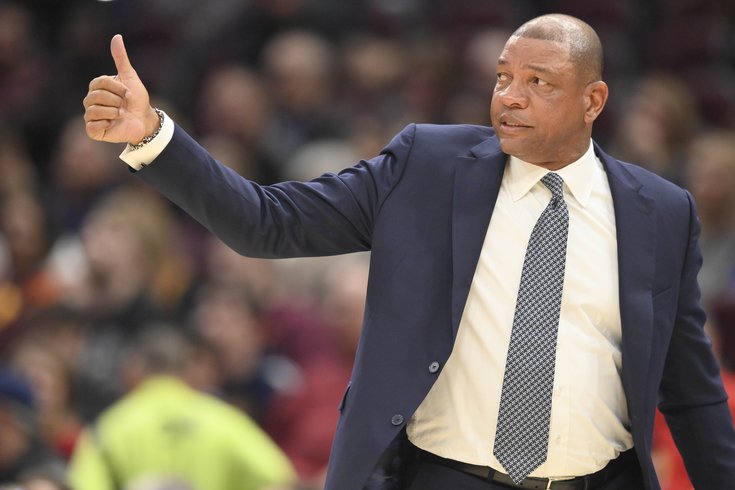 Doc Rivers will be the next head coach of the Philadelphia 76ers, a team source confirmed to PhillyVoice. ESPN's Adrian Wojnarowski was first to report.

Rivers' title will be head coach and he will not have front office duties as part of his hire, a source told PhillyVoice on Thursday evening.

A winner of 943 games across 21 seasons, Rivers (along with an infusion of talent) built a culture for the Los Angeles Clippers from the ground up. That was reflected both in record and in what the team had to endure away from the floor, most notably the racism scandal that finally got former owner Donald Sterling ousted from the NBA.

Steering the Clippers through the Sterling controversy in his first season as head coach speaks to Rivers’ ability to lead even within the most backwards organizations. That’s a needed quality for an organization that has lacked stability and leadership coming from the top, and Rivers provides the Sixers with a respected, steady voice to lead them into the future.

Rivers is in rare territory as an NBA head coach, a so-called "players coach" who nonetheless is a no-nonsense leader of men. It's what allowed him to ultimately have success with personalities that were all over the map.

In Boston, Rivers won a title with a multi-talented, rim-protecting five and a point guard who couldn't shoot. In L.A., his arrival coincided with Blake Griffin's best-ever season, where he took over as the first option in Chris Paul's absence and led the Clippers to 57 wins in 2013-14.

Griffin's growth as a multidimensional weapon continued the next season, with his improved passing (and eventually, improved shooting) rounding out a robust offensive game. Those experiences, and his ability to convince Kevin Garnett into playing full-time five during the later Boston years, show the touch of a coach who could help Embiid and Simmons get to the next level.

There are some immediate concerns rolled into the hire. Rivers is a mixed bag tactically — he has been able to extract surplus value from undermanned teams, has a fairly strong ATO package, and has ultimately overseen teams with strong regular season measurables. But talented teams have buckled under his watch on multiple occasions, and recent history shows worrying signs the Sixers should take note of.

The Lob City Clippers were a famously petulant bunch whose best player cited Rivers as a reason he eventually wanted out, and the new-look Clips with Paul George and Kawhi Leonard flamed out early in the second round this season. For long stretches of the season and their most recent playoff run, L.A. was a rudderless ship, with no coherent defensive vision or offensive chemistry in their collapse against Denver.

That series loss made Rivers the first coach in NBA history to blow a 3-1 lead for the third time in a playoff series, just as he was the first coach to blow a 3-1 lead for the second time. Rivers can trend toward stubborn, sticking with “his guys” in spite of the need for a shake-up, a common criticism of Brett Brown during his tenure. He is not known for impactful adjustments as much as he is building a solid Plan A and believing that will be enough to win the day.

There’s an argument that a solid Plan A is all Philadelphia needs on offense to get to the next level. And for all his warts, Rivers probably has the highest floor of the three potential hires. His teams have been good to very good for most of 12 straight seasons, always in the mix to make noise when the playoffs roll around.

When the Clippers traded a first-round pick to Boston for him, Rivers became the senior VP of basketball operations for Los Angeles on top of being named coach. Even after giving up the formal title in 2017, Rivers continued to have a powerful voice alongside Lawrence Frank in the Clippers’ front office. And though Rivers is said to not have front office duties as part of his hiring, it will be interesting to see if he feels the need to assert his authority on roster decisions with developing GM Elton Brand runnings things in Philly. Rivers will have a powerful voice in any case.

We’ll learn more about his aims and what drew him to Philadelphia soon enough, but Rivers clearly made an impression in spite of how late in the process he entered the mix. If he can make as strong of an impression on the players as he did on organizational brass, next season figures to be a lot more compelling for Philadelphia.