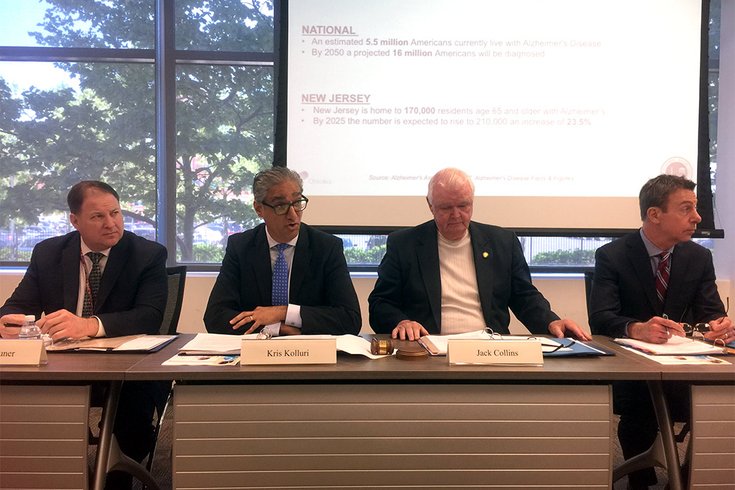 The Rowan/Rutgers Joint Board announced Tuesday the creation of an Alzheimer’s Patient Navigation Model, a first-in-the-nation certificate program through Camden County College to train individuals to support people with Alzheimer’s as well as their families and caregivers as they manage the disease.

Three South Jersey colleges are taking an innovative approach to help the families of Alzheimer’s patients.

The Alzheimer’s Journey Coordinator Certificate Program, announced Tuesday and planned for a fall 2018 launch, will expand the medical and education footprint of the Rowan University/Rutgers-Camden Board of Governors, as well as create careers for graduates of the one-year program.

An initial pilot class of 20 Camden County College students will be housed in a new medical building under construction near the Cooper Medical School of Rowan in the heart of Camden.

The program is expected to borrow from a patient navigator plan studied by Otsuka, a New Jersey pharmaceutical company and one of the business collaborators with the board of governors, and by the work of the Global Council on Alzheimer’s Disease, according to Kris Kolluri, the CEO of the board.

Alzheimer's is typically managed by family members who serve as uncompensated caregivers during much of the disease's eight to 10-year progression. It comes with no clear roadmap for those caregivers.

The program is meant as a “unique, innovative solution for addressing the growing needs of those affected by Alzheimer’s,” according to Mary Michael, Otsuka’s vice president of patient advocacy and stakeholder management.

Jack Collins, the board of governors chairman, predicted the program will have significant benefits for residents of Camden.

The program, which will seek funding sources to allow the residents of an underserved community such as Camden to get service at a reasonable cost, should alleviate some of the stress of decision-making and delivery of services to both caregivers and patients.

The plan is for each facilitator to manage the care of eight to 10 patients, from initial diagnosis to death, a continuity not delivered in any current model, Kolluri said. The facilitator would be the single point of contact with doctor and hospital visits, home visits by providers, Medicare, and other social and medical providers.

A panel of community members with experience in dealing with Alzheimer's is expected to help shape the program’s curriculum.

One, Dr. Anita Chopra, the director of the New Jersey Institute for Successful Aging at Rowan, pointed out that it has been 13 years since any new medication for the disease has been released. She said the program will address the lack of attention on the disease.

Michelline Davis, a Camden native who now runs the largest healthcare system in the state, became emotional on Tuesday, her voice wavering, as she spoke of her own experience in giving care for a grandmother and mother with Alzheimer's.

She spoke of her pain and frustration as they "literally slip away."

Davis will be on the advisory board.