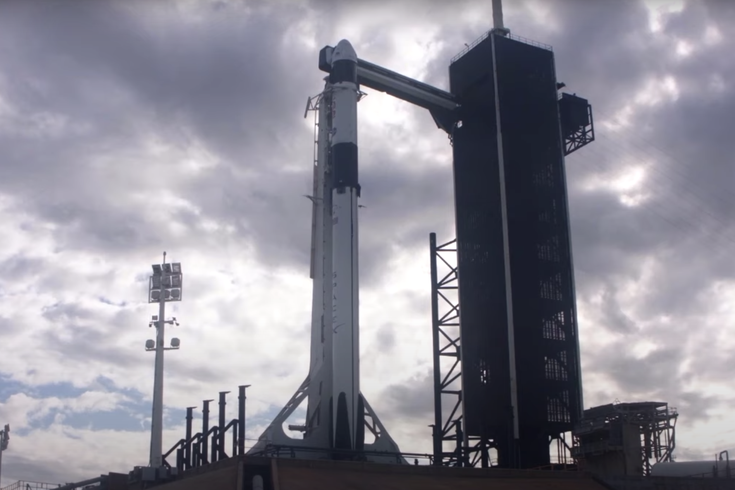 SpaceX's Falcon 9 carried the Crew Dragon spacecraft 'Resilience' into orbit, and it is expected to reach the International Space Station on Monday evening.

Falcon 9 carried the Crew Dragon spacecraft "Resilience" into orbit, and it is expected to reach the International Space Station on Monday evening.

"With this milestone NASA and SpaceX have changed the historical arc of human space transportation," NASA director of commercial spaceflight development Phil McAlister said to NBC.

You can watch the launch here:

Falcon 9 took off from the Kennedy Space Center in Florida at 7:27 p.m. and carried NASA astronauts Mike Hopkins, Victor Glover and Shannon Walker, along with Soichi Noguch, an astronaut with the Japanese space agency JAXA.

One day, NASA astronauts and anyone with the money will be able to buy a ticket to space, the New York Times reported.

"It marks the end of the development phase of the system," Phil McAlister, director of commercial spaceflight development at NASA, said to the Times. "For the first time in history, there is a commercial capability from a private sector entity to safely and reliably transport people to space."

They plan to spend the next six months at the International Space Station, conducting microgravity studies and other scientific research.

NASA's Commercial Crew program and SpaceX developed the Crew Dragon with the intention of launching six operational missions, costing more than $3 billion. Crew Dragon is the first of those six.

Down the road, tourists will be making their way to the ISS, as well. Houston-based start up Axiom has a deal with SpaceX to launch 3 privately paying tourists into space in the second half of 2021.

That launch will be the first U.S. tourism mission to space, a historic moment for space travel. The estimated per-seat cost comes out to $55 million, and a Falcon 9 rocket costs around $62 million.

Boeing is also developing its Starliner spacecraft, though it experienced significant challenges with an uncrewed flight test almost a year ago, CNBC reported. NASA's Commercial Crew has awarded Boeing with $4.8 billion in contracts to develop that project.